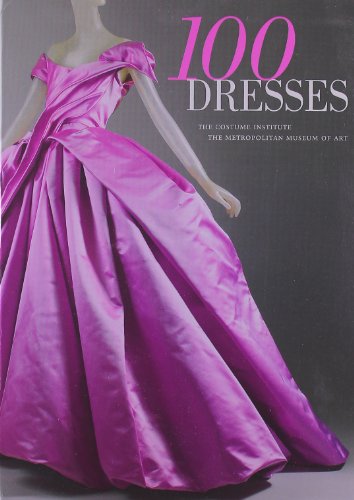 100 Dresses: The Costume Institute / The Metropolitan Museum of Art

There's something about a dress.

Growing up, I wore dresses only to church and piano recitals. I was a tomboy, and I can't remember a single time in my childhood when I chose to wear a dress; most days I actually wore boys' clothing, because that's what I liked. (Half a century earlier, I would have been forced to wear a dress to school).

But then came my junior-year prom, and for the first time in my life, I fell in love with a dress. I was shopping by myself for a gown—a prospect about which I was not very excited—when I came across a sleek, floor-grazing, navy sheath. It was simple and classy, at once modest and elegant, with stylish lines around the clavicle and striking straps. In it I was at home in a way I hadn't been before in something so formal. I wore the dress with long, navy gloves, and I think it was the first time in my life I felt utterly lovely.

The arc of my story with the dress is not unlike others I have heard: for many women my age, the dress has been to some degree or another discovered. It is no longer the primary article worn by women as they go about their days, a deviation after thousands of years otherwise. We live in a remarkable time—and a time that is ripe for the Metropolitan Museum of Art's 100 Dresses.

100 Dresses exalts this uniquely feminine but oft-discarded garment, showing pictorially its history over the last three and a half centuries through vivid photographs of the MMA's own gown collection. The dress is not dead, 100 Dresses brilliantly reminds us. It may no longer reign in the domestic sphere, but the dress is still evolving; its tale is a fascinating one, and the story's not over.

The dress with which we're most familiar finds its ancestry in the classical Roman toga or Greek himation—wide pieces of fabric draped loosely around the body. In the early modern era, thanks in part to the almost comically extravagant King Louis XIV, dresses became more and more figure-shaping, exhibited well by the 18th-century corset—a cage of cloth and whalebone into which a woman literally stuffed her torso. And consider the French court dresses of the late 1700s: whalebone and wire created the "hips" for gowns that stuck out nearly two and a half feet on either side of a woman's waist! Women had to turn completely sideways to get through a door frame.

Thankfully, the five-foot hips slimmed down after a decade or so, but opulence had to be evident somehow, and in the 1820s and '30s it went straight to the biceps, in gigantic creampuff sleeves that hit right above the elbow. At the opening of the 20th century, the most fashionable gown shaped a woman into a voluptuous "S-curve," her largely undefined "monobosom" pushing forward, her derrière sticking back and out.

It wasn't until around 1910 that fashion allowed fabric, once again, to simply fall on a woman's figure. Finally. (The female figure doesn't really need contrived contours, does it?) Designers such as Emanuel Ungaro strove for this simplicity and even stretched back for classical inspiration for their gowns: long, unbroken panels of material fitted to create a modern gracefulness (my absolute favorite is Ungaro's Evening Ensemble). While avant-garde designers playfully explored abstract ideas such as innocence (Christian Francis Roth's "Rothola" Crayon Dress) and movement (Issey Miyake's colorful and accordion-like "Flying Saucer" Dress), others, such as Coco Chanel and Claire McCardell, sought to marry the feminine with pragmatism.

In many respects, the 20th century was a Golden Age for the dress. Women in earlier times could hardly have imagined such an abundance of "ready-to-wear" dresses: factory-produced apparel ranging from the strictly utilitarian to the sumptuous. A vast array of women's magazines translated the idioms of Paris and Milan for readers in the suburbs. And yet even while the dress flourished as never before, countertrends were already underway.

World War II had brought a new need for practicality in women's clothing. With the introduction of pants into the female wardrobe, a trend begun by women forced to take on factory jobs in the absence of their husbands, and the sweeping changes in women's roles that gained momentum in the 1960s and '70s, dresses eventually became largely equated with formal wear. When I asked Wikipedia about dresses, I was told they are "often used by young girls and as more formal attire by adult women." I cringed at that seemingly narrow relegation, but how could I prove it to be otherwise, outside Mennonite pockets and Amish country? I grew up in the deep South—the wealthy deep South, where expectations about appearance run high—and when I go into the neighborhood grocery store on visits back home, most of the women are in sportswear, whether they've been exercising or not.