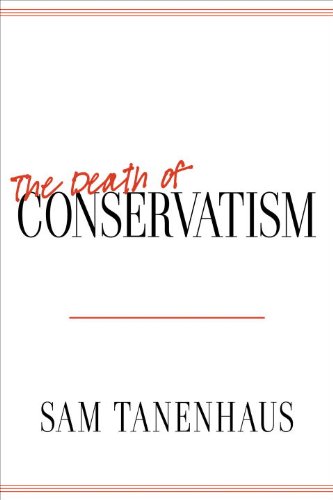 Day of the Dead?

The fate of the conservative movement.

The death of conservatism. Titles and quotations flood the mind; two questions emerge: Does death become her? Or might this be just one more greatly exaggerated report?

Sam Tanenhaus, the editor of The New York Times Book Review, appears to answer both questions with no. "Since its founding," he states, "our nation has been productively divided between liberal and conservative impulses," impulses that by their very collision have, happily, fostered the "dialectic of our infinitely renewable politics." But this hopeful judgment comes only as Tanenhaus brings his considerably less hopeful argument to a close. He launches into it with a chapter called "Rigor Mortis," the beginning of an extended—and lively—autopsy of a political persuasion turned into a movement turned into a head case, unable or unwilling to save itself, and jeopardizing not simply the Republican party but the nation itself. Tanenhaus, be assured, is no grave-dancer. He steps forward instead as a eulogist, delivering an appreciative but troubled meditation to the friends of the deceased, part tract, part historical essay.

The tract part is narrow, sharp, and convincing. The GOP experienced collapse in 2008, Tanenhaus believes, because "movement conservatives" spent eight years neglecting governance and angling for triumph, ideological triumph, heedless of history, culture, and, above all, civility. George W. Bush, more Reagan than Reagan, pursued the aims of the movement with revanchist (one of Tanenhaus' keywords) fervor—with, in fact, "dogmatic fixity"—and this is precisely why his presidency failed.

Tanenhaus is particularly appalled because of all people, he contends, conservatives should have known better, still living as they do in the shadow of the great 18th-century conservative statesmen Edmund Burke, who emerges as the dominant intellectual presence of the book. While Burke in an age of crisis fought, both as a politician and as a theorist, for a politics of adjustment, a politics of the possible, the Republican revanchists (think Goldwater, Gingrich, and Rove) have for five decades recognized little moral worth, much less beauty, in a tempered, moderating approach to ruling. "The movement conservatives of our time seem the heirs of the French rather than the American Revolution," Tanenhaus concludes. And due to this unseemly identity and style, "movement conservatism is not simply in retreat, it is outmoded."

How it got there is the topic of the historical essay, the larger part of this book. Tanenhaus writes with pleasing pace and keen observation, drawing on a rich knowledge of the key figures in the history of postwar politics, particularly Whitaker Chambers (whose biography he has written) and William F. Buckley, Jr. (whose biography he is writing). There's promise of a great book in this little one.

But for now, Tanenhaus' historical argument, though sharp and suggestive, is less satisfying than his thesis on governance. This is no surprise—it's one thing to articulate a philosophic point, it's another to capture the complexities of a historical moment. And what seems to be fundamentally missing from his attempt to do so is intellectual sympathy. For the great pathos of modern conservatism has little shaping effect on Tanenhaus' account of it.

What is this pathos? It is the pathos that seized the philosopher Alasdair MacIntyre at the very beginning of the Reagan years, when in After Virtue he coolly argued that in Western civilization "the integral substance of morality has to a large degree been fragmented and then in part destroyed." It's the pathos that suffuses the sociologist Philip Rieff's brilliant treatise The Triumph of the Therapeutic, published fifteen years earlier. "The question," Rieff frankly stated, "is no longer as Dostoevski put it: 'Can civilized men believe?' Rather: 'Can unbelieving men be civilized?' " Both MacIntyre and Rieff were galaxies away from "movement conservatism." But both were convinced—as many others across the political spectrum had been—that this great historical shift was far more than a moment of "transition." It was from this profoundly unsettling apprehension of an awful new historical order, as historians such as Patrick Allitt and John T. McGreevy have shown, that the postwar "new conservativism" emerged.

To be sure, Tanenhaus at one level understands this; his work on Chambers and Buckley shows the fruit of it. Yet, in good Vital Center fashion, he seems to more or less expect today's conservatives to just deal with it, to move on, to stop the extended wailing. As he writes (with Burke in the background), "Ideology must submit itself to political reality." At one level, this is inarguable. But does Tanenhaus really expect that we'll all simply agree to suspend belief in the lost collective vision—that of humans as eternal beings caught in a magnificent yet harrowing cosmic drama—and classify it as a vestige we can't now afford to quarrel over?