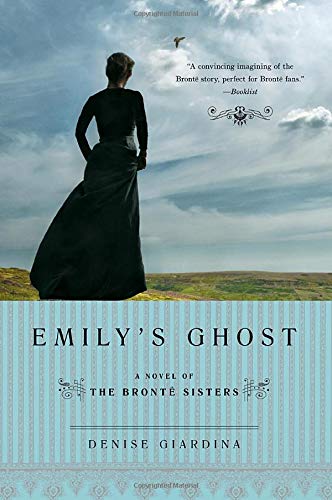 The latest entry in the Brontë family literary sweepstakes.

Or at least she does according to the latest entry in the Brontë family literary sweepstakes, Denise Giardina's Emily's Ghost. To be fair, Emily only gets all Sixth Sense-y in the beginning and ending sections of Giardina's novel (somehow, I guess, the otherworldly presences just aren't as convenient or necessary in the vast middle chapters of the novel). And lest the reader believe that these voices are evidence of schizophrenia or a matter of purely imaginative inner dialogue (the latter a possibility that Anne Brontë raises at one point in the novel), Giardina has her Emily affirm quite forcefully the reality of her auditory companions. What's more, Giardina's Emily is ardently and actively political (a Chartist, no less); strongly and nobly rebellious against everything well-established in early Victorian society; and the participant in a passionate, if unconsummated, romance. Throw in a pinch of plot elements taken from Jane Eyre and a dash of Jo March-style hair-chopping, and you begin to get the idea of the portrait of Emily Brontë this book gives us.

In some ways, none of this is surprising. Giardina simply amalgamates and creatively recycles several of the ongoing strands of Brontë myths. In the 161 years since her death, Emily Brontë has been the subject of intense curiosity and vast speculation. The verifiable facts about Brontë—who did not have a full-length biography devoted to her until 1883—are relatively sparse: Emily had no friends outside her family circle, and though she was shy with outsiders, she was forceful with her sisters. Her imaginative life was deeply submerged throughout her life in the imaginary kingdom of Gondal that she created as a child with her sister Anne. She enjoyed and performed the majority of the housework at her father's parsonage in Haworth. She was known to have been a great lover of nature and animals, an inveterate walker of the Yorkshire moors. She is said to have been an excellent pianist. Of the three sisters, Emily worked the least amount of time outside the home and had the least formal education, only 18 months total spread out over almost twenty years. Documentary evidence is similarly slim: in addition to Wuthering Heights and her poetry, we have three brief notes to Charlotte's friend, Ellen Nussey; essays she wrote while at school in Brussels; sketches; part of an account book; and four "diary papers." What does seem clear is that Emily Brontë was extremely inward-focused, deeply imaginative, highly connected to the natural world, and genuinely contented with her life at home. Yet this dearth of material has never seemed to stop the flow of biographical supposition, including Giardina's. As Lucasta Miller, author of the exceptionally astute The Brontë Myth has observed:

Lack of biographical data has made Emily's powerful and enigmatic novel [Wuthering Heights] seem all the more obscure, and the combination of the two has left her riper for mystification than the other members of her family. Wafting across the moors in a cloud of Yorkshire mist, the so-called sphinx of English literature has acquired almost supernatural status. The absences surrounding her have made her all the more magnetic and some colourful apocrypha has emerged to fill the gaps.

And it is colorful stuff, indeed. Emily Brontë has been portrayed as an anorexic, a psychic, a psychotic (given to Heathcliffean levels of violence and temper), and a "sadistic goddess." A cousin to Giardina's ghost-haunted Emily is the frequent depiction of Brontë as a mystic, given to descending into trance-states or to receiving visions. Her religion has been described as pantheistic, progressively Christian, heterodox, atheistic, and even (surprisingly) Roman Catholic. She is said to have been suicidal—willing her death so she could merge with the Eternal—and to have been strongly opposed to death, fighting to the bitter end (though refusing to receive medical help).

Though not a shred of evidence exists in contemporaneous sources that points to Emily Brontë ever having even a romantic interest of any kind, speculation about her love life abounds in similarly contradictory and bizarre directions. She has been figured as a lesbian, an asexual virgin, a tomboy filled with "sexless purity," "a fierce, impassioned Vestal." It has been variously claimed that she had an incestuous relationship with her sister Anne, with her brother Branwell, with her father Patrick (who, in one play, fathers a child by Emily). Others have suggested a relationship with a demon lover (a vampire version of Wuthering Heights surely cannot be far away) or a spiritual "union" with God, a love affair with a farmhand or with her teacher in Brussels (and Charlotte's unrequited love), Constantin Heger. Charlotte's eventual husband, Arthur Bell Nichols (who barely knew Emily—despite Giardina's portrayal of him in her novel) has also been a candidate. Perhaps most amusing is the case of Virginia Moore, author of The Life and Eager Death of Emily Brontë (1936), who confidently asserted that, based on one of Emily's poems, she had finally discovered the name of Emily's lover: Louis Parensell—only to have it exposed that she had misread Brontë's handwriting of the poem's title, "Love's Farewell."