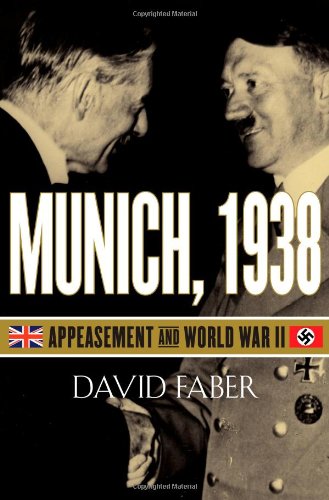 "A New Era of Friendship and Prosperity"

How "compromise" with Hitler was achieved—and at what cost.

On August 26, 1938, British Prime Minister Neville Chamberlain dispatched a letter to every member of his Cabinet, most of whom were on holiday, summoning them to Downing Street to discuss "recent developments in the international situation, with particular reference to Czechoslovakia." The recent developments were relentlessly grim. Nazi Party operatives were stirring up violence in the Sudetenland, the ethnically German area of Czechoslovakia, as a prelude to annexing the region. Czech leaders were becoming increasingly embittered by British diplomatic pressure to submit to the effectual conversion of the Sudetenland into an independent Nazi state. Hitler's military preparations were reportedly in full swing. The Treaty of Versailles, which had imposed strict limits on Germany's military and territorial claims because of its role in the Great War, was beginning to unravel.

The Conservative Prime Minister was determined to quash any mood of militarism that might arise within his Cabinet. "No State, certainly no Democratic State, ought to make a threat of war unless it was both ready to carry it out and prepared to do so," he told them. Britain was grotesquely unprepared for war. Nevertheless, Duff Cooper, First Lord of the Admiralty, asked for a partial mobilization of the fleet. Chamberlain rebuffed him: "It was very important not to exacerbate feeling in Berlin against us."

After a three-hour meeting, that supreme objective was achieved—momentarily. "There was to be no change in policy, no new diplomatic initiative, and no warning sent to Berlin," writes David Faber in Munich, 1938: Appeasement and World War II. "No decision had even been taken as to what Britain's response should be if Germany did indeed attack Czechoslovakia." Yet Chamberlain got exactly what he wanted—Cabinet support for a scheme to avert war at any cost. Thus Europe's tortuous descent into a policy of appeasement was complete: a diplomatic delusion that triumphantly delivered Czechoslovakia into Nazi hands, setting the stage for Hitler's lightning assault on Europe.

Faber, a former Conservative MP, recounts the details of Britain's capitulation to Hitler with an extensive use of diaries and notes from political leaders, diplomats, and their inner circles. The crucial weeks leading up to the Munich Pact—in which Britain, France, and Italy traded the territorial integrity of Czechoslovakia for a German promise of peace in Europe—are familiar territory. Hitler pledges that "this is the last territorial claim I have to make in Europe." France, which had signed a treaty of mutual assistance with Czechoslovakia, insists that its obligations "are sacred, and cannot be evaded." Chamberlain returns to London waving his paper agreement with Hitler and declaring "peace for our time." Yet although we know the outcome all too well, Faber's account is far from superfluous. His richly detailed and tightly paced narrative sheds light on how the betrayal of a democratic ally in the cause of peace, despite all evidence to the contrary, became thinkable.

One of the fascinating subplots of Faber's retelling is how the British press abdicated its role as watchdog and slavishly supported government policy. When Anthony Eden, one of the few hawks in government, resigned his post as Foreign Secretary, most of the press sighed in relief. The Daily Mail praised Chamberlain's "realism and sound common sense" against his detractors. Winston Churchill, Eden's ally and a Conservative backbencher, was distraught: "There seemed one strong young figure standing up against long, dismal, drawling tides of drift and surrender, of wrong measurements and feeble impulses," he wrote. "Now he was gone." With few exceptions, the national papers continually sought to downplay Hitler's growing belligerence, or excused it by faulting the punitive Treaty of Versailles. The Times even extolled the "advantages to Czechoslovakia of becoming a homogenous State"—that is, becoming dismembered by German occupation. Faber's work suggests that we need a fuller account of the British media's ideological collusion with pacifists and political powerbrokers.

Faber's description of the euphoria that followed Chamberlain's diplomatic initiative still rattles the senses. King George VI praised "the magnificent efforts of the Prime Minister" and expressed hope that "a new era of friendship and prosperity may be dawning among the peoples of the world." The Pope sent Chamberlain a cross. President Roosevelt's message was brief but congratulatory: "Good man." The press was almost universally uncritical, especially The Times: "No conqueror returning from a victory on the battlefield has come home adorned with nobler laurels than Mr. Chamberlain from Munich yesterday." In the days following, Chamberlain received over 20,000 letters and telegrams from a thankful nation and equally grateful allies. The House of Commons, after cheers and sustained applause, approved the government's policy by a vote of 366 to 144.