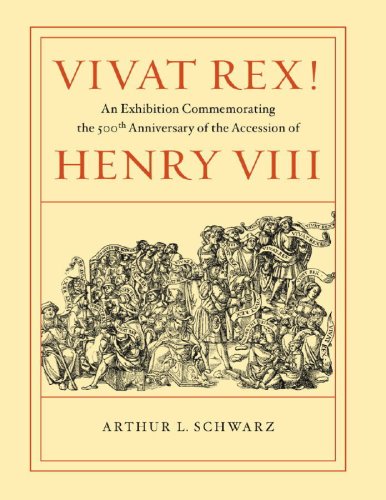 Henry VII, that dull Tudor king who saves the day (as Richmond) at the end of Richard III, didn't, in fact, live forever, despite the triumphalist impression that concludes Shakespeare's play. The real king died at 11:00 on the night of April 21, 1509. Two days later, after some jostling for power by counselors and courtiers, his 17-year-old son was proclaimed Henry VIII. This new king of England would be many things, as this splendid catalogue to the exhibition Vivat Rex! makes clear. This much has always been clear: Henry VIII was never dull.

The exhibition, which commemorates the 500th anniversary of Henry's accession, includes rare books, iconic portraits, engravings and aquatints, and sundry other items and curios borrowed from the Grolier Club (which hosted the exhibition in New York City this spring), the Folger Shakespeare Library, Harvard's Houghton Library, the Morgan Library, and elsewhere. The show will return stateside, to the Folger Library in Washington, D. C., in the fall of 2010. In the meantime, the catalogue handsomely reproduces the many objects on display, along with ample commentary: detailed captions accompanying each item; short chapter summaries that distinguish and contextualize the many phases of Henry VIII's life; and, most substantively, three opening essays by leading scholars on, respectively, this king's personification of power, his divorce from Catherine of Aragon and its seismic consequences, and the reformation he initiated within the English Church. This last essay, by Susan Wabuda, is the longest of the three, and nicely surveys the complexities of religious change under Henry, from his break with the Roman Catholic Church and the Dissolution of the monasteries to his reactionary anti-Lutheranism late in life.

The exhibition's curator, Arthur L. Schwartz, acknowledges that some information is occasionally repeated throughout the volume. He defends himself by saying the overlap will help readers who may not know the period well, or who may prefer to read around amid the entries. Such readers will be well served, but as a Tudor devotee who has lately read this volume from start to finish, I can report that this or that repetition was hardly off-putting; in fact, the unfamiliar and informed alike will find much to enjoy in this visually rich collection, which presents the memorable tumults that marked Henry VIII's long reign. (Tudor Englishmen would have used the word "hurlyburly.") Less defensible is Schwartz's rather simplistic view of the experiences of the faithful before and after the Reformation: one's entire existence in early Christendom, he declares, was dominated by fear, followed by a Protestant liberation from the "threat of the terrors of hell." Really? A brief encounter with either St. Bernard or Marlowe's Doctor Faustus would confirm this historical summary as overgeneralizing at best. Fortunately Schwartz is far more sound as a collector and bibliographer.

Henry VIII is never a historical figure to get lost in a crowd, but a large part of what made him and his era so memorable were the many people around him—serving him, loved by him, challenging him, destroyed by him—from the good and great to the terribly abused. The sixteen thumbnail portraits that constitute the catalogue's frontispiece announce this fact from the outset. Here, for instance, is the older brother, Arthur, whose early death ensured Henry's monarchy as well as the first of many marriage fiascoes that would unsettle it. Here is Henry's main rival in Renaissance splendor, the French king Francis I, and the fashionably frenchified second wife of Henry, Anne Boleyn, whom he eventually beheaded (Dale Hoak in his essay speaks of "five long and sexually frustrating years" before Henry married Anne). Thomas Cranmer and Thomas Cromwell are here as well, who so hugely influenced English worship and policy during this period, and royal victims such as the humanist martyr Thomas More and Cardinal Wolsey, as represented by John Gielgud in a 1957 production of Henry VIII.

Wolsey made the fatal mistake of overgoing his own king when it came to displays of riches; he eventually gave to Henry his opulent residence of Hampton Court, but his destruction proved to be inescapable. A preoccupation with splendor marks Henry VIII as England's first great Renaissance king, and he was sensitive to outdazzling his rivals on the Continent. His and Francis I's ostentatiously chivalric meeting at the Field of the Cloth of Gold was, according to Schwartz, a "display of wealth rarely seen in human history." Henry would come to own sixty residences and two thousand tapestries, and a roll of the New Year's gifts he received in 1539 spanned eight and a half feet. Finally, there are among these first portraits various images of the king himself, including an engraving from old age where he most resembles (forgive me) a Mr. Potato Head whose pinched look brings to mind the medieval cruelties of a Finno-Ural tyrant.