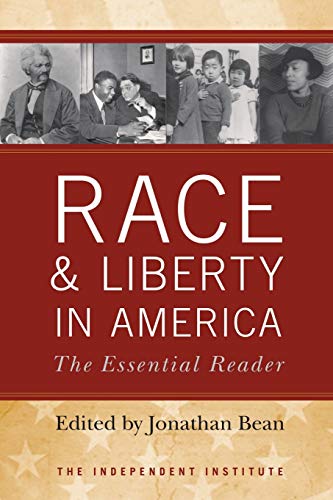 This compilation of primary documents, with short introductions by the editor along with an introductory and concluding chapter, is meant for classroom use. University classrooms, Jonathan Bean suggests, are virtual propaganda cells in which brave students who dare to raise any argument from the classical liberal tradition are " 'shut down' in silence" until they have parroted the "correct answers they have found in other discussion readers." This anthology, by contrast, aims to free students to "consider another way of looking at the world."

In my experience, this text actually represents almost exactly how the great majority of my students look at the world. But perhaps I'm the anomaly who somehow has student survivors of the Manchurian treatment administered to them in the academy. Supposing that college classrooms nationwide are sanitized of any germs of classical liberal thought before students are allowed to enter them, let us consider this anthology in the spirit in which it is offered. Appropriate for a classroom, let's start with a pop quiz:

A. Little except they all discussed race, and most deplored racism, at some point in their lives, albeit for entirely different reasons and with little or no common philosophical basis otherwise—indeed, often for reasons that contradicted others on this list. Or is it,

B. They were all representatives of the "classical liberal tradition," all believing in and acting on its "fundamental doctrines of individual freedom from government control, the Constitution as a guarantor of freedom, color-blind law, and capitalism," in contradistinction to "left-wing liberalism, with its emphasis on group rights, government power, and hostility to free market capitalism" [and, usually, religious belief].

Jonathan Bean's answer, as you probably guessed, is (B), and this collection of primary documents is an argument in defense of the proposition that the classical liberal tradition, because of its hostility to government power and group rights, has been the primary force in forging racial justice and freedom in American history.

My answer is closer to (A). What the author sees as a tradition, I would suggest is more like an imagined community—emphasis on imagined.

Key in assessing this kind of text are the following questions: do the documents selected here cohere in presenting a unified classical liberal tradition that students don't know about, but need to understand in order to comprehend the history of racial equality? Further, does the text present a rich assortment of documents, with appropriately nuanced and historically informed introductions, showing the variety and sheer human complexity of the large topics it addresses?

The answer is no. But before explaining why, a few words about the virtues of the anthology. Perhaps most important, the text resurrects some little-anthologized or relatively forgotten authors, writers, and editors, especially black authors. Students will learn much from contrasting the usual suspects in anthologies of black writing with figures such as the "black Mencken" George Schulyer, the black business tycoon S. B. Fuller, the more contemporary author Anne Wortham, and the religion professor Kelly Miller. All of these (and more, including contemporary columnist Walter Williams and political activist Ward Connerly) get their say here. Likewise for R. C. Hoiles, the important newspaper publisher and founder of Freedom Communications (and owner of my local paper, the Colorado Springs Gazette), who articulated a philosophy that Barry Goldwater later took national. Heroically, Hoiles stood against Japanese internment during World War II when few others did; his critique of FDR's internment policy is reproduced here.

Likewise, the latter part of the text introduces some more complex figures, such as Stanley Crouch and Stephen L. Carter, who in reality don't fit very well into any tradition (as Bean acknowledges with Carter). The book concludes with an editorial jeremiad about our two major political parties, both of which allegedly have caved to "diversity liberalism" (don't tell the Republicans on the Senate Judiciary Committee). Thus, while this is an ideologically driven text, it is not partisan.