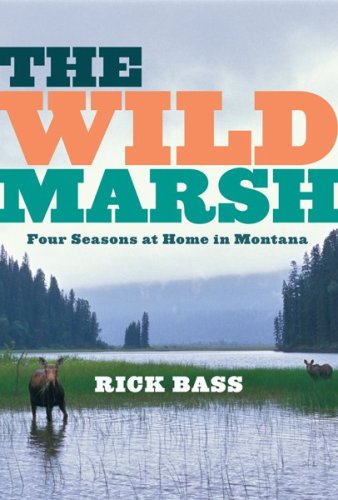 Home on the Yaak

Rick Bass chronicles the passing seasons in a "jewel in the great crown of remaining North American wilderness."

I'm a sucker for the 12-month seasonal essay types of books, but when The Wild Marsh crossed my desk, I hesitated to dive in. I've tried reading environmental activist and author Rick Bass's nonfiction before, and found he tended toward strident rather than prosaic. That's okay if I'm getting ready for a global warming rally but less inviting if I want a good porch-side read.

Bass quickly put my doubts to rest. By his own admission, The Wild Marsh aims to be "all celebration and all observation, without judgment or advocacy." An admirable goal, which of course he falls short of—he can't help preaching the green gospel or lapsing into sermonizing about the environment as he goes—but he does concentrate, as Wendell Berry once said, "on the matter at hand, which is living."

The Wild Marsh was written over the course of a decade, encompassing both the turn of the millennium and 9/11. Bass compresses his observations, then frames them as a year of life lived off the grid with his family in northwest Montana. This is a book about divides in time and in place, as well as a philosophical reflection.

The biggest divide is physical location, his place in Montana's Yaak Valley, remote from the outside world. Bass riffs on the idea of Thoreau's cabin at Walden, using his own Montana writer's cabin overlooking a marsh as a comparison. "I think the idea of holing up and hunkering down against the larger forces of the world has not lots its allure since Thoreau's time. If anything, that instinct, or impulse, continues to reside in almost all of us, sometimes activated or bestirred and other times dormant but always present."

Bass describes the Yaak as "the major ecological turnstile between Yellowstone and the Yukon; it's the rarest and most singular, if not largest, jewel in the great crown of remaining North American wilderness, and yet none of it is protected as such." It's a gateway east and west between Glacier National Park, the Bob Marshall Wilderness, and the Pacific Northwest. It's also, a land of "boggy marshes and buggy wetlands" full of biodiversity.

Not pristine—the loggers have taken care of that—but wild all the same, with a constant parade of wolves, grizzly bears, and other diverse animal life. If you're not from Bass' neck of the woods, you'll find yourself Googling unusual flora and fauna along the way (glacier lilies were new to this midwestern reviewer, as was the long-toed salamander). These potential rabbit trails can make for a slow read, but perhaps more enjoyable for that. The place Bass takes us to is "wilderness," and I like Bass's definition of it: "where you can still disappear to the world, even as in your heart you are finding things." Well said.

Nature lovers can't be in creation for too long without pondering the spiritual, and Bass is no exception. As he writes about extraordinary events, such as a full lunar eclipse on the evening of the winter solstice, or ordinary things, such as the way a certain type of snow sounds "like glass wind chimes," he lapses into gentle, somewhat vague spiritual musings. "Sometimes amid such beauty you can't help but wonder who gave … this life, and perhaps more important, why?" In another passage, he asks, "What dreamer dreamed us, that we might begin dreaming?" At one point, after seeing a bobcat, he writes simply: "Every day is a gift." Bass senses something bigger than himself, but hesitates to name it, or brand it with any theology.

As the year progresses, the reader engages with one lovely essay after another. Each day, Bass writes, "is like another growth ring secreted by the shell of the nautilus, or the cambium of a tree …. These layers … anchor us." It's not all sweetness and light, however. The Yaak can be brutal in its own way: January "even though wonderful … is one long damn month for almost everyone and everything but the wolves and ravens."

Bass describes his battle with depression as influenced by his chosen landscape, describing it as "a strange mix of terror and numbness … heaviness, or sadness, or confusion." Year after year, there is a cumulative impact, "like the effects of too many concussions, each long dark winter a biological hammer blow to the pituitary or some other important gland, irrespective of how much one loves backcountry skiing, or beautiful snowy skies at dusk, or snowshoeing, or sledding, or any of the other infinite wonders of winter." Perhaps some of these blues come from his belief, expressed in another statement, "Again and again, we confuse ourselves as individuals as beings of significance."

Those who police the mechanics of writing will throw up their hands at the competent Bass' passionate love affair with the semicolon and the em dash. But the reader will forgive him, as these long, seemingly endless sentences are packed full of absorbing descriptions.