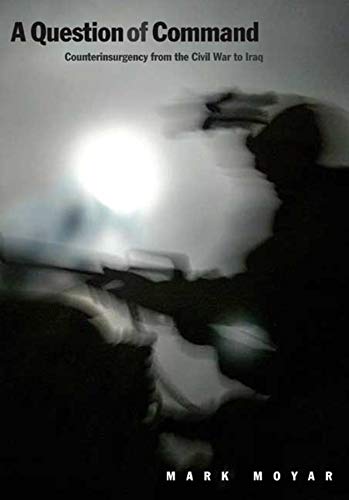 The question of command in counterinsurgency.

When Martin Van Crevald wrote his landmark study Command in War in 1985, he noted that the term itself, symbolized by the initials C3 (command, control, communications), had been in use for only about ten years. But the concept, he added, like "management" in business, is as old as warfare itself. It simply lacked official recognition and definition.

Like most military historians, Van Crevald was presenting command in a conventional war context. His history recognized the essence of command throughout the conflicts waged by such as Napoleon and Bismarck, in both world wars and in the Arab-Israeli wars of the 1960s and '70s.

Now we have a historian who has viewed the same concept in the context of insurgency/counterinsurgency. With the attacks of 9/11, the wars in Iraq and Afghanistan, and the global terrorist threats, the insights of military historian Mark Moyar, Kim T. Adamson Chair of Insurgency and Terrorism at the Marine Corps University, are particularly helpful.

In A Question of Command: Counterinsurgency from the Civil War to Iraq, Moyar applies this timeless concept, probably for the first time, to the types of unconventional threats that civilization will have to meet for the foreseeable future. In so doing, he has turned the debate of how to attack and defeat insurgencies almost completely around. Through the application of historical studies of "command" in earlier insurgencies, he shows how the mastery or neglect of this operational tool by commanders has led to victory or defeat. The result is a brilliant and powerful message that society will neglect at its peril.

There is almost a universal consensus among historians of unconventional war that the capture of "hearts and minds"—the use of military and non-military methods employing broad social, political, and economic reforms to turn the population around—will prevail in most insurgencies. I must confess that in my own academic studies of the subject I have come to firmly embrace this consensus.

And the standard view, expressed by Charles Caldwell, Robert Asprey, Robert Taber, and Edward Lansdale, to name only a few, still has great merit. But Moyar has not so much replaced these theories as he has profoundly added to them. There should be no necessary contradiction between winning hearts and minds and an efficient command system, but a much larger consensus seems to have emerged from this book. This is a most welcome contribution and may eventually save us from tripping over our own feet in the mad rush to discover the proper "metrics," to use Donald Rumfeld's term, to defeat insurgency.

The first priority is to define what "command" entails. If it is so essential, why is it not equally obvious? Why do we even need books to tell us what it is? The answer seems to be that it is encompassing, perhaps even obvious to professionals, but equally elusive to most others. Van Crevald defines "command" in broad categories "as a function that has to be exercised, more or less continuously, if the army is to exist and operate." He goes on to describe its functions in two essential categories. First is the need to "arrange and coordinate everything an army needs to exist"; second is to enable the army "to carry out its proper mission": that is, to destroy the enemy as quickly and as efficiently as possible.

Moyar offers a "leader-centric" approach which, in his own words, sees counterinsurgency as "a contest between elites in which the elite with the superiority in certain leadership attributes usually wins." He notes that this emphasis on leadership is implicit in some earlier studies of counterinsurgency, but "no previous attempt has been made to present this interpretation comprehensively or to find supporting evidence from a wide range of cases."

What, then, are the qualities possessed by good leaders? More than just the weight and mass of force, leadership requires intangible qualities such as charisma, sociability, and flexibility. Applying these qualities inside insurgency, leaders in command should put a premium on persuasive communications, impartial law enforcement, incorruptibility, and respect for personal property. Historically, Moyar argues, the application of such qualities has decided the outcome of most insurgencies.

But how are such qualities obtained? One might think that they should be taught in the great academies. But Moyar believes that they are much more culture-bound and have developed through family traditions, since "cultures and their effects have shown themselves very resistant to deliberate change." He concedes, however, that such traits can be enhanced through "self-improvement and practice," and that senior leaders can coach and inspire such traits among their subordinates through training and education. He also writes that command leadership is often boosted by shared identity between leaders and followers and by experience in command, even if this experience is in fields other than counterinsurgency.