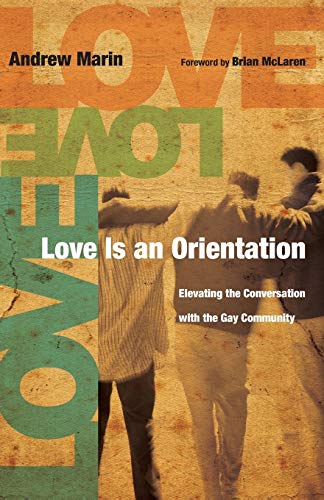 Love Is an Orientation: Elevating the Conversation with the Gay Community
Andrew Marin
IVP Books, 2009
205 pp., 18.00

A plea to evangelical Christians to get serious about loving gay people.

Andrew Marin is a twentysomething graduate of the University of Illinois, Chicago, living in Chicago's Boystown neighborhood. A self-professed "Bible-banging homophobe" as a teenager, Marin experienced an awakening of sorts while in college when several of his closest friends told him they were gay. Determined to try to shed his prejudices, Marin embarked on a mission to get to know as many gay people as he could. He began frequenting gay bars, looking up gay clergy and asking to meet with them, exchanging emails with new gay friends he met online, and showing up at public gay events. The result was the formation of The Marin Foundation, which its website describes as "the very first organization that works to build a bridge between the religious and Gay, Lesbian, Bisexual and Transgender (GLBT) communities in a non-threatening, research and biblically oriented fashion."

Marin's book, which comes with a foreword by Brian McLaren, is written in a folksy, story-laden style, heavy on heartfelt anecdotes. Key points and phrases are repeated relentlessly, suggesting that the translation from PowerPoint to polished manuscript wasn't accomplished as deftly as it might have been.

At the heart of Marin's proposal is a plea to evangelical Christians to get serious about loving GLBT people. Peppered throughout the book are sentences like these: "Put yourself in [GLBT people's] shoes for a moment and try to imagine the feeling of what it's like to first realize you have a same-sex attraction." "Even if Christians don't agree with the GLBT community or what they might stand for, believers in Christ are supposed to know how to find real empathy for those who are going through things we can never understand."

Taken on their own, these repeated injunctions might seem obvious. Who would disagree, after all, with the need for Christians to be more faithful to their foremost ethical commitment, love of neighbors and enemies? And why does it bear such belaboring?

Anticipating this criticism, Marin stresses that the novelty of his proposal lies in what he takes Christian love for GLBT persons to entail—an "elevated" approach by which Christians might engage the gay community. He writes:

To elevate does not mean to ignore [controversial differences]. Rather, elevating the conversation between the GLBT and Christian communities means making a choice to stop the fight, understanding the differences that tear the GLBT and Christian communities apart and then seeking God and his eternal principles that bridge these two groups of people.

Apparently, what sets an "elevated" approach apart from other postures is a commitment to a certain sort of restraint when it comes to argument and an active boldness when it comes to compassion. "No matter how much we might want something for a GLBT person, their convictions and beliefs are ultimately up to them," Marin tells his fellow evangelicals. "Our instinct is to fight, to defend a traditional interpretation of God's posture toward homosexuality. But to respond in such a way, no matter how well intentioned, is to step between the other person and God."

Rather than attempting to debate with GLBT people about the rightness or wrongness of homosexual practice or the shortcomings (perceived or actual) of the GLBT community, Christians should allow God to show them what he wants them to believe and do—what "he feels is best" for their lives, as Marin has it. God's intention, we're told, is "to bring each person to their own crossroads of belief where they make a choice to live distinctly for him or not [and] to recognize from that choice what positively or negatively affects an individual's oneness with the Lord."

What is one to make of all this? Before going further, I should say that, as a celibate gay Christian myself, I am happy to see a book urging Christians to take Christ's commands to love others seriously. If as a result of reading Marin's, more Christians make costly efforts to demonstrate kindness and a humble openness to learn from GLBT persons, I will be glad.

Despite Marin's intentions, though, it's hard not to see his book as embodying some of the more regrettable tendencies of the evangelicalism he's out to elevate. Take this sentence, for example: "[I]f a GLBT person says that God has indicated that it's OK to be gay, the Christian community has to deeply trust and rely on the knowledge that we can never know the end to God's best journey for someone else's life." At one level, a statement like this shows an admirable reticence to pontificate. There's a teachable spirit here and a reluctance to place any hindrance in the way of a person coming to a place of personal faith and repentance. On the other hand, this neatly encapsulates the chief vulnerability of evangelical faith and practice: Just how would God indicate to someone what he thinks is "OK"? And by what criteria—Scripture (but which interpretation)? ecclesiastical tradition (but which one)? the Holy Spirit's inner promptings? charismatic experience?—can one determine whether it's actually God who's indicating it?