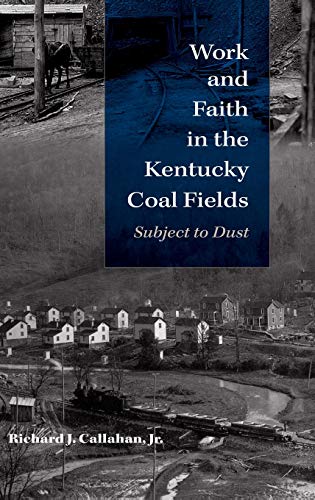 Perhaps in reply to these modernist incursions, Holiness and Pentecostal movements enjoyed rampant success among the mining communities. Chapter 5 of Work and Faith in the Kentucky Coal Fields supplies a "synthetic and speculative" discussion about Holiness religion's emergence and popularity in the coal fields. Due to the limited documentary material, Callahan relies upon Raymond Williams' cultural theory, along with studies of the Holiness movement where the record was stronger, to explain why Holiness found such a strong footing amidst the horizontal mines of eastern Kentucky. This is a moving chapter, especially in its explanatory reading of healing as a popular ritual among miners. "When I can feel him coming into my body," one southern Appalachian believer said, "I know God is real." The somatic repeatedly appears in Callahan's study as he seeks to recover the palpable and the felt aspects of religious lives. "The event of healing," he writes, "made the power of the Holy Ghost concrete and present to witnesses and the person healed." This was a "somatic form of knowledge of the material reality of divine power and its ability to transform the world physically." In short, the laboring affect may have been particularly conducive to Holiness effects.

Callahan moves beyond sectarian borders in his pursuit of religion. "To become a miner," Callahan explains, "was also to be initiated into a community." Mines were theaters of the extreme, where life and death pressed at the edges of every work hour. Between 1902 and 1927, over 2,400 men died in the Appalachians as a result of mine explosions. "The worst thing about living in the mining camp," related one miner from the Blue Diamond Camp in Perry County, "one was always in constant dread … . You couldn't be confident about when the top was going to fall in. Only God above knew." To work day after day in such conditions required an extraordinary sense of solidarity and mutual support. As writer Emma Bell Miles observed of Appalachian culture, "Courage seems to me the keynote of our whole system of religious thought."

The closing chapter of Work and Faith in the Kentucky Coal Fields offers a significant contribution to labor history, offering as it does multiple interpretations of the labor movement that emerged among miners in the 1930s. The plot focuses on two unions—the National Miners' Union and the United Mine Workers of America—and their competition to organize coal miners in the region. While some Christian miners rejected labor leaders as atheists, labor organizers countered with images of suffering and broken bodies reminiscent of Holiness preaching. One local NMU president, also a preacher, demonstrated in a November 1931 labor speech just how overlapping were miner politics and miner faith: "The time is presented to you in the days when the Children of Israel was under bondage, when Moses went to lead them out … . We have the same opportunity presented to us, laboring men, by the National Miner's Union to walk out as the Children of Israel did, and if you don't drown these Capitalists and this Capitalism, it is your own bad luck. You can't blame any one but yourself."

Studies which highlight religious creativity arising from labor, from work, are few and far between. In his carefully composed, usefully complicating narrative of miners and Christianity in Kentucky, Richard Callahan begins what I suspect will be a wave of projects addressing this conspicuously neglected subject. Work and Faith in the Kentucky Coal Fields will be cited for years to come for its compelling argument that "the process of industrialization" was, in Callahan's words, "religiously productive." Callahan's book does for religion and work what one recent study of ritual claims for its subject, namely that "the work of ritual ceaselessly builds a world that, for brief moments, creates pockets of order, pockets of joy, pockets of inspiration."