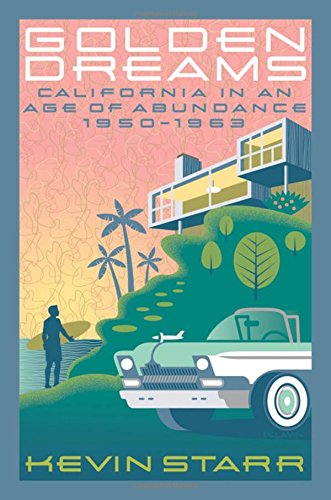 A California State of Mind

The dreams and follies of the nation, writ large.

Americans and the California Dream, 1850-1915, the first volume in Kevin Starr's series on the union's most populous state, appeared in 1973, eight years after the Mamas and the Papas delivered "California Dreamin'," the now cringe-inducing tune that evokes an epoch when one could tag Los Angeles as "safe." The latest installment, Golden Dreams: California in an Age of Abundance, 1950-1963, has just been published by Oxford University Press. Starr's magnum opus—eight volumes to date, and still not complete— will endure the test of years, not least for its heft and its dogged ambition. Students of California history—of the history of the American West generally—have no choice but to confront this impressive oeuvre penned over decades by the State Librarian of California Emeritus, now a professor at the University of Southern California. Even if these works were awful, one would have to be a little dazzled by their vastness. They are far from awful.

Inevitably, yes, there are low moments. The lowest comes in 2002's Embattled Dreams: California in War and Peace, 1940-1950, in the chapter on California-Japan relations before World War II. One gets the sense that Starr had little understanding, as he wrote, of events in the Pacific in the decades before the war. It also seems obvious that his commitment to mistaking the label "racist" for historical explanation controlled what sources he focused on and how he read them. Starr himself refers to items that counter his own account, but he puts them aside in service to the problematic thesis that anti-Japanese feeling among laborers in California was responsible for the war in the Pacific. Starr briefly tries to say that this is not his argument, but one need only read the relevant pages to see that it really is. And while Starr does fleetingly allude to Japanese depredations against the Chinese, he paints the Japanese—as he often paints non-Caucasians—as morally superior victims whose violence was unwillingly extracted from them by a wicked "White California." Had the Japanese bombed the California coast, Starr writes, it "might be considered a justifiable act of revenge for fifty years of insults." One wonders what the Koreans and Chinese, who by 1941 had suffered so much at the feet of Nippon, would say.

But if Starr's work sometimes lurks in the depths, it more often excels and sometimes soars. His account of church efforts in earliest American California rises to the level of literature. Here we read of California perceived as a "precious gift," an Eden to be nurtured and preserved. It's a theme that runs through Starr's narrative, from the first volume in the series through Coast of Dreams: California on the Edge, 1990-2003, published in 2004. (Starr broke the chronological sequence for that volume.)

Early in Golden Dreams, Starr (citing another author) nicely summarizes California's history to about 1950. From wilderness, he writes, the territory of California passed

to native American settlement, to Spanish exploration, to subdivision as land grant ranchos in the Mexican era, to the ensuing American ranch (cattle and sheep), wheat, and orchard era, to the foundation of townships by pioneering developers in the early 1900s, followed by the long and languorous decades that ended abruptly with the post-World War II suburbanization.

So far so good for the Golden State. One imagines, for instance, a small group of protected buffalo grazing on fenced pastures east of Riverside. One saw them en route from Southern California's Inland Empire to Newport Beach or Disneyland (in Anaheim).

But on that trek one could also see what was coming—what the future of such open spaces would be. Already by 1960, Starr writes, California's San Fernando Valley hosted some 840,000 people—more than the current individual populations of North Dakota, South Dakota, Vermont, Alaska, or Wyoming. Today, at about 37 million, California's population is roughly four million greater than Canada's and nearly twice that of Australia. It seems like too many people live in California, particularly when one considers that many of them inhabit earthquake-prone deserts.

As Starr's titles suggest, many have gone to California in pursuit of dreams. Where else, I asked as a Californian teenager, could one have breakfast at a ski resort in the mountains, lunch at the beach, and dinner in the desert—say, in Palm Springs? But eventide visions run into trouble upon the relative clarity of wakefulness. One finds it impossible to resist the cliché about dreams morphing into nightmares.

"If California's problems weren't so serious," a recent USA Today editorial says, "it might be amusing for outsiders to watch the state's tragicomic descent into financial chaos." The editorial continues with a string of indictments: "dysfunctional political system"; "government by ballot initiatives is a disaster"; "[a] something for nothing culture is no way to run a state." Compared to California's managers, we're advised, "the Marx Brothers look competent."