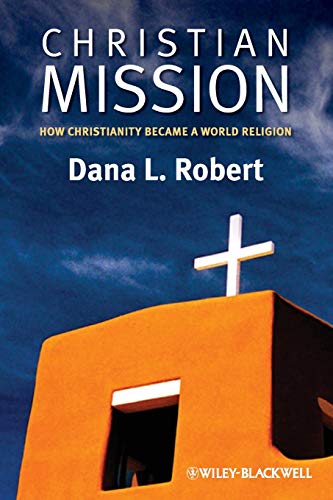 The most interesting chapter in Dana Robert's beautiful new book Christian Mission: How Christianity Became a World Religion (Wiley-Blackwell) describes the relatively recent cult around the feast day of Bernard Mizeki, a Mozambican missionary and martyr who evangelized the Shona of southern Africa in the 19th century. For some time, white Anglicans observed his June 18th feast day with English reserve. And then, amidst the rejection of colonialism, the observance became Africanized, Bernard a symbol of indigenous African Christianity. Gatherings of hundreds at the place where he died became gatherings of hundreds of thousands, where "the mountainside is alive with worship to God." Some aspects of this long weekend celebration are alarming, as with any (humanly) unplanned new movement of the Spirit. For example, one of the many pilgrims seeking healing, already being frail, will likely die during the feast. When this happens it is said that Bernard's spirit takes one person with him in revenge for his martyrdom! Such excess enthusiasm is to be expected alongside vast multilingual communion services, healings, exorcisms, theatrical reenactments of his life, and more.

One might take this enthusiasm to be typical of "African religion"—with the sort of sneer westerners once reserved for animists and Muslims. But with Africa as Christianity's future (as Robert and others prophesy), and such respectful treatments of its layered sophistication as hers, what more faithful thing can we say about such observances of the faith as the cult of Mizeki?

On a recent trip to Uganda I discovered a dramatically different Anglican way of observing revered founding missionaries: in almost total silence. And I saw a very different Roman Catholic way of remembering the same missionary founders. Could Africa's greatest gift to the church catholic through time and space be the blurring of such lines as these ("Catholic" and "Protestant") in a new conflagration of the Spirit?

We all know why Catholics and Protestants have different conceptions of holy space. The Reformers rightly worried that if an object or material space could hold holiness like a ziplock holds water, then people would revere bones, statues, and cathedrals instead of Jesus. Catholics have always responded that material things are blessed since God became matter in Christ and that it is not inappropriate to reverence the church, the eucharist, and the saints in continuity with this fleshy God. Both sides have strong cases.

Last summer I asked (the obviously Catholic) Cardinal Emmanuel Wamala, Archbishop emeritus of Kampala, whether the Methodists were growing in his country. He said, "If it is a religion, it is growing in Uganda." Around 80 percent of Uganda's 30 million people are Christian, with about 1/3 each belonging to Rome and the Anglican communion.

The foundational story in Ugandan Catholicism is that of the Uganda Martyrs. In the mid 1880s, Catholic and Anglican missionaries from France and England were finding some success among the pages who served at the court of the Kabaka, the king of Buganda (that kingdom is still the most powerful of several kingdoms that make up the modern republic of Uganda). A previous Kabaka had been open to Christianity, if a bit confused as to why the English mission agency and the French White Fathers couldn't get along. But his son, Mwanga I, listened to traditionalist religious leaders and Muslims who warned the Christians just wanted his throne. Did not his pages not pray that some other kingdom would come? The Kabaka expected his pages, like sycophants (politics is always politics), to cheer him when he returned from a hunt. Once when they failed to do so, he was enraged to learn they were at the missions. The pages who converted also began resisting the king's sexual advances. Finally Mwanga was alerted that a new mission was approaching from the east. Unfortunately for the Anglican missionary-bishop Hannington, Bugandan legend said a usurper would come from that direction. Once Bishop Hannington was dispatched, the Kabaka's Catholic prime minister, Joseph Mukasa, defiantly told the king he was wrong to kill the bishop. At last the Kabaka demanded that the Christians in his court choose him or Jesus. Forty-five of them, about evenly divided between Catholic and Anglican, chose the King of Kings over the King of Buganda, and paid with their lives: by torture and then slow burning—feet first, to give them a chance to recant. They sang praises to God instead.

The story is important in both Anglican and Catholic communions in Uganda. But Catholics do a bit more to show it. Actually a lot more. Most of the Catholics we met were named for a Ugandan martyr (Ugandans choose their children's surnames in addition to their first names, so they have more names to dole out). Countless institutions like schools, shops, and of course churches are named for Sts. Kizito, Mukasa, Lwanga, Mathias Murumba, and more. The story appears in Catholic stained glass and painting from the greatest to the most humble churches. And the Feast of the Uganda Martyrs is celebrated every year on June 3 with an attendance of some one million people from all over Africa. Dozens of bishops attend and co-preside. These gather near Buganda's Calvary, Namugongo—once Buganda's place of execution. An outdoor pavilion has been built for the throng around the pond where the executioners used to wash after their gruesome work. Pilgrims now bottle that water, once mixed with the blood of martyrs, to drink and bathe in.