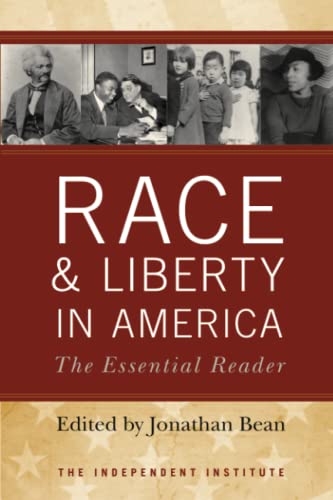 This compilation of primary documents, with short introductions by the editor along with an introductory and concluding chapter, is meant for classroom use. University classrooms, Jonathan Bean suggests, are virtual propaganda cells in which brave students who dare to raise any argument from the classical liberal tradition are " 'shut down' in silence" until they have parroted the "correct answers they have found in other discussion readers." This anthology, by contrast, aims to free students to "consider another way of looking at the world."

In my experience, this text actually represents almost exactly how the great majority of my students look at the world. But perhaps I'm the anomaly who somehow has student survivors of the Manchurian treatment administered to them in the academy. Supposing that college classrooms nationwide are sanitized of any germs of classical liberal thought before students are allowed to enter them, let us consider this anthology in the spirit in which it is offered. Appropriate for a classroom, let's start with a pop quiz:

A. Little except they all discussed race, and most deplored racism, at some point in their lives, albeit for entirely different reasons and with little or no common philosophical basis otherwise—indeed, often for reasons that contradicted others on this list. Or is it,

B. They were all representatives of the "classical liberal tradition," all believing in and acting on its "fundamental doctrines of individual freedom from government control, the Constitution as a guarantor of freedom, color-blind law, and capitalism," in contradistinction to "left-wing liberalism, with its emphasis on group rights, government power, and hostility to free market capitalism" [and, usually, religious belief].

Jonathan Bean's answer, as you probably guessed, is (B), and this collection of primary documents is an argument in defense of the proposition that the classical liberal tradition, because of its hostility to government power and group rights, has been the primary force in forging racial justice and freedom in American history.

My answer is closer to (A). What the author sees as a tradition, I would suggest is more like an imagined community—emphasis on imagined.

Key in assessing this kind of text are the following questions: do the documents selected here cohere in presenting a unified classical liberal tradition that students don't know about, but need to understand in order to comprehend the history of racial equality? Further, does the text present a rich assortment of documents, with appropriately nuanced and historically informed introductions, showing the variety and sheer human complexity of the large topics it addresses?

The answer is no. But before explaining why, a few words about the virtues of the anthology. Perhaps most important, the text resurrects some little-anthologized or relatively forgotten authors, writers, and editors, especially black authors. Students will learn much from contrasting the usual suspects in anthologies of black writing with figures such as the "black Mencken" George Schulyer, the black business tycoon S. B. Fuller, the more contemporary author Anne Wortham, and the religion professor Kelly Miller. All of these (and more, including contemporary columnist Walter Williams and political activist Ward Connerly) get their say here. Likewise for R. C. Hoiles, the important newspaper publisher and founder of Freedom Communications (and owner of my local paper, the Colorado Springs Gazette), who articulated a philosophy that Barry Goldwater later took national. Heroically, Hoiles stood against Japanese internment during World War II when few others did; his critique of FDR's internment policy is reproduced here.

Likewise, the latter part of the text introduces some more complex figures, such as Stanley Crouch and Stephen L. Carter, who in reality don't fit very well into any tradition (as Bean acknowledges with Carter). The book concludes with an editorial jeremiad about our two major political parties, both of which allegedly have caved to "diversity liberalism" (don't tell the Republicans on the Senate Judiciary Committee). Thus, while this is an ideologically driven text, it is not partisan.

Provocation can make for good pedagogy, and I love to champion texts that resurrect understudied authors. Yet this compilation ultimately fails in presenting a coherent argument, for two basic reasons. First, the "tradition" invented here encompasses too many people who were fundamentally and philosophically at odds with one another; the center of this imagined community does not hold. Second, Bean too often fails to investigate the complexity and contradictions within classical liberalism with the same zeal that he applies (especially in the conclusion) to left liberalism. The result is an anthology that mostly cheerleads rather than analyzes, and that quite often grievously distorts and oversimplifies the history of the people and subjects it covers.

Documentary readers work best as provocative pedagogy when they open up a topic. On occasion, this text does that, most successfully in the last chapter. Most of the other chapters fail in this regard. Take for example the treatment of R. C. Hoiles, as unsullied a representative of 20th-century classical liberalism as one can imagine (think Milton Friedman on steroids). The premise of Hoiles' argument against Japanese internment was the same as his argument against government involvement in anything whatsoever. Hoiles' opposition to internment, moreover, must be set in the context of his opposition to every single civil rights bill of the 1950s and 1960s, his defense of private rights of discriminatory behavior, and especially his vitriolic denunciation of all forms of public education, K through PhD. Public education, he said in a document reproduced here, inevitably leads to "moral delinquency."

Nearly all of Hoiles' positions would have enraged that other alleged classical liberal, Frederick Douglass, who fought valiantly for public education after the Civil War, demanded government activism on behalf of the same, and decried the Supreme Court's disastrous 1883 decision which (on classical liberal grounds) found unconstitutional the Civil Rights Bill of 1875. Douglass is the single most reproduced author in the entire volume and emerges at the end as the heroic "omni-American."

Douglass certainly drew (as did most antislavery activists) from the classical liberal tradition, and the contribution of classical liberalism to the antislavery movement stands as its proudest moment. But of course, the most representatives defenders of that classical liberal tradition were southerners such as Jefferson Davis and Alexander Stephens, who perceived the Republicans as the party of big government, conspiring to take away local authority, individual freedom (especially property rights), and the proper Constitutional authority of the states. The Confederate revolution was, in large part, a classical liberal one, an inconvenient truth for the thesis presented here. Moreover, the villain of the antebellum section of this text, William Lloyd Garrison (criticized for viewing the Constitution as a proslavery document, which Douglass rejected), emerged after the war as the perfect classical liberal in arguing that slaves had freedom, therefore the job was done. But Douglass knew that the slaves had "nothing but freedom," and that freedom was not enough.

Much the same historical distortion appears in the author's arguments about the Civil Rights Act of 1964, especially Title VII of that act. Bean reproduces Barry Goldwater's explanation of his principled libertarian reasons for opposing the act. Goldwater believed, for example, that if you didn't want to serve someone of another color in your restaurant, then you had the right to exclude that person. So did (more famously) Lester Maddox, who stood at the door of his Atlanta restaurant heroically defending his individual rights against the encroachments of government power and "group rights." Moreover, Goldwater's position was further developed and continued by the legion of classical liberal authors in National Review. Like William F. Buckley, by attacking every single civil rights act of that era they stood athwart history and yelled "stop." They drew from the same reasoning as does Pat Buchanan, whose recent diatribe against Sonia Sotomayor and affirmative action and his extolling of the "white man who built this country" simply update arguments extending down from a long line of classical liberal thinkers, including John C. Calhoun, Alexander Stephens, the Southern Dixiecrats, James J. Kilpatrick, William Rusher, and Glenn Beck. In contrast to them, Frederick Douglass' words lie smoldering in his grave.

Left unmentioned here is how and why the Civil Rights Act of 1964 actually worked (to the extent that it did). It only did so because of black and female pioneers who sued in court and demanded that the law be enforced. They knew that "freedom" was necessary but not sufficient; they knew that freedom was not enough. Ultimately, the law worked (and revolutionized American life, for the better in every way) because black and female litigants made it work. And in making it work, they opened up the door for the very figures who, late in this text, resurrect the pure classical liberal tradition (including opposition to "group rights") for our time. Without Title VII, Clarence Thomas would be unimaginable. The same, it should be said, goes for the Voting Rights Act, which produced a revolution in black political participation through the very kinds of government activism which depended on arguments contradicted by the classical liberal position.

The classical liberal tradition always has grappled with its own self-contradictions when dealing with race. Government activism in the service of racism—for example, segregation laws and internment camps—are lambasted here by heroic voices in defense of individual freedom; this is the glory of the story of race and liberty told here. But absolutely necessary government activism in securing greater racial justice (such as the civil rights acts of the Reconstruction era and the 1960s) consistently has been opposed by scores of classical liberals in American history, some anthologized here, most not. That dilemma of the tradition begs for analysis.

All forms of liberalism have their internal tensions and contradictions; that's why "left liberal" authors have led the charge in analyzing the shortcomings of the New Deal in terms of reinforcing segregationist and gender-biased wage structures. In their best historical work, left liberals (who are, it must be said, grotesquely caricatured, even slandered, in this book) have recognized the contradictions and difficulties of government involvement in pursuit of economic and racial justice. This text, too, would have been much stronger had the editor used the opportunity to analyze not only the triumphs but also the difficulties and contradictions of a classical liberal tradition that has at various times been on the side of the angels, and at other times on the side of the demons.