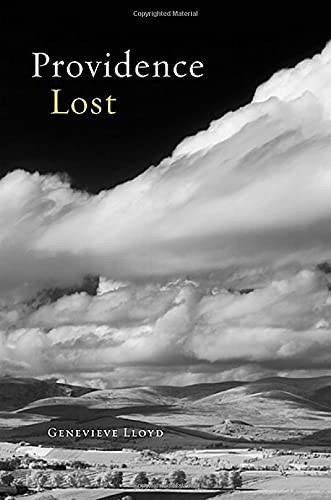 For the Stoics, fate, nature, and providence run together, along the lines of a physics of preordained arrangements. People are free, since atoms can swerve in indeterminable ways, but our freedom is so limited that it is best exercised in calming our emotions. The Stoics are known for advocating an indifference to the ups and downs of life, but that sells their wisdom short. Stoic providence is not just an iron law of necessity. They understood that necessity without purpose or design is indistinguishable from chance. The laws of nature, the Stoics argued, have an ethical force because they are directed toward our most basic needs. It is the job of the philosopher to demonstrate that our needs, not our desires, are in harmony with the restraints of nature. We have to learn to want what the world wants for us.

One Stoic image of providence says it all. A dog tied to a cart can resist being pulled along, if it does not mind being dragged through the dirt. But if it submits, its spontaneous action will coincide with necessity. It can even be happy if it runs fast enough to keep up with the cart! This sounds depressing to our ears—why not chew through the rope and make a run for freedom?—but the Stoics found a satisfying sense of release in the idea that there is more necessity than contingency in the world. Epictetus, one of the greatest Stoics, had been a slave, and he thought freedom and slavery were completely compatible.

It has often been said that Augustine is the first modern man, and this is certainly true when he is compared to the Stoics. For modern tastes, the Stoics are a bit too interested in being calm. Not even the death of a loved one was allowed to upset their emotional equilibrium. Augustine's heart, by contrast, was restless even after he found rest in God. Perhaps because his theological investigations were so unremitting, he tended to think of God as ceaselessly laboring to order the world. What really set Augustine apart from all of the Greek philosophers was his deep confrontation with evil. Of course, Augustine was certain that God is completely in control of the world, but still, his sensitivity to evil lent his doctrine of providence a dynamic character.

For Augustine, God is busy combating evil by making the best of it, but that does not mean that evil is really good (a risk the Stoics took by suggesting that nothing is evil to the wise man who exercises diligent indifference to his fate). The sheer weight Augustine gave evil led him to overhaul the Stoic notion of order. God is able to fulfill the divine plan even though the world goes awry at every step of the way. Central to the divine plan is the role of human freedom. Our freedom makes many events seem contingent to us, but they are still necessary to God, because God exists outside of time and thus knows the future even better than we know the present or the past. Augustine's understanding of freedom is thus much more complex than the Stoic defense of detachment.

Lloyd is alert to how Augustine challenges the way the Stoics take refuge in necessity, but she misses the way providence for Augustine is much more than a tool for categorizing events as either necessary or contingent. Lloyd places Augustine in continuity with the ancient Greek quest to balance the necessary and the contingent. But for Augustine, God orders the world in order to honor our freedom, so that events which are planned can also be genuinely surprising. Our fallen wills want to control what happens to us, but faith permits us to act freely while trusting that God is in control. At the risk of sounding blasphemous, we might say that Niebuhr's famous prayer is thus providentially misleading, and my friend Jim's dilemma is moot. Wisdom comes not in discerning which events are necessary and which are contingent but in recognizing that all events are both, simultaneously.

Because Lloyd does not fully recognize the significance of Augustine's breakthrough on providence, she does not portray him as the hero of her narrative. Nonetheless, she does show how, after Augustine, contingency and necessity fell apart, and the best philosophical minds were not able to put them back together again. Descartes, in his quest for certainty, inadvertently sets humanity down the path of separating mind from matter, pitting our will in an interminable and ultimately futile battle against nature. Spinoza went in the opposite direction, arguing that everything is foreordained. Imagine, Spinoza suggests, that a stone is rolling down a hill, but at some point it becomes conscious of its movement. It will think that it is causing its own motion, when of course nothing of the sort is happening.