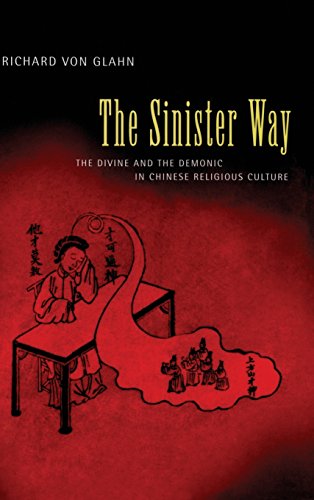 The Sinister Way: The Divine and the Demonic in Chinese Religious Culture
Richard von Glahn
University of California Press, 2004
400 pp., 85.0

The Shrine Next Door

A superb study of Chinese popular religion helps to set the context for the appeal of Christianity in China today.

Have you ever noticed a brightly colored picture of a man in traditional costume, flanked by electric red candles, in your favorite Chinese restaurant, perhaps somewhere near the cash register? Well, that's a shrine to the god of wealth, the patron deity of millions of Chinese business people. By conferring his blessing on the acquisition of riches, this popular god helps to express, and also to drive, the capitalistic impulse that has both enriched and damaged China in recent years.

Despite its foreboding title and evident academic audience, von Glahn's treatment of Chinese religion offers a wealth of information and insight to general readers as well as to students of Chinese culture. To explain the rise and transformation of one prominent cult––that of Wutong, a precursor to the smiling face we see today––the author ranges widely throughout Chinese history. The end product is a general overview of popular Chinese religion from earliest times to the present.

After a succinct and critical review of recent theories of traditional Chinese religion, von Glahn traces the development of Chinese "vernacular" religion from the Shang Dynasty up to the 20th century. Such a survey complements the usual treatments, which neatly separate Confucian, Buddhist, Daoist, and "popular" beliefs and practices.

In particular, von Glahn traces the vicissitudes of what he terms "the sinister way." This menacing phrase refers to the "dark side" of Chinese religion. While some objects of worship, such as the Goddess of Mercy (Guanyin), represent nothing but benignity and kindness, others, such as Wutong, display a propensity for malice.

Centuries ago, Wutong was feared as a demonic deity who would promise fabulous wealth, but only at a price––usually the sexual possession of one's wife or daughter. Fickle and mean, he was prone to withdraw the riches he had once bestowed.

Lacking a firm concept of fixed moral absolutes at the "center" of the universe (after all, they stress the complementary interplay of yin and yang), the Chinese world of divinities is populated with beings who might, for no cause, assail "innocent" folk with calamity. Rituals of all sorts have been designed to gain some sort of control over, or at least protection from, these dangerous beings,

Christians will be struck by the contrast between traditional Chinese religion and the faith of the Bible. For example: rather than a single canon of Scripture, the Chinese possess a vast assortment of texts in an array of genres, all of which purport to represent the truth about the relationship of humans and the gods.

These gods, moreover, do not remain the same "yesterday, today, and forever." Depending upon the place, the time, and the perceived needs of the people and of the government, they can rise or fall in popularity and position. Humans can enter the pantheon, and established deities can be expelled. In one notable case, a masculine god was transformed into the goddess of mercy, Guanyin.

Although the Confucian patrician class and the government, often in concert with Buddhist and Daoist clergy, tried to inculcate faith in a moral order that rewarded good and punished evil, cults like that of Wutong expressed a profound anxiety felt by common people who saw themselves at the mercy of capricious and often malevolent gods––spirits who mirrored the unpredictability and random rule of magistrates and emperors.

To confuse matters further, local traditions modify both faith and practice, so that no one orthodoxy prevails across the Chinese religious scene––again despite official statements to the contrary. The creative and sometimes controlling influence of popular piety on the development of official doctrine and cultus reminds at least this reviewer of the role of the laity in the gradual transformation of the status of Mary in the Roman Catholic Church.

Quite fascinating to me was von Grahn's description of how the demonic Wutong changed into a very different deity, the current god of wealth who has no dark side. Gone is the insight that a lust for riches can poison the heart and pervert the family.

One stark continuity with modern China strikes those who have heard about persecution of house church Christians: government leaders have always feared popular religious movements. Not only because Buddhist– and Daoist–inspired uprisings have on several occasions nearly toppled the throne, but because local religion resists government control.

Chinese rulers have usually tolerated "orthodox" religious groups. They register the clergy, recognize certain authorized shrines and places of worship, and regulate religious practices. Not so with "cults," by which they mean any group outside their control. These they usually try to suppress, almost always by accusing them of a variety of "sinister" and socially disruptive practices, such as healing and exorcism. Hence Chinese communist strictures against house churches, and the justification they offer for brutal treatment of them, are couched in the type of language von Grahn quotes to describe imperial Chinese edicts against the Wutong cult and others like it.