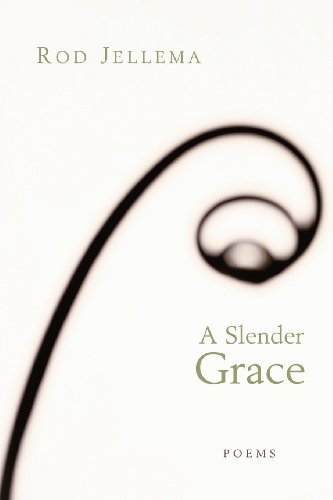 At Home in the Dark

The first new book of poems in almost twenty years from Rod Jellema.

One real danger for Christian writers is to rely upon biblical, or traditional, images without making them earn their power afresh.  For me one of the most appealing aspects of A Slender Grace is the way Rod Jellema questions the cliché;s we casually toss around.  In "Letter to Lewis Smedes about God's Presence" he says, "Don't tell me how God's mercy / is as wide as the ocean, as deep as the sea. / I already believe it, but that infinite prospect / gets farther away the more we mouth it."  Instead, Jellema looks "in cracks and crevices" and finds we're hanging by a "thin and tenuous thread."

Another image he readily inverts is that of darkness and light.  He says, "This is not an age of dark, but of glare," and enlists Isaiah to support him in his meaning.  He also challenges the way we talk about darkness in another poem, "Nightrise from the Observation Deck of the World Trade Center. " He says, "evening doesn't fall, / darkness . . . rises.  From here you can see it / steam off Seventh Avenue", and "it lurks / under bandages, waits / in cracks, down throats."  Similarly, elsewhere, he challenges the phrase "the dead of winter" as "an old deception, a lie / undone by swelling twigs / and pregnant bears asleep."

In his profound prefatory note, Jellema undermines the false idea that poets have a particular "fire that sets them apart" from others.  He says the only real difference is that poets sometimes "take a second look," and that the poems are an invitation to share in what they've discovered.  Since Jellema's poems are quite accessible, they successfully draw the reader into his second look.

A Slender Grace, Rod Jellema's fourth poetry collection, makes its appearance almost twenty years after the publication of his previous book, The Eighth Day: New and Selected Poems.  In several ways this book has been more than twenty years in the making.  Although he sometimes yields to the impulse to produce what Robert Klein Engler has called "the compulsory travel poem," he has also moved well beyond such.  He accomplishes this by leaving his raw images and impressions waiting in the cold cellar of his diary, and then, when he rediscovers the all-but-forgotten store, he transforms it into a rich poetic feast.

This is particularly true of the six poems in "Assignment Nicaragua, 1985."  At that time he was a volunteer with a "Witness for Peace" delegation in Nicaragua.  I believe these poems could not have emerged so gracefully had they been written twenty years ago.  He portrays with dignity the victims of the war, and reluctantly points a finger of judgment at himself and his homeland.  In "Hearing the Nighttime Crowing of Cocks" he says, "we have denied this Jesus, / this hay-soos whose house this is. / But shiny in Contra ammo belts / every U.S. bullet in those hills / denies that we know the man."

The 77-year-old poet also looks back at his youth, and distills from his nostalgia images of beauty and truth.  One good example is "Ice Age," where he retores his childhood memory of the iceman who "flings open his kingdom / to August daylight" and whose pick "splits open ravines and valleys / as he showers meteors skyward."

Jellema pays tribute well to artists of various forms who have inspired him.  In two poems he salutes Bix Beiderbecke, famous for his innovative jazz cornet, although it is his piano compositions that Jellema focuses on.  "Bix Beiderbecke Composing Light, 1927—1931" is about his Modern Suite for piano which has titles that are all about qualities of light.  The poem "In the Dark," which takes its name from the suite's final movement, was commissioned as a piece to be read in performance with piano accompaniment.  Bix and his jazz contemporaries also surface at other points in the book.  Similarly, Vincent Van Gogh is singled out for attention with a series of three poems, and the great gospel bluesman Blind Willie Johnson is celebrated in another poem.

Another way Jellema salutes those who have fed him, is through the use of quotations.  Poets Robert Browning, Edwin Muir, Wallace Stevens, James Wright, William Stafford, and Czeslaw Milosz are all quoted here, as are many other sources of inspiration.  Many of these quotations are jumping off points for the poetry, but they are also Jellema's way of pointing away from himself.  This might also explain why he dedicates so many of his poems to individuals.

Throughout the collection we feel we're beginning to know the poet; he reveals little details about his journey, but also stirs our curiosity.  There are many references to Michigan and Lake Michigan, to growing up there and returning to a summer cottage, and glimpses into a newer life in the Maryland suburbs outside Washington, D.C.  There are also a couple dark references to the death of his son, which are not elaborated upon.

The concept of home, and being at home is featured in the final section of A Slender Grace.  It's the subject of the quotations, and the concluding focus of the travel pieces.  It's a reality and an illusion, a longing for the past, and a longing for what will be.  Jellema helps us to take a second look, encouraging us towards understanding—here in the dark.

D.S. Martin is a Canadian poet and music critic. His poems have appeared in many journals such as Canadian Literature, Christianity & Literature, First Things, and Mars Hill Review.  (ds_martin@yahoo.com)