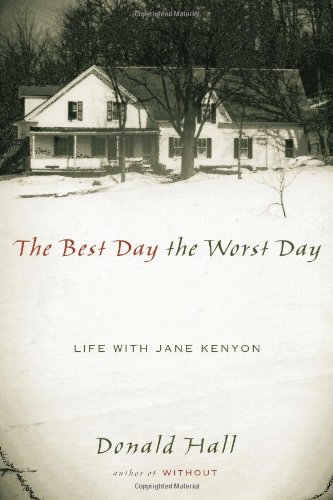 Exploring the valley of the shadow in two literary lives.

My husband ran into the room as I burst into tears. "What is it? Who's dead?"

"Jane Kenyon," I said, clutching A Hundred White Daffodils and wiping my eyes. Only after falling in love with Kenyon's writing—and wondering where I could hear her read her poems—had I turned to the author bio on the jacket flap.

In her poem "Otherwise," Kenyon wrote: "I got out of bed / on two strong legs. / It might have been otherwise. / I ate / cereal, sweet / milk, ripe, flawless / peach. It might / have been otherwise." She concludes the poem, "But one day, I know, / it will be otherwise." Although penned about her husband Donald Hall's battle with cancer, "Otherwise" turned out to be a foreshadowing of Kenyon's own untimely death from leukemia in 1995 at age forty–seven.

Hall knows intimately language of lament, and the truth that grieving is a lifelong process. He published two books of poems after Jane's death: Without (1998), mostly written during her failed bone marrow transplant and the excruciating dozen weeks that followed, and The Painted Bed (2003), which contains many of the same themes. In The Best Day the Worst Day, Hall turns to prose to chronicle their life together. Chapters about Jane's illness and death alternate with chapters of memoir, detailing Hall and Kenyon's early days (he a fortyish, newly divorced professor at University of Michigan in Ann Arbor, she a student in her early twenties), their marriage of more than two decades, and their writing life in New Hampshire.

Readers of Without and The Painted Bed will feel a sense of dé;jà; vu in the essays from The Best Day the Worst Day. Many of his earlier poems are building blocks for his chapters here, including lines almost verbatim ("It was as if she capped Chernobyl with her body"). If poetry is the distilled essence of something experienced or seen, so the sharp, savage grief Hall expresses in his poems is slightly diluted when spread out into essays. That said, without the alternating memoir chapters, The Best Day the Worst Day would be almost unbearable. (Kirkus Reviews used the word "excruciating," rightfully so.)

The flat recital of the progression of Kenyon's cancer will cause even the most hardened reader to flinch. ("Cytoxan drove her into extremes of nausea, stomach pain, and fatigue. Mouth pain began, as Cytoxan killed the quick–growing cells of her mouth and digestive tract. The fuzz on her skull fell out and her whole body was hairless again.") The well–known marriage vow, "for better or for worse," comes to mind as chemo takes away the curly chestnut hair and leaves Jane bald, doctors puncture her chest to allow for a port for medications, incontinency and delirium set in. Excruciating stuff indeed.

While she battles leukemia, other losses tally up. Hall's mother has recently died, and Kenyon's mother Polly succumbs to cancer while Jane is undergoing treatment a continent away. Hall is unafraid to narrate the full range of his emotions, familiar to many caregivers. At one point, overwhelmed with sorrow, weariness, and grief, Hall writes of how he fleetingly considered throwing himself in front of a bus while crossing the street. During another point in her illness, Jane irrationally berates him ("I wish that for one minute you could feel what I feel") and Hall has a nightmare in which he waits at the bottom of a staircase to strangle her. The sheer rawness and vulnerability alternately attracts and repels (as does Hall's penchant for sharing perhaps more about the couple's sex life than some readers will want to know).

Hall develops an intense sense of attention to his wife, attuned to her every facial expression, in which he can gauge the level of her pain, "a dreary acquired expertise." Yet during her brief time of remission and the promise of a return to their old life together, Hall admits feeling "a lurch of shame that I would miss taking care of her—miss being requisite, miss her dependency."

Throughout her battle with cancer, Hall (who Jane calls "Perkins") makes his own connections with mortality. In a moving section, also connected to an earlier poem, the weary Hall turns to the task of cleaning out his childhood home after his mother's death. He is stunned at the vast amount of knick–knacks and objects and souvenirs—of value to his mother but to no one else. He sweeps them into trash bags, destined for the dump. Returning to his home and Jane's at Eagle Pond Farm in New Hampshire, he sees their life in a new light: "I could not keep from staring at our things, objects that we had given each other: Staffordshire dogs and cricketers, wood engravings, a terra–cotta Etruscan woman."