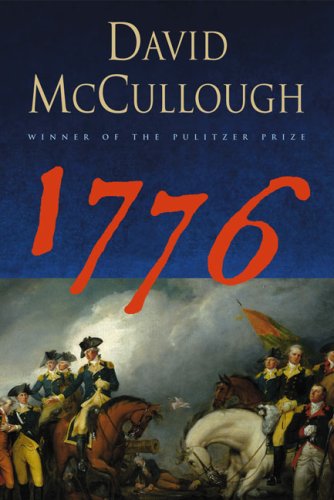 With God on Our Side

David McCullough's account of the pivotal year 1776 has resonance for Americans in 2005.

After a reading of the new Declaration of Independence in Boston in 1776, David McCullough writes, "a great mob of cheering, shouting soldiers and townspeople … pulled down the gilded lead statue of George III." One can't help but recall a later war when, deeming themselves independent, a mob, along with U.S. army tanks, pulled down another statue. In the former case, the figure's head was chopped off and posted as a trophy, and the remaining metal was forged into bullets. In the latter case, the deposed dictator's head was whacked with shoes and otherwise disgraced, at least until the cameras broke away for commercials. So some things change, and some don't.

Among the things that stay the same are the qualities that make two–time Pulitzer Prize–winner David McCullough a popular author. For one thing, McCullough is a good writer—a model of clarity and organization, and especially skilled (I noticed) with commas. The only sentences in 1776 that might require re–reading contain quotes from the 18th century.

McCullough also keeps things simple. Few of his paragraphs are longer than three sentences, and readers will search this book's pages in vain for interpretive or historiographical complexity. Meanwhile, nuances of psychology and character are disposed of with pithy summaries: "John Wilkes … homeliest man in Parliament"; "George Johnstone, a dashing figure"; "Lord North … moderate, urbane, and intelligent." On the battlefield, vim and vigor are strictly an American affair. The story pretty much comes down to American pluck and derring–do in the face of the rather mechanical British and Hessians, whose personalities were squelched in the course of over–training.

The book begins with an American victory (taking Boston), leads us through a decisive defeat (losing New York) and ends, of course, with another American victory (Trenton). The rousing sound of timpani always fills the background, accompanied occasionally by French horn, pretty much in the fashion of a PBS narrative. At random I plopped the book open to page 291 and lighted upon this wonderfully representative passage: "From the last week of August to the last week of December," McCullough writes,

the year 1776 had been as dark a time as those devoted to the American cause had ever known—indeed, as dark a time as any in the history of the country. And suddenly, miraculously, it seemed, that had changed because of a small band of determined men and their leader.

Either you like this kind of history or you don't. Of course, it's possible to enjoy a well–told, well–documented tale while yet recognizing that it's couched in fluff. Even leisured academics, one hopes, can see that if books like McCullough's pull people away from the tube, then a good thing is happening.

And though 1776 doesn't intend to be a great thought–provoker, it raised some interesting questions in my mind. For example, why, in that most patriotic of years, was the new U.S. government compelled to lure recruits with promises of bounties, clothing, and land? Why wasn't love of country enough? And if—the leap to the present is irresistible—America is now (still, as always) God's conduit of democracy to the world (as the president suggests), then why are recruitment figures plummeting for all but the Marines? Does God (speaking through the president) prefer the draft or a more attractive GI Bill?

Or when, in 1776, combatants unnecessarily beheaded their vanquished foes, would they have—if they could have—posted the spectacle online for the benefit of talk–show hosts?

And when, in that year, colonists claimed that "Providence favored us," did they really believe that God was with their cause? Or was much of the supposedly theological public language on display in 1776 really just politics expressed in ancient terms—useful in discussions of civics, worthless as Christian thought?

In the war–year 1776, as in the war–year 2005, Americans were divided. Some opposed the war, some fervently supported the war, and many were ambivalent. Perhaps this latter group made a distinction between supporting the war and supporting the troops. Perhaps they thought to themselves that the war had no end in sight and had come to conclude that it wasn't necessary after all, but now that the country was in it, it had better be fought well.

At the end of 1776, McCullough quotes General Nathanael Green predicting Washington's future as the "deliverer of his own country." Nine generations later, perhaps because the United States is a more cynical place, perhaps because less is at stake, perhaps because heroes have become embarrassing, perhaps because good feelings don't get high ratings to lure marketers, no one says that leaders will deliver the nation. For that matter, what exactly does "national deliverance" mean in a country founded upon the individual's right to life, liberty, and the pursuit of happiness? McCullough doesn't say, but the story he tells leaves us wondering.