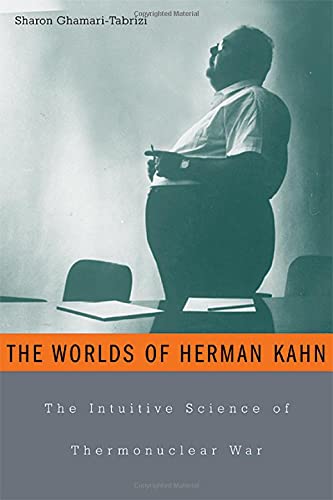 How to Think the Unthinkable

The lessons of Herman Kahn.
August 2005

While conscientious civilians kept an eye out for suspicious aircraft, Herman Kahn went swimming. A corporation sympathetic to Kahn's concern for civil defense had offered a fallout shelter, free of charge, to the Kahn family. Unfortunately, the shelter's entrance tube could not accommodate Kahn's prodigious frame, and so he had a swimming pool installed instead. He swam in it nearly every day.

Meanwhile, citizens of Yale, South Dakota, were gazing at the sky. Upon spotting a plane overhead, they'd sprint to the post office, each eager to be the first to describe the shape of the aircraft. These civic-minded Dakotans were members of the Ground Observer Corps, inaugurated in 1950 by the Continental Air Command. Joining them across the United States were lumbermen, fishermen, merchant marines, taxicab drivers, and inmates at Folsom, Attica, and Statesville.

These two images capture Sharon Ghamari-Tabrizi's ambivalence toward the subject of her book The Worlds of Herman Kahn: The Intuitive Science of Thermonuclear War. Famous in his heyday, in the late 1950s and the 1960s, reduced to a caricature by those for whom Dr. Strangelove remains the last word on nuclear strategy, Kahn (1922-1983) has long aroused simplistic responses. Ghamari-Tabrizi is more ambivalent, more nuanced, seeing him in turn as a court jester and a visionary.

The case for the former is strong. Ghamari-Tabrizi dwells on Kahn's propensity for nuclear holocaust humor, quoting such gems as: "It is possible, isn't it, that parents will learn to love two-headed children twice as much?" Kahn's appearance alone was preposterous. Comically corpulent, balding, bespectacled, wheezing, and stumbling over words, he resembled—Frances FitzGerald wrote—"his adopted Los Angeles, that giant amoeboid city which seems to have no natural boundaries, no structural limits."

Yet the threat that engendered the Ground Observer Corps was real, and Kahn's book On Thermonuclear War, published in 1960 under the auspices of the Center for International Studies at Princeton, was "the first widely circulated study that dramatized how a nuclear war might begin, be fought, and survived." What would such a conflict actually look like? How many would die under various scenarios? What would be the most pressing challenges for the survivors? How should resources prepared in anticipation of such an event be prioritized? Kahn's responses could be at once cogent and troubling: he proposed that irradiated food be graded A-E, with Grade A, available only to pregnant women and children, containing the least strontium. Grade D would be available to those over forty; Grade E fodder for animals. Kahn advocated the distribution of personal radiation meters, because, as he said, "if one man vomits, everybody vomits," and even those not stricken with radiation sickness would believe themselves ill. Kahn had no time for those who believed that such considerations were pointless in the face of the ultimate horror. Against the paralysis of thought, he maintained his conviction that human beings will persist amid tremendous adversity, and perhaps even thrive.

By asking and trying to answer such questions, often in excruciating detail—by seriously thinking about the lived reality of nuclear war and not just its geopolitical dimension—Kahn earned the respect of philosopher and passionate disarmament advocate Bertrand Russell. At RAND and later at the Hudson Institute, Kahn was part of what Ghamari-Tabrizi calls "the cold-war avant-garde," men who advocated the burgeoning science of systems analysis rather than relying principally on conventional approaches to military strategy. Since, as Kahn mordantly observed, there was "a dearth of people with relevant practical experience in the conduct of thermonuclear wars," practical experience had to take a back seat to theory. In 1968, Kahn described his approach, and its major liability, with a characteristic blend of chutzpah and self-deprecating wit: "We take God's view. The president's view. Big. Aerial. Global. Galactic. Ethereal. Spatial. Overall. Megalomania is the standard occupational hazard."

The Worlds of Herman Kahn does not evaluate the validity of Kahn's stratagems. Instead, Ghamari-Tabrizi tells us "we can more sensitively explore the cold war by referring to a shape of feeling. If we foreground the cognitive and emotional palette of these years rather than its pathology, we can enter vitally into its world." Ghamari-Tabrizi succeeds admirably in this reconstruction; the book is peppered with amusing, startling, and unsettling artifacts of Kahn's world.

Sixty years after the United States dropped the bomb on Hiroshima, it is hard for us to recapture the impact of that event. Perhaps Ghamari-Tabrizi indulges in poetic license when she describes the post-World War II mood as "uncanny" and "fantastic," but her hyperbole nevertheless helps to catch something often missed in characterizations of the 1950s. And she's persuasive when she places within that frame Kahn's enthusiasm for simulation, abstraction, and the limitless possibilities of the mind. Kahn's pioneering war games, she writes, "seemed to draw from an anecdotal sensibility in which a jumble of details, revealed in episodic moves, in an atmosphere of uncertainty and incomplete information, evoked a sense of reality." In their war-gaming, Kahn and his cohorts cared less about outcome than about process, a process characterized by Ghamari-Tabrizi as "a spur to group creativity, a training of intuition, the creation of a parallel world." She's both attracted and repelled by this ethos, perhaps because it ties her understandable dread of nuclear annihilation to the heady rush of unbounded thought.

In her introduction, Ghamari-Tabrizi quotes Donald Rumsfeld's now-infamous statement about Saddam Hussein's purported weapons of mass destruction and their possible conveyance to Al Qaeda: "There are things we know we know. There are known unknowns, things we know we don't know. But there are also unknown unknowns." Ghamari-Tabrizi points out that Rumsfeld's cryptic threat assessment evoked, and was to some extent rooted in, Kahn's thinking about the unthinkable.

The affinity between Rumsfeld and Kahn is not surprising. Like the specter of nuclear holocaust at the peak of the Cold War, the threat of 9/11-inspired terrorism demands a willingness to contemplate contingencies that most of us instinctively shrink from. At the end of her introduction, Ghamari-Tabrizi suggests that "for President Bush, as for all of us, the matter ultimately turns on faith," the matter being the waging of war in the nuclear era. For her part, Ghamari-Tabrizi does not trust "the sciences underwriting war." Near the end of the book, she quotes disarmament activist H. Stuart Hughes reflecting on the dilemma of faith: "the best any man can do is make his choice in the agony of conscience … convinced that whatever he does will be in some sense wrong, that, like Pascal, he is making a desperate wager in the dark." In The Worlds of Herman Kahn, Ghamari-Tabrizi portrays a man who made that bet against seemingly impossible odds, and, probably laughing along the way, went for a swim.

The Worlds of Herman Kahn: The Intuitive Science of Thermonuclear War is available from Amazon.com and other book retailers.