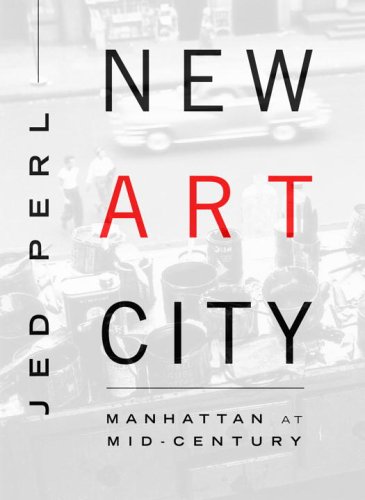 A geography of art in New York at the midpoint of the 20th century.

Although Perl is not intent on writing a history, he does produce a narrative that is intended to counter views which, to his mind, have exaggerated the influence of certain artists at mid-century. Working within a broadly neo-conservative context, Perl is deeply skeptical of the influence that the Dadaist Marcel Duchamp, living in New York, exerted on the mid-century art world. He writes off the work of Robert Rauschenberg, Jasper Johns, Andy Warhol, and other "Pop" and "Neo-Dada" artists as merely "riffing" on Duchamp. Perl's assessment, echoed by the conservative and neo-conservative critics of the New Criterion circle, is not particularly original, nor is it particularly useful, except as a means to demonstrate a historical pedigree for the tripe they see masquerading as authentic contemporary art. For example, Perl's widely quoted screed against the painter John Currin is given historical legitimacy by his dismissal of Duchamp-Rauschenberg-Warhol.

But Perl's book is more than an attack on the influence of Duchamp. His interpretations of Joseph Cornell and Fairfield Porter are brilliant and insightful. In fact, his assessment of their work is well worth the price of this massive book. He brings all his themes to bear on their art and their lives. Indeed, it is in his wonderful interpretations of these two artists—figures far less characteristically "mid-century" than Jackson Pollock, Willem de Kooning, and Clement Greenberg—that Perl's exceptional gifts as an art critic are most impressively on display.

Perl is entitled to his biases and his opinions, for criticism, if it is anything, should be, as Baudelaire insisted, "passionate, partisan, and political." The problem is that many Christian art writers whose criticism is grounded in worldview analysis find confirmation in Perl, Hilton Kramer, Roger Kimball, et al. that the contemporary art world is what they fear it is: a joke. I don't advocate not reading Perl and Kramer and Kimball and others of their school—on the contrary—but too many Christian commentators stop with them, take them as the "authoritative voices" in the contemporary art world. That these and other neo-con critics often regard themselves to be the defenders of the "Judeo-Christian" tradition merely confuses the issues. Although I vehemently disagree with his conclusions on this score, Perl's response to the Duchamp-Rauschenberg-Warhol aesthetic was shaped through his laborious engagement with their art. This cannot be said for most Christian commentators.

Rosenberg ended his essay on Tenth Street by predicting its future: "It will be swallowed in the yawn of a steam shovel. Its future is—an excavation." Interestingly, one of de Kooning's masterpieces, hanging in the Art Institute of Chicago, is entitled Excavation (1952). And we are back to the metaphors of geography. Perl's charming book is not a social history, it is a spatial history, a history of a period shaped by the aesthetics and poetics of New York City. I anticipate that some of the "wealth of nations" that will be on those ships from Tarshish to the New Jerusalem that the prophet Isaiah speaks of will have been produced at mid-century on Tenth Street.

Daniel A. Siedell is Curator of the Sheldon Memorial Art Gallery at the University of Nebraska-Lincoln and a frequent contributor to Books & Culture. He is the editor of Weldon Kees and the Arts at Mid-century (Univ. of Nebraska Press) and is currently at work on An Excavation of Tenth Street: Essays in the Historiography of the New York School.

The Los Angeles Times profiled Perl and discussed his book.

Other reviews of New Art City have appeared in The New Yorker, The Christian Science Monitor, The New York Sun, Newsday.

Knopf has more information about the book.

How Wide the Divide? | A proposal for compromise between "value evangelicals" and "legal secularists" on church-state issues. (Sept. 13, 2005)