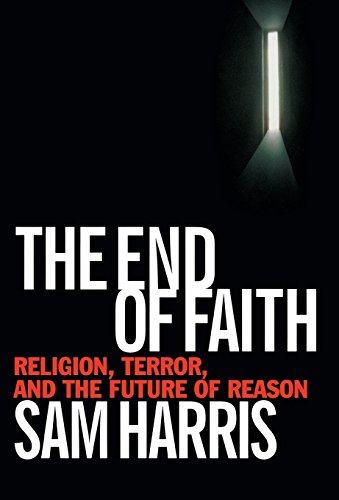 Religion is really, really bad for you.

Briefly put, his view goes like this: 1) religious people are less rational than other people, 2) they are less rational because they are religious, and 3) this lack of rationality makes them dangerous. For myself, I can think of no reason to believe even one of these statements, and Harris doesn't offer much in the way of evidence except a few quotations by selected, dim people of faith. I suppose the first could be answered empirically, but he doesn't try. The second seems difficult to test. And the third is dubious in the extreme. To take an obvious example, two of the smartest people in Germany during Hitler's rise to power were the philosophers Martin Heidegger and Carl Schmitt, both of whom eagerly accepted Nazi patronage. I'll put my moral stock with the supposedly irrational Jews and Christians who worked against National Socialism

This last example, of course, draws attention to the pink elephant standing in the corner of Harris' room. If beliefs do in fact cause people to be violent, the beliefs that have killed more people than any other are Nazism and Communism, one of which was non-religious and the other explicitly atheistic. Harris' solution, as the reader may be able to guess, is to claim that National Socialism and Communism were in fact religions. But here the argument goes completely off the rails. Harris tries to prove that religion is the source of violence in the world by defining religion as any set of beliefs that causes people to be violent. This is an equivocation, followed by a tautology, masquerading as a demonstration.

The final premise of Harris' argument for the abolition of religion is that the prevention of violence is an overriding ethical imperative. While I myself find this quite agreeable, it gets him into a logical black hole from which no force can extract him. After all, people who do kill for religious reasons disagree with Harris about what is of ultimate ethical importance. They think that something else takes precedence over the prevention of physical harm: perhaps justice, or piety, or righteousness, or the enforcement of divine law is the overriding imperative, and these ends justify violent means. The question, then, is how does Harris defend his moral vision above theirs? The answer is that he doesn't.

He simply asserts that "questions of right and wrong are really questions about the happiness and suffering of sentient creatures." Says who? Professional ethicists will be surprised to hear the news, given that most of them disagree with the kind of utilitarianism implied in this statement, as do most of the great figures in the history of moral philosophy. When it comes, therefore, to justifying the core of his moral worldview and the foundation of his argument against religion, Harris has nothing to say. He maintains an ethical dogmatism that is as free from argument as the convictions of a radical fundamentalist.

So much for the triumph of reason. Harris writes with pith and energy, but his style is put in the service of terrible arguments. He is still a young man, however, so perhaps someday his logic will catch up with his rhetoric. Let us pray.

Matthew Simpson teaches philosophy at Luther College in Decorah, Iowa. His book Rousseau's Theory of Freedom is forthcoming from Continuum.

The End of Faith: Religion, Terror, and the Future of Reason is available from Amazon.com and other book retailers.

The author's website has excerpts, biographical information, and a ridiculous cartoon about how teaching creation in schools will lead to bad doctors.

This Land Is Whose Land? | An impassioned plea on behalf of the "caribou people" in the Arctic National Wildlife Refuge and the land they have inhabited for nearly 20,000 years. (March 22, 2005)