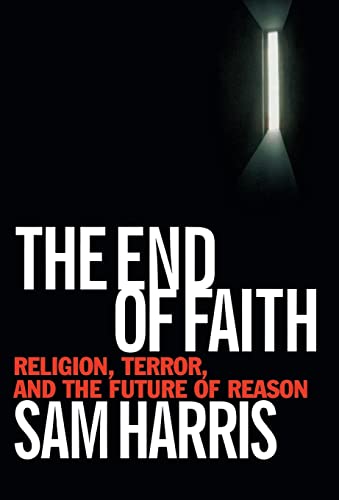 Religion is really, really bad for you.
April 2005

The terrorist attacks in September 2001 reawakened among American intellectuals the theory that religious faith makes people violent. This hypothesis goes back to antiquity; the Roman philosopher Lucretius, commenting on the horrors of the Trojan war, remarked tantum religio potuit suadere malorum, "such evil deeds can religion prompt." This view obviously draws its strength from the number of believers who have killed other people (and themselves) supposedly in the name of God. Perhaps someday social psychology will shed more light on the relationship between religion and violence. Perhaps. But Sam Harris doesn't want to wait that long. To him it is obvious that religion causes people to kill, and he wants it to go away.

The thesis of this widely noticed book is that in order to save ourselves from imminent destruction we should take all steps possible to abolish religion: "Words like 'God' and 'Allah' must go the way of 'Apollo' and 'Baal', or they will unmake our world." Two points for boldness, if nothing else.

Harris' argument for the abolition of religion goes like this: people act based on what they believe, and religious beliefs are especially apt to make people act violently; thus, since the prevention of violence is the overriding ethical imperative, religion should be done away with. The problem is that none of his premises are very plausible on the surface, and what he says in their favor makes them even less so.

First, Harris' argument relies on the idea that people's actions are determined by what they believe about the world around them. "A belief is a lever that, once pulled, moves almost everything else in a person's life. … Your beliefs determine your vision of the world; they dictate your behavior." To some degree this is true. I don't put my hand in the candle flame because I believe it will burn me. But for centuries psychologists have questioned whether beliefs alone can actually motivate actions. Passions seem to be required too, and Harris has little to say about them.

After all, it is not only my belief that the candle will burn that motivates me, it is also my desire not to get burned. A belief unaccompanied by a desire seems unable to cause any action. Even if Harris is right that violent people tend to have beliefs (religious or otherwise) that condone violence, are they violent because they have those beliefs, or do they have those beliefs because their passions dispose them toward violence? His argument relies on the former, but it seems an impossibly naïve account of human psychology.

Harris' second premise, that religious beliefs are especially apt to make people violent, is even less promising. Here at least he realizes that he needs to do some arguing. For, if people do act based on what they believe, how can he possibly say that belief in the Sermon on the Mount, for example, or in the teachings of the Buddha, is likely to cause the believer to harm other people? Indeed, if the psychological determinism that underlies Harris' first premise is true, then the spread of religions that advocate nonviolence would be a good thing for world peace.

Faced with this obvious contradiction, Harris performs a rhetorical two-step. His first move is to claim that lurking in the heart of even the most pacifistic religion is the seed of hatred and violence: "Intolerance is thus intrinsic to every creed. … Certainty about the next life is simply incompatible with tolerance in this one." To see the obtuseness of this view one may turn, for example, to John Locke's Letter Concerning Toleration of 1689. Locke uses religious arguments (in his case Christian ones) for the view that individuals and governments should leave each other alone in matters of faith. In other words, Locke not only advocated religious toleration, he advocated it for religious reasons, as did William Penn and Roger Williams, and as many other people have in the centuries since then.

Harris demonstrates a similar crudeness in his discussion of religious moderates. Given the fact, uncomfortable for him, that most believers are not murderous, he needs a reason to explain why all religion is bad, not just certain kinds of violent extremism. His answer is that moderates make life too easy for religious zealots. "The problem that religious moderation poses for all of us is that it does not permit anything very critical to be said about religious literalism." This is nonsense. One need only think of Erasmus, a priest and Augustinian monk, who spent his life using religious arguments to make the case against religious fanaticism, to see that religious moderates can have a great many critical things to say about extremism.

In short, this line of argument purporting to show that religious belief is inherently violent is going nowhere. So, intentionally or not, Harris slides into a second position. He now says that religions are dangerous not so much because of what religious people believe, but because of how they believe it. Religious faith is dangerous, he says, because it doesn't conform to the standards of scientific rationality, and it therefore encourages credulity and stupidity. He finds this deeply irritating. "Religious faith represents so uncompromising a misuse of the power of our minds that it forms a kind of perverse, cultural singularity—a vanishing point beyond which rational discourse proves impossible." Religion is "the venom of unreason" loose in the world, and unreason, he believes, is a dangerous thing.

Briefly put, his view goes like this: 1) religious people are less rational than other people, 2) they are less rational because they are religious, and 3) this lack of rationality makes them dangerous. For myself, I can think of no reason to believe even one of these statements, and Harris doesn't offer much in the way of evidence except a few quotations by selected, dim people of faith. I suppose the first could be answered empirically, but he doesn't try. The second seems difficult to test. And the third is dubious in the extreme. To take an obvious example, two of the smartest people in Germany during Hitler's rise to power were the philosophers Martin Heidegger and Carl Schmitt, both of whom eagerly accepted Nazi patronage. I'll put my moral stock with the supposedly irrational Jews and Christians who worked against National Socialism

This last example, of course, draws attention to the pink elephant standing in the corner of Harris' room. If beliefs do in fact cause people to be violent, the beliefs that have killed more people than any other are Nazism and Communism, one of which was non-religious and the other explicitly atheistic. Harris' solution, as the reader may be able to guess, is to claim that National Socialism and Communism were in fact religions. But here the argument goes completely off the rails. Harris tries to prove that religion is the source of violence in the world by defining religion as any set of beliefs that causes people to be violent. This is an equivocation, followed by a tautology, masquerading as a demonstration.

The final premise of Harris' argument for the abolition of religion is that the prevention of violence is an overriding ethical imperative. While I myself find this quite agreeable, it gets him into a logical black hole from which no force can extract him. After all, people who do kill for religious reasons disagree with Harris about what is of ultimate ethical importance. They think that something else takes precedence over the prevention of physical harm: perhaps justice, or piety, or righteousness, or the enforcement of divine law is the overriding imperative, and these ends justify violent means. The question, then, is how does Harris defend his moral vision above theirs? The answer is that he doesn't.

He simply asserts that "questions of right and wrong are really questions about the happiness and suffering of sentient creatures." Says who? Professional ethicists will be surprised to hear the news, given that most of them disagree with the kind of utilitarianism implied in this statement, as do most of the great figures in the history of moral philosophy. When it comes, therefore, to justifying the core of his moral worldview and the foundation of his argument against religion, Harris has nothing to say. He maintains an ethical dogmatism that is as free from argument as the convictions of a radical fundamentalist.

So much for the triumph of reason. Harris writes with pith and energy, but his style is put in the service of terrible arguments. He is still a young man, however, so perhaps someday his logic will catch up with his rhetoric. Let us pray.

Matthew Simpson teaches philosophy at Luther College in Decorah, Iowa. His book Rousseau's Theory of Freedom is forthcoming from Continuum.

The End of Faith: Religion, Terror, and the Future of Reason is available from Amazon.com and other book retailers.

The author's website has excerpts, biographical information, and a ridiculous cartoon about how teaching creation in schools will lead to bad doctors.

This Land Is Whose Land? | An impassioned plea on behalf of the "caribou people" in the Arctic National Wildlife Refuge and the land they have inhabited for nearly 20,000 years. (March 22, 2005)

All in Her Head | How a chronic pain sufferer found a little bit of strength in a lot of weakness. (March 15, 2005)

My Likeness, My Brother | A powerful autobiographical work from a prizewinning creator of comics in France. (March 08, 2005)

Booking Ahead | The conclusion of our seasonal roundup—and, at last, truly, this time we mean it, The Worst Book of the Year (Jan. 18, 2005)

Modern, All Too Modern | Tom Wolfe's new novel, largely reviewed as a satiric report on the sexual mores of today's college students, is fundamentally about the nature of the human will. (Dec. 14, 2004)