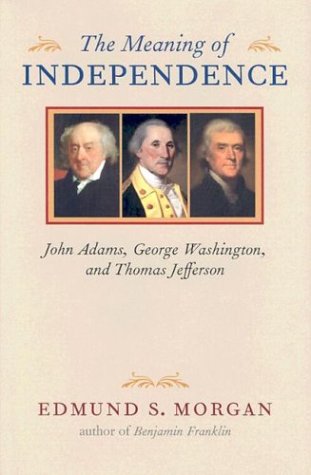 All the Founding Fathers of America celebrated "independence," but what the word meant depended on who was speaking.

"The very existence of a continental congress was exciting [to John Adams]," writes Edmund S. Morgan, emeritus professor at Yale, "and participation in it constantly expanded his ambitions for America—and for himself." The seeming afterthought about Adams' self–preoccupation is in fact central to this small book's project, namely, the influence on the early United States of the personalities and private motives of Adams, George Washington, and Thomas Jefferson. Thus, the three chapters that make up this useful and enduring work (it's a timely reprint of the original, which appeared in 1976), are partly character sketches and partly reflections on how those characters shaped the early United States. The meaning of American independence to John Adams was the country's freedom to pursue its own interests; and "the achievement and preservation of American independence became inseparable from [Adams'] own ambition."

For George Washington, independence meant the freedom to promote a national aloofness from international affairs akin to his own personal aloofness, even from friends. And for Thomas Jefferson—that disturbingly and marvelously diverse and undulating man—independence meant the opportunity to enhance and expand personal freedom. Enough of priests fed by the taxpayers and of tradition for its own sake, Jefferson thought. Let every generation serve its own interests. The dead are dead. Or, as Morgan puts it, Jefferson "liked to think of generations as nations, and he sought the independence not merely of Americans from England but of every generation of Americans from the proceeding one."

This wonderfully Yankee idea is both attractive and delusional. Liberation from the past is as impossible as liberation from one's genes and one's upbringing—and the upbringing of one's parents. And even this country, which at times has seemed to make a pastime of historical ignorance, now finds itself speaking in reverent tones of a Greatest Generation. Christians, anyway, tend to their lives precisely because every generation of believers is linked to the previous one, which is watching (Heb. 12:1).

But whether prominent leaders' ideas are good or not, no one can deny that personality shapes history. One doubts that George W. Bush would have pulled out of Somalia soon after the deaths of 18 American troops there, as Clinton did in 1993. One doubts that Al Gore would have launched an invasion of Iraq. One doubts Clinton would have exuded the strength Bush did in the days after 9/11. One doubts the Soviet Union would have imploded as quickly as it did, when it did, had Jimmy Carter stayed in the White House. World War II is unimaginable absent the personalities of Mussolini, Hitler, Stalin, Roosevelt, and Churchill.

So too, the American Revolution and its successful, if shaky, aftermath is unthinkable without the personalities of Washington, Adams, and Jefferson, along with Hamilton, Madison, and others. Washington's sense of propriety and honor was offended by a British policy that no colonial soldier could ever outrank an officer from the Mother Country, and that surely has something to do with his efforts on behalf of independence. Morgan tells us that Washington's desire following the Revolution to retire to private life was overcome by the feeling that the new country could dishonor itself—and his legacy—by coming unglued. This meant his acceptance of the presidency. It also meant promoting the building of canals in the west to bind westerners to the east rather than risk seeing them gravitate toward Spain or Britain, which still held substantial turf in Louisiana Territory and Canada.

Washington's need for honor precluded the possibility of him being called "Farmer George," Morgan jokes; but neither was Washington so pompous as to accept John Adams' opinion that the president should be cloaked in the vocabulary of monarchy. "Your Highness" would not do.

Thus Washington manages to be both nicely American and aristocratically elusive. The battlefield mud on his shoes and the sweat of stress on his brow make him no less respectable. "Americans honor the father of their country from a respectful distance," Morgan says. "And that is surely the way Washington would have wanted it."

Out of the blocks, Morgan stumbles, seemingly forgetting that words have meanings. One doesn't know what to do with sentences like "John Adams was one of the vainest men who ever lived" or claims that Adams had an "almost psychopathic yearning to be thought a great man by everybody." Psychopathic? Everybody? One might have thought that editors would go after these musings, scissors in hand.

Fortunately, this sort of thing vanishes after the first ten pages, when the reader can settle in for a short but satisfying excursion through the revolutionary period and the first years of the republic.