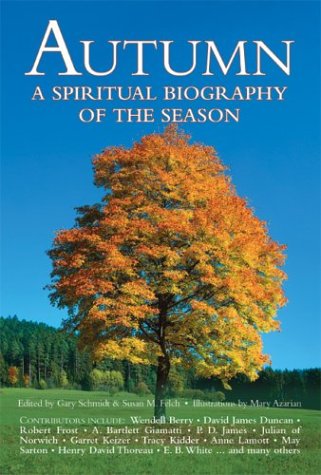 Autumn: A Spiritual Biography of the Season

A richly varied anthology offers a "spiritual biography" of autumn.

Sometimes it seems there is no limit to scientific reductionism—the shrink–wrapping of creation's mysteries in scientific facts. Nothing is exempt, not even the bewildering brilliance of the autumn leaves. The changing leaves can't just be God's gorgeous decorations; they have to have a logical and practical purpose, a cause and effect. William Hamilton's so–called "leaf signal hypothesis" holds that leaves brighten in order to deter parasites. Now, as science–writer and blogger Carl Zimmer reports, a new hypothesis has emerged: the colors of the leaves are trees' way of storing up nutrients for the winter. The blazing pigments shield the leaves from the sun's ultraviolet rays as they kick photosynthesis into high gear, using the extra energy to return their nitrogen, phosphorus, and other vitamins back to the tree before they fall away and die.

These theories are interesting, and surely worthy of serious scientific study. Beauty and bug repellent may indeed go hand–in–hand. But our disappointment at the sterile rationality of these theories is analogous to Walt Whitman's in his poem "When I Heard The Learned Astronomer." When he listens to an astronomy lecture and "the proofs, the figures, were ranged in columns before me," Whitman discovers he'd rather be standing outside, gazing in awe at the stars. Doubly troublesome, though, is the pragmatic attempt to reduce the beauty and intricacy of nature to mere evolutionary function. Through the leaf signal hypothesis, wrote the London Guardian, the changing colors of the leaves are "given a meaning by evolution" (emphasis added). Their aesthetic delight as a clue to their purpose—being brushstrokes of a master artist—is rendered irrelevant.

For a more fulfilling encounter with fall's folial show, treat yourself to Autumn: A Spiritual Biography of the Season. Sample this survey of some of the best poetry, memoir, and landscape writing that has emerged from the season, including Thoreau's essay "Autumnal Tints." "October is the month for painted leaves," he wrote. "As fruits and leaves and the day itself acquire a bright tint just before they fall, so the year nears its setting. October is its sunset sky; November the later twilight."

Susan Fenimore Cooper sees a landscape that "shows its wooded heights dyed with the glory of October, its lawns and meadows decked with colored groves, its broad and limpid waters reflecting the same bright hues." Zoologist Allen Young says the changing of the leaves is "when autumn begins to show its personality," as "its cooling brush repaints the canvas of foliage from greens to bright colors," in "summer's ebullient finale."

Equally evocative, though, are the collection's accounts of the void left by the cascading leaves as October turns to November, and rigor mortis sets in among the dull brown trees before they are whitewashed by winter. In "My November Guest," Robert Frost beholds "The desolate, deserted trees / The faded earth, the heavy sky," and says he has learned "The love of bare November days / Before the coming of the snow." Donald Culross Peattie compares this decrescendo to that of a symphony. "The leaves descend in golden glory," he writes. "And so with slow chords in imperceptible fine modulations the great music draws to its close, and when the silence comes you can scarce distinguish it from the last far–off strains of the woodwinds and the horns."

This leaves us, in the words of Debra Rienstra, the Calvin College colleague of co–editors Gary Schmidt and Susan Felch, with "trees spare and cracked bare / slim fingers in the air." But to British poet Alice Meynell, there is no melancholy in the "hundred exquisite browns" of November. The nourishing decay of the leaves is a natal, not mortal, act. "Life destroyed that autumn, not death."

Autumn is replete with these contradictions, joining birth and death, beginnings and endings, the bounty of harvest and the barrenness of imminent winter. The preface reflects on Longfellow's "paradoxical" two poems entitled "Autumn," which portray the season first as a tired old man, then as a benevolent goddess.

And so we associate autumn with both somber reflection—September 11, Veterans Day and Remembrance Day, and the more spirited Día de los Muertos (Day of the Dead)—and with sacred festivity, including the high holy days of Judaism and, of course, Thanksgiving. It is also a time of transition and change, with the start of a new school year, the first zip–the–coat, political elections, and the anticipation of another Christmas around the corner. And so this autumnal anthology is interspersed with passages from the Book of Ruth, who embarked on a life–altering journey to Bethlehem with Naomi at the beginning of the barley harvest.

As in Ruth, the undercurrent of divine providence runs through these accounts of autumn, offering a satisfying answer to the function–centered truth of scientific reductionism. This answer is best articulated by Julian of Norwich, reflecting in the 14th century on the fruit of the harvest. She wonders why a fragile hazelnut endured the season to rest in her hand. "And I was answered in my understanding, 'It lasts now and every shall last because God loves it.' And so everything has its being by the love of God."

Nathan Bierma is an editorial assistant for Books & Culture. He writes the weekly "On Language" column for the Chicago Tribune.