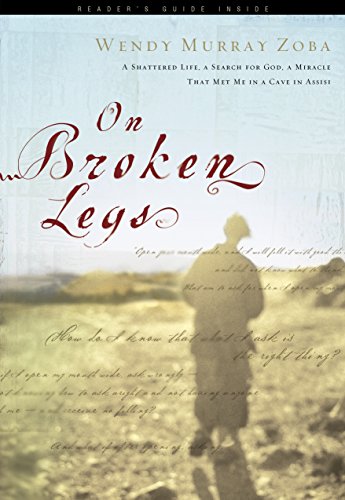 On Broken Legs: A Shattered Life, a Search for God, a Miracle That Met Me in a Cave in Assisi

Following the success of Angela's Ashes, the publishing market was inundated with memoirs. The running joke among editors and writing professors was, "Quit navel–gazing. It's not all about you."

I agree and disagree. True, some memoirs seem outrageously self–absorbed. The inner character of the writer stays the same from the beginning to the end of the book, which is infuriating to me, the reader. (What was the point of this excursion?) Kyoko Mori's The Dream of Water is a case in point. But it was Mark Twain who said, "I read to know I'm not alone." This is also true for me. I love other people's stories.

Thankfully, there's been a shift in spiritual memoirs—I'd say in the last two years—to include not only an author's ruminations but her conclusions as well. Not that she has solved the twisting and turnings of her life, just that she has gone from place A to place B in a thoughtful sort of way. Nora Gallagher's Practicing Resurrection: A Memoir of Work, Doubt, Discernment, and Moments of Grace and Lauren Winner's Girl Meets God: On the Path to a Spiritual Life come to mind.

Wendy Murray Zoba, a senior writer for Christianity Today and author of seven books, writes of her year–long struggle with "the Dark Night," a term coined by St. John of the Cross—"the dark night of the soul." Within the space of a few months, her pastor–husband divorces her, her friends abandon her, her then–grownup boys leave home, her home sells, her car is rear–ended, and she undergoes gall bladder surgery. Through it all, Zoba finds comfort in the mundane—taking friends' girls to school, putting a doll's head back on, feeding a baby bird, and snapping pictures of dinosaur prints. She talks of "rendering obedience" to a color–coded lists of things–to–do, just to maintain her forward motion—things like faxing her health insurance applications, paying bills, adjusting her budget, and hanging curtain rods. She persists in her prayers to God, hoping to receive an answer, which never comes until the end of the book. All she can do is think, I will follow You, even if on broken legs.

She uses a metaphor of falling into a hole—the slippery descent and the laborious ascent—to visualize her ordeal.

Thomas Merton calls such testing the "interrogation of suffering." He says that if we, as God's own offspring, are intended to be alive in the way he created us to be, "the interrogation of suffering will call forth from us both our name and the name of Jesus." I take that to mean that by the end of this process, if it hasn't killed you, it will have made you who you were meant to be.

She views herself as her reader's advocate, should he or she be floundering:

He [God] promised me as Virgil did Dante, that "in this underworld I'll not forsake thee." Neither will I forsake you as we pass this way together. It is my hope and plea that if you are lost somewhere in the Dark Night, that by God's mercy his hand will reach you through my hand and my story, so that once we are through it, you will know your own name, and the name of Jesus, too.

Because Zoba's story was powerful enough to move me to tears in some places, I wanted even more from her. I wanted more candor—the Anne Lamott, Traveling Mercies kind of candor. Although Zoba makes it very clear in the book's introduction that "the reader will understand the sad events relating to [her] divorce are deeply personal and sacred" and "that the book is not about [her] failed marriage," I needed to see more of her struggle. I didn't need all the details about her marriage, but I wanted to know, was she ever furious at her husband? At God? At her circumstances? Maybe she didn't feel anger. (No—she must have!) Maybe she wrote it, and her editor had her remove it. Maybe this gap says more about Christian publishing than it does about her. I don't know. All I know is: I wanted her to blaze a trail through her anger, just like David and Job did, rather than stifle it.

Then again, all of us grieve differently. (My father–in–law read C. S. Lewis's A Grief Observed after his wife died and chafed at how he found no solace in it.) And all of us can use a reliable companion like Zoba, whether we're in the middle of our own Dark Night or reading her memoir from a vantage point of relative tranquility and peace, reminding ourselves that no one escapes suffering and loss, that we're all radically dependent on God.

Elissa Elliott is a writer living in Rochester, Minnesota.