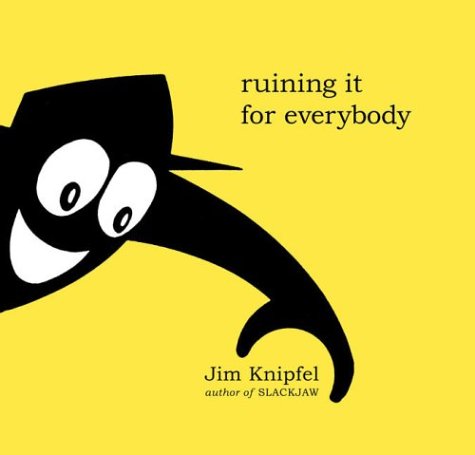 An unsparing new memoir by the author of Slackjaw.

As Bill Clinton discovered while penning his memoirs, writing an autobiography is a painful experience. The author has to dredge up old memories—many better left undisturbed—examine them from every angle, and try to repackage the events so that the audience can relate.

Novelists can churn out a dozen or more books. They aren't bound by events except in the broadest sense. Writers of fiction brazenly recycle earlier material into later narratives; change geography, chronology, and perspective; and kill off characters when they get bored with them. Memoirists have more shallow wells to draw from, and consequently tend to author fewer volumes. Each installment is expected to break new ground, setting the facts of one's life straight for posterity—a balancing act that is lousy with difficulties. Unless they're deranged, it's not easy for autobiographers to kill off the bores.

So I began reading Jim Knipfel's third memoir, Ruining It for Everybody, wondering if he hadn't run this particular well dry. Knipfel's first memoir, Slackjaw, with its brutal bring–on–the–pain honesty and pitch–perfect prose, was a critical and commercial success. Quitting the Nairobi Trio, a more focused story about his time in a mental ward after a suicide attempt, was also worth reading but fell into the sequel trap: not quite up to the original. Why even bother with a third installment now, with the author only in his thirties?

Knipfel—who published a novel, The Buzzing, between his second memoir and the new one—says that he needs the money, but there's also something else. In the intro, he goes out of his way to spell out his maladies—his creeping blindness, his epilepsy, his well–marinated liver and smoke–clogged lungs, the scars and kidney failures from multiple suicide attempts—before dropping this revelation on us:

Two weeks before I sat down to write this, a neurologist, after viewing the results of my latest MRI, informed me that I seem to have a case of what he called "premature brain atrophy." In layman's terms, it meant that my brain was shrinking at an alarming rate. Not at all unheard of except that it was something that usually happened to people in their sixties or seventies, not their thirties.

He tries to play this off as not such a big deal—just one more 20–car pileup on the highway of his life—and, admittedly, Knipfel has managed to produce a readable weekly column for over a decade under conditions that would finish off most writers. Still, there's something about this memoir that puts it in a different reality than the first two. If the first book was a memoir of his body failing, the second of his mind, this latest volume recounts the fading of his spirit.

But the book is also something more: something unexpected. From the dedication to his long–time girlfriend Morgan to the final celebratory words ("Cheers, baby."), Ruining It for Everybody is an improbable love letter to his friend, helper, and muse. She arrives at the New York Press at roughly the same time he does and holds the relationship together in spite of job changes and his foolish attempts to bust it up.

Most of Knipfel's work could be described as confessional, but the regret is most acute when he discusses the ways he's failed his girl: snapping at her, stealing her ideas, failing to stick up for when he feels he should. He seems startled by the fact that there she still is, every night, at their prearranged neighborhood bar: still able to make him laugh after all these years.

The writing this time isn't as tight as in the last two volumes, and Knipfel has a tendency to linger and wonder. He recounts the story of the two of them—she a lapsed Catholic, he a lapsed Lutheran—stumbling into St. Patrick's Cathedral after a night at the bar, and of Morgan stopping by the votive stand to light a few candles for her departed grandmother.

Knipfel explains that he is "hardly a religious man" and that he certainly wasn't "touched by God while I was there that night." And yet, there was "still something—something good and beautiful, even poignant —about stopping into St. Patrick's (and stopping into St. Patrick's all sloppy drunk) on a chilly autumn eve, about lighting a candle for a grandma who meant something to you, about just being there for a while. I don't know what it was, but it was one of those brief, rare, good moments, like sitting at an old empty bar you'd never heard of or getting your feet wet in the ocean for the first time, that'll stick around for a while."

Jeremy Lott is a contributing editor to Books & Culture.