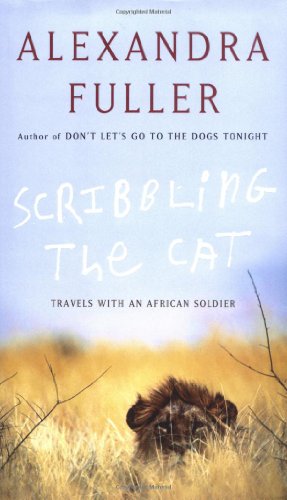 A riveting memoir by the author of Don't Let's Go to the Dogs Tonight.
July 2004

Alexandra Fuller is a white woman, born in England but raised in Africa. Her first memoir, the bestselling Don't Let's Go to the Dogs Tonight, told how her family came to live in Rhodesia (now Zimbabwe) in the early 1970s and experienced the civil war that resulted in the overthrow of the whites–only government and installation of black majority rule.

After the war, Fuller's parents and older sister settled in Zambia while Fuller married an American and moved to Wyoming as a compromise with her husband. But every so often she returns to her parents' fish farm on the Pepani River—a place unequipped with plumbing or walls.

A Christmas visit a few years ago inspired the trek that is the subject of her second memoir, Scribbling the Cat. Over drinks at Chongwe Lodge, a village bar, talk turns to man identified only as "K," a white veteran of the Rhodesian civil war known for being "a tough bugger," "a violent enough teetotaler," and a "bloody good fighter." Intrigued—and ignoring her father's reminder that "curiosity scribbled the cat" (an African variant of the proverbial warning)—Fuller drops in on K at his banana farm.

K is a lion of a man, tattooed and work–worn. "He looked bullet–proof," Fuller writes. "And he looked as if he were here on purpose, which is a difficult trick to pull off in this wooly climate. He looked as if he were his own self–sufficient, debt–free little nation … as if he owned the ground beneath his feet, and as if the sky balanced with ease on his shoulders. He looked cathedral."

Fuller proposes a journey to K's old battlefields, through Zambia to Zimbabwe and Mozambique. On the way, he confronts his ghosts and she chronicles his stories—including the childhood experiences that profoundly shaped him. Ostracized, bullied, and raped by the bigger boys at his boarding school, he was nevertheless sent back by his parents year after year. "That's where I learned I could hit," he explains.

He has maimed and killed more men than he can count. He describes one episode in the Army when he "knocked out three cab drivers. … One of them was in a wheelchair, one of them had to come to court in a stretcher—I'd ripped his scalp off." In a particularly gruesome passage, he recalls torturing a woman to extract the whereabouts of local soldiers he's hunting.

K's loathing for much that he has done is palpable, but he has not simply wallowed in guilt. A born–again Christian, he swore off alcohol—it fueled his rage—and for a time ran a medical clinic. He breaks into tears when he talks about the death of his young son and disintegration of his marriage. "When I am lying in bed at night and thinking about how I got here I can only say that it must have been God's plan from the start."

The journey also ushers in a cast of eccentric characters from K's former life—men who, like K, have been molded by war and who display varying degrees of dysfunction and disillusion. Most notable is Mapenga, (Shona for "crazy"), a man given to long periods of self–indulgent silence. He occupies an otherwise uninhabited island on a Mozambican lake with a fully clawed, untamed lion he sometimes puts in a cage.

Fuller's story is brutally honest, including an instance of her own marital infidelity. She doesn't gloss over the pervasive, albeit not overtly hostile, racism of African whites—not least K himself, who habitually refers to blacks as "gondies" and persons of mixed blood as "goffles." Nor does she romanticize black Africans as a people whose pristine culture was destroyed by imperialist whites.

Her prose is exuberantly sprinkled with African slang (luckily she provides a glossary), and the book is dotted with her own small, black–and–white photos—funny roadsigns, affectionate portraits, everyday scenes—that perfectly match the tone of her writing.

Those who haven't read Fuller's first memoir may feel that they don't ever fully come to know her in this book. But after too many encounters with the rampaging narcissism that dominates travel memoirs these days, many readers will find Scribbling the Cat a blessed relief—and begin to wait impatiently for her next book.

Scribbling the Cat is available from Amazon.com and other book retailers.

Don't Lets Go to the Dogs Tonight is also available from Amazon.com and other book retailers.

The Naked City | The story of the 1977 blackout in New York–the occasion of widespread looting and destruction–has some surprisingly timely lessons for America in 2004. (April 19, 2004)