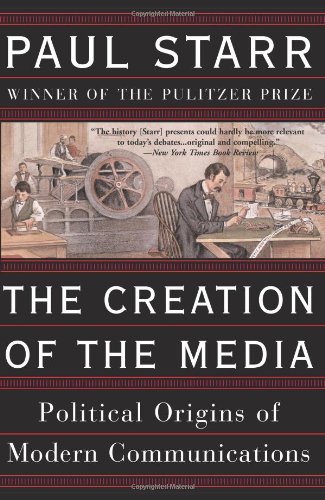 How the Monster Grew

A Pulitzer Prize-winning historian looks at the origins of modern media.

The first American newspaper, Paul Starr tells us in The Creation of the Media, was published in Boston in 1690 under the title Publick Occurrences, Both Forreign and Domestick. In the four–page debut edition, publisher Benjamin Harris stated his intention to publish monthly, "or if any Glut of Occurrences happen, oftener."

Three centuries later, inundated as we are by the news crawls of 24–hour cable channels and instant headlines on our Palm Pilots, we may regard Harris' statement as signifying an Eden of media, an innocent age of journalistic temperament that has since been corrupted by compulsive urgency. By now, cable news has disposed of the notion of "the news of the day" in favor of "at this hour," and some channels have replaced "Live" on their onscreen graphics with the even grabbier "Right Now." Starr doesn't say it, but "the creation of the media" was the creation of a monster.

The roots of the media's insatiable instaneity may lie in the penny press of the 19th century, when, Starr says, a perfect storm of cheap print and mass literacy encouraged publishers to try to reach a large audience with sensational stories. Founded in 1833, Benjamin H. Day's New York Sun quickly became the nation's bestselling newspaper, due in no small part to its hoaxes, such as a series about one astronomer's "discoveries" of life forms on the moon, and its media circuses, such as its breathless coverage of the 1836 trial of a politically well–connected merchant in the murder of prostitute Helen Jewett. Neither Jayson Blair nor Court TV, it seems, had anything on the Sun.

But Starr is not all that interested in early news reporting itself, much less its parallels to our age of media excess. Instead, his book is mostly limited to how government and business influenced the development of different kinds of communications technology. It is essentially a political science lecture, padded with catch–all academic phraseology akin to this statement by reviewer Nicholas Lemann in the New Yorker: "The political, social, and economic arrangements of the media are what's crucial." (Who could disagree with that?) The researcher and specialist will appreciate Starr's exhaustive research; the rest of us (I found out after 384 pages) can reasonably turn straight to page 385, where Starr starts his 17–page summary and introduces questions for further discussion.

Starr's thesis, or at least his point of departure, is that the state played a larger role in the creation of the American mass media than we tend to think. Had the federal government not heavily subsidized early newspaper publishing, the postal service, and public education, there wouldn't have been many newspapers to read, ways to deliver them, or people to read them. (At one point, America's ratio of post offices to people was four times that of England or France). Had the government not regulated—and in some cases trust–busted—the early media conglomerates of the 19th century, public discourse would have been stifled. To use Starr's poli–sci jargon, the government made "constitutive choices" that determined how the media took shape as a commercial institution. Still, Starr emphasizes, America's federal fiddling was nothing compared to that of England or France, which strictly controlled—or owned outright—the mass media as they emerged, suffocating technological innovation and private enterprise.

Starr's extensive record may win him another Pulitzer (he won the 1984 prize for The Social Transformation of American Medicine, which was instrumental in the conception of Bill Clinton's ill–fated universal health care plan), and if so it will not be undeserved. But Starr's story is, nonetheless, a maddeningly partial account of the role of the media in American history. He focuses almost exclusively on how news and entertainment were disseminated, with hardly any mention of what that news and entertainment was, and how it shaped the public mind.

For that story, turn to eminent historian and media theorist James Carey (who sits on Lemann's faculty at Columbia). As Carey observed in his 1989 book Communication as Culture: Essays on Media and Society, most scholars are content with the "transmission" model of mass communication and ignore the "ritual" model. "If the archetypal case of communication under a transmission view is the extension of messages across geography for the purposes of control, the archetypal case under a ritual view is the sacred ceremony that draws persons together in fellowship and commonality." Carey says the mass media serves this function, providing a cause and the means for a shared public experience, by which a tribal conception of reality "is created, shared, modified, and preserved."