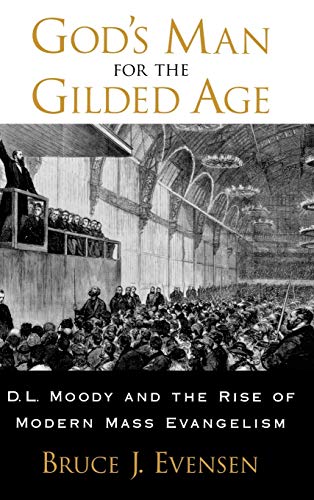 Moody, the Media, and the Birth of Modern Evangelism

The death of D. L. Moody in 1899 was a headline story for the American press and the final installment in a 30-year symbiotic relationship between the evangelist and daily newspapers both in America and Great Britain. Bruce J. Evensen, a communications professor at DePaul University, masterfully recounts both how the newspapers elevated Moody to celebrity status and how they came to occupy a central role in modern mass evangelism. Less satisfactory is the author's portrayal of the religious, economic, and social forces which swirled around the Moody revival campaigns. The author's adulation of both Moody and his 20th-century spiritual heir, Billy Graham, makes this a bright shining portrait of urban revivalism unclouded by even a shadow of irony.

Evensen meticulously mines the minutia of press coverage to portray six urban campaigns conducted by Moody: the ascent to fame in Britain in 1873, the faltering Brooklyn revival and the success stories in Philadelphia, New York, Chicago, and Boston.

Moody and musician Ira Sankey arrived in Britain in 1873, unheralded by the press on either side of the Atlantic. Two years later Moody returned to New York as an international celebrity. With growing expertise in each successive city in Scotland, Ireland, and England, Moody had mastered a technique for drawing crowds by a rational process of uniting Protestants across denominational lines, using saturation publicity in both the secular and religious newspapers. The stir created by this skillful strategy attracted unbelievers who might otherwise never have attended a local church service.

Moody returned to a bidding war for his next American campaign. Unwisely perhaps, he accepted the option of church-dominated Brooklyn over Philadelphia. The Brooklyn revival drew newspaper coverage and crowds, but Moody was preaching to the choir of the converted and the event was almost overshadowed by the cause celebre of Brooklyn preacher Henry Ward Beecher, who had been caught in a messy scandal of alleged adultery. Beecher—by this time a sad, anxious man—lurked around the edge of the crowds drawn to Moody.

The nine-week campaign in Philadelphia was a greater success. The city's powerful business establishment—led by John Wanamaker, George Stuart, Anthony Drexel, and Jay Cooke—was firmly behind Moody. Wanamaker had 300 of his department store employees "volunteer" as ushers. Indeed, Wanamaker secretly owned the Grand Depot where the revival was held, and two months after Moody left, converted the tabernacle into a new location for his department store The campaign neatly coincided with the city's centennial, and President Grant and other national political figures attended while in town, further heightening the hype surrounding the revival.

In 1876 Moody went to New York City, transforming the newly bankrupt P. T. Barnum's Hippodrome into a tabernacle for revival. Again the barons of the Gilded Age, this time headed by J. Pierpont Morgan and Cornelius Vanderbilt, underwrote the campaign. Evenson admits their possibly mixed motives for such benefice. "Certainly they hoped for a spiritual revival in their city, and almost as decidedly did they pray that the excitement might overwhelm the public's growing disaffection with national scandal and depression."

Later that same year, Moody returned to Chicago, this time as a prophet with honor in his own land. The Chicago Tribune and rival papers boosted Moody's revival as a point of civic pride. The city, recently devastated by a horrendous fire—which destroyed Moody's first attempt at building a tabernacle—could not be outshone by east coast cities.

When the crowds faltered, Moody devised theme promotions to renew public interest. For instance, there was the special night for "fallen women," intended to attract prostitutes who worked less than a mile away. Evensen is coy about whether this was a crass publicity stunt to increase newspaper coverage, or a sincere outreach to suffering women. Even less clear is what welcome would later await the converts who went to the inquiry room in local churches.

Seventy-eight local churches organized the Boston campaign in the winter of 1877. The two competing local newspapers made Moody a headline event with daily transcripts of his sermons on their front pages. Unitarians kept their distance, but a wide range of Congregationalists, Episcopalians, Methodists, and Baptists united behind Moody. The Tremont Tabernacle, with seating for 7,000 souls was built in the shadow of A. J. Gordon's Baptist Church. When attendance flagged, special trains offering free or half-price fares brought in small-town and rural folks to fill the seats. By the conclusion, a million people had attended the revival, and 6,000 new converts were reported. (Evensen ignores the fact that Boston was no stranger to systematic citywide revival. The 1858 Boston revival had used techniques similar to those used by Moody.)