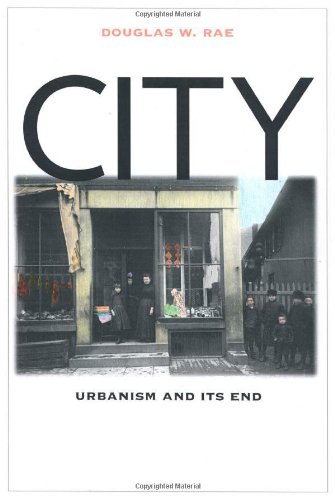 In City: Urbanism and Its End, a new history of New Haven, Connecticut, the city (in its late 19th-century form) is an ambiguous heaven and the suburbs that relentlessly followed are hell. Which leaves us where, exactly?
December 2003

Next time you find yourself in Douglas Rae's hometown of New Haven, Connecticut, you could treat yourself to a walk through the campus of Yale University, take in a play at one of the city's three Tony Award-winning regional theaters, or maybe make a morbid visit to the colonial-era crypt off New Haven Green. Or you could opt for an even more unlikely errand. You could haul out Rae's whopping 432-page City, flip through the copious charts and maps that show which buildings used to be on which city blocks, and tour the New Haven that used to be.

I've never been to New Haven, but I think I'd choose the campus tour or the crypt, since City, a book that should beg to be taken to the streets as a field guide until it is dusty and dog-eared, proves regrettably inaccessible. Students and scholars of urban policy—as well as New Haven natives and residents—will consider it a solid and essential resource, and only they will be able to find a technical or factual flaw in Rae's exhaustive effort. But amateur city lovers may find that the tedium of this record impedes much inspiration to cherish urban vitality and lament suburban sprawl.

Rae's effort is impressive if not inviting, sketching a historical arc from 19th-century industrial convergence on downtown New Haven, as farms gave way to factories as the nation's primary economic engines, through the formation of what he calls a "dense civic fauna" of neighborhoods and social organizations, and continuing through the depletion of cities through the mid- to late-20th century, as city-dwellers followed the wider electricity grid and brand new highways right out of town. (New Haven led the nation in spending on this so-called urban renewal—who knew?—making it a good subject for such a study.)

The pace of this transformation was staggering: the number of grocery stores in the city proper, for example, plunged from 494 in 1950 to just 153 in 1970. The book serves as something of a companion to Jane Jacobs' 1961 classic, The Death and Life of Great American Cities. Jacobs shows how cities should go about restoring healthy streets and sidewalks; Rae shows how the streets and sidewalks came to be so desolate in the first place.

While Rae is meticulous about the what and when, he is negligent of the how and why. Wading through his blow-by-blow account of all the businesses and mayoral administrations that came and went, the reader simply loses sight of the forest for the trees. Granted, the author may have wished to spare us disorienting tangents. However, ignoring too many over-arching questions may confuse the reader about his aims: does this aspire to be an argument or a neutral record? The intention seems to be the former; the effect is closer to the latter. The general reader stands to be the most disappointed. When I picked up the book and read the subtitle—"Urbanism and its End"—I assumed "end" meant "purpose" rather than "disappearance," as in: "urbanism to what end?" Turns out I was sadly mistaken.

Which makes it all the more tantalizing when Rae touches on and then charges past some interesting broader questions, as he does for a page and a half in Chapter 1, when he briefly visits the notion of autonomous rural existence as an American ideal. America is, he acknowledges, "a nation that had from Jefferson's time identified its soul with the countryside and with the independence of rural life."

Rae mentions this in light of early laments over the emergence of big cities in the industrial era, with their fetid tenements and sewage-strewn streets. But he could have addressed some provocative relevant questions: Were not the cohesive and vital (and, yes, smelly) urban centers of the late 19th and early 20th centuries an aberration from an agrarian pattern of Western settlement of this continent? Does not spreading out make a lot more sense on this side of the Atlantic Ocean than on the other, where density requires centralized cities and mass transit?

A nation composed almost entirely of immigrants and their descendents, we are "distrustful of concentrated authority," notes novelist and city lover Jonathan Franzen, and so we harbor a "New World ideal of house-as-kingdom, with its implications that what you earn and what you buy matters far more than where you do it."

What does this mean for the rise and fall of urbanism? Was urbanism good medicine for an overly libertine population? Or was it an incongruous European ideal awkwardly imposed on the wilderness of the New World? More pointedly, did urbanism ever have a chance, even before the Federal-Aid Highway Act and Federal Housing Authority literally paved the way to the suburbs?

As it stands, Rae's book implicitly presents industrial-era cities as the Eden from which suburbanized America has fallen. But was not sprawl, for all its environmental calamity, social inequality, and aesthetic monotony, nonetheless a natural development for a nation wired to pursue verdant isolation? New Haven's name is idyllic itself, in the family of bland suburban appellations next to "Forest Hills" or "Glenview"; no -polis or -ton suffix here to suggest interdependence. Rae starts by suggesting the answer to this crucial question is yes, as he voices Marx's arguments about capitalism's inherent "creative destruction," but the rest of the book is a more narrowly focused elegy.

And whither Yale? Toward the end of the last chapter, Rae finally brings the school into the picture, examining its relationship with city government as the school unsuccessfully lobbied to build a dorm on an under-utilized block in town. In the last paragraph of the book Rae reveals that while New Haven's story is mostly "representative of older American cities," its relationship with Yale is unique. "That new tale is, alas, the subject of another book." Given the plodding momentum of his text up to this point, Rae risks prompting his readers to regret that they aren't reading that book instead.

Nathan Bierma is an editorial assistant at Books & Culture.

City is available from Amazon.com and other book retailers.

Related Books of the Week: Why There Will Be Sidewalks In Heaven

The Difference Between Conservatives and Prolifers | William Saletan unspins, and respins, the abortion debate (Sept. 8, 2003)

'A Golden Age' of Religious Tolerance? | The Ornament of the World analyzes how the intellectual elites of medieval Spain eschewed fundamentalism and showed surprising sensitivity in reconciling competing truths. (Aug. 11, 2003)

The Terror of the Therapeutic | Margaret Atwood's new novel considers the price we may pay for looking to technology to remedy our ills, personal and social. (July 28, 2003)