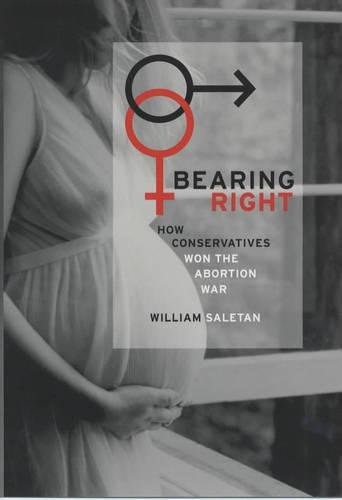 The Difference Between Conservatives and Prolifers

No it's not that kind of a victory. In his first book, Slate political correspondent William Saletan doesn't argue that prolifers are well on their way to a sweeping victory in this next or any subsequent election—though, given a number of trends, that may well happen. Rather, the conservatives who should declare victory in the abortion wars are a different voting bloc, "prochoice conservatives."

Prochoice conservatives differ from prochoice liberals in a number of ways. They tend to be drawn from the middle or upper classes, they are predominantly white, and they don't necessarily believe in a woman's right to choose as such. Rather, their support for abortion rights is grounded in the belief that the government should not interfere in the affairs—sometimes literally—of the family. Unlike liberals, they don't believe government funding should go to abortions or family planning, and they aren't averse to curtailing abortion at the edges.

So: Parental consent laws are popular because they strengthen the authority of the family (particularly the father). Partial birth abortions are condemned as infanticide, reviled in poll after poll, and then passed again into law after the Supreme Court strikes down the statutes of 29 separate states. Welfare programs discourage the birth of new children (and, according to some studies, cause more abortions). Democrats swear fealty to Roe v. Wade as a matter of course, and Republicans hem and haw and then say, meekly, that the country is not ready for drastic change just yet. All of this happens with massive public support.

Moreover, veterans on both sides of the abortion fracas are clued into this. In the '80s, faced with massive repudiation at the ballot box, through a variety of prolife referendums and initiatives, prochoice liberals abandoned the seamless-garment argument (e.g., abortions for everyone, including government money for those who can't afford them) as a pipe dream and started speaking the language of voters whose politics and social mores differed radically from their own. In the last presidential primary seasons, the National Abortion Rights Action League endorsed Al Gore over Bill Bradley, in spite of the latter's more solid voting record on abortion legislation. They did so for purely defensive reasons: Gore was believed the best candidate to secure the modest gains of the Clinton years.

Likewise, with George W. Bush, prolifers swallowed an awful lot in order to have a shot at rolling abortion back. Like most Bushes, he started off as a prochoicer and was not fond of talking about the subject. As governor of Texas, he pushed hard for, and won, the passage of a parental consent law, and he pledged to replicate that, and similar efforts, on a national scale. But touch Roe, or agree to appoint only prolife judges, or take a position on RU486? Get real. As part of his strategy of avoiding hard abortion questions, he always promised to promote a "culture of life."

The funny thing , says Saletan, is that no one knew quite what this culture of life would look like. Granted, it meant an end to government abortion funding, at home and abroad; legislation to ban partial-birth abortions; and the occasional rhetorical flourish—but these were simply smart politics: payback to prolife voters (and prochoice organizations for that matter) that enjoyed enough popular support to render them uncontroversial. But other actions, such as the Department of Health and Human Services' decision to classify fetuses as human beings for the purposes of medical treatment, were almost wholly unexpected. In fact, the image of prochoice feminists railing against aid to poor unwed mothers—aid dished out by an administration chuck full of avowed conservative Republicans—is a real beaut. Stay tuned for further incongruities as the 2004 race heats up.

Bearing Right: How Conservatives Won the Abortion War can be purchased at Amazon.com and other book retailers.

The University of California Press website offers an excerpt from the book.

Bearing Right has been reviewed by the Los Angeles Times, and The New York Times (caption. site). The National Right to Life Committee's Dave Andrusko has reviewed the book twice.

Earlier editions of Books & Culture Corners and Book of the Week include: