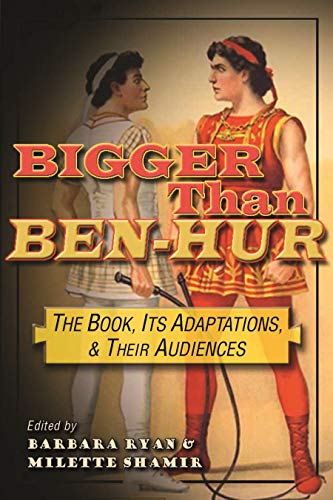 Bigger than Ben-Hur: The Book, Its Adaptations, and Their Audiences (Television and Popular Culture)

The many lives of "Ben-Hur."

Today, Ben-Hur is best-known as the 1959 film that grossed millions of dollars, won eleven Academy Awards and, coming three years after The Ten Commandments, cemented Charlton Heston's position as the personification of 1950s Bible epics. But the story of Judah Ben-Hur, and his quest for revenge against the childhood friend who betrayed him, had been immensely popular in a variety of media for almost eighty years before that film came out, and there have been several new tellings of the story in the decades since—culminating this year in a 3D action epic from the producers of The Bible, the Oscar-winning writer of 12 Years a Slave, and the director of such films as Abraham Lincoln: Vampire Hunter.

The new film's rather eccentric pedigree speaks to how this story has appealed to people on very different levels—some sacred, some unabashedly secular—ever since Lew Wallace's novel was published in 1880. As I write, the release of the new film is still several weeks away, so I cannot comment on it in detail here, but I just finished reading Bigger than Ben-Hur: The Book, Its Adaptations & Their Audiences, a collection of essays that look at everything from the original novel to the miniseries that aired on Canadian television in 2010. It has been fascinating to see how Wallace's story has evolved over the years and how the people who adapt it have often sold it as pure spectacle to a mass audience on the one hand while making a special pitch to Christians on the other hand. The story might morph over time, but the marketing has been remarkably consistent.

The parallels come through most clearly in Howard Miller's essay on the hugely successful stage adaptation that opened on Broadway in 1899 and toured the country until 1920. Consider: the play was marketed heavily to a religious audience that, until then, had avoided and even condemned the theater,[1] while the new film has actively courted the same "untapped audience" that made The Passion of the Christ ...