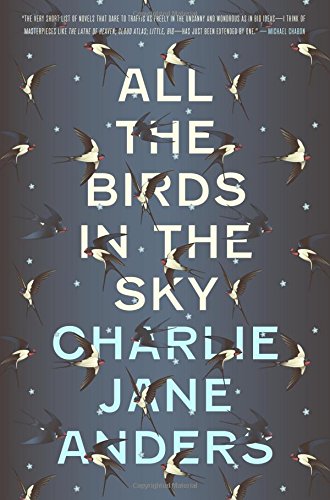 Apocalyptic fiction with a difference.

In the contemporary sci-fi class I taught last year, the students and I discussed possible reasons for the current popularity of apocalyptic scenarios. The answer from the 18-24 year-old crowd? Everyone knows it's going to happen sooner or later. Global pandemic, political and/or financial unrest, environmental disasters (always leading to said unrest), the establishment of futuristic dystopian societies, even alien invasions: take your pick.

In All the Birds in the Sky, Charlie Jane Anders uses some of these same tropes, but the book differs from the norm in two major ways: by providing hope, a solution to the madness before the world is too far gone, and by demonstrating that the solution to our problems is to work together. Not in a cheesy, "there's no 'I' in teamwork" way, but in a truly deep, organic, and redemptive way. And she does so not only by postulating the combination of magic and science as the ultimate solution (resolving the major conflict of the book) but also by combining elements of fantasy and sci-fi, adult and YA fiction. In this way, the message of the book isn't only in the plot—it's in the very fabric of the novel's construction and its winsome appeal to audiences that are often regarded as sharply distinct. (Warning! Spoilers to follow.)

From the very beginning of the book, it's obvious that one of the main characters, Patricia, is a fantasy novel character. A sensitive six-year-old who cares for nature in a family that is cruel and makes no effort to understand her, Patricia has a dreamlike experience in which she can talk to birds who lead her to an enormous tree and ask her the "Endless Question": "Is a tree red?" While she doesn't trust the experience as reality, it remains with her as she grows, attends school, and as a young teenager makes friends with a boy named Laurence, who hates nature, and is a science whiz who has created a two-second time machine. We've already met Laurence, in Chapter 2, which places him firmly in the sci-fi ...