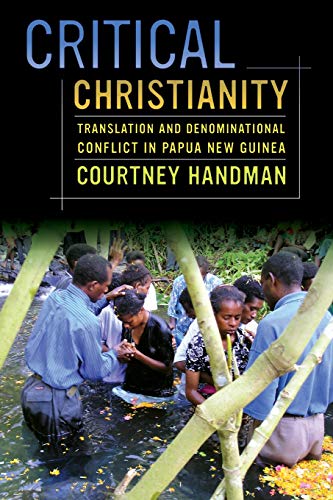 A New Perspective on Schism

That Protestants are prone to schism is no surprise—it's in the name, for heaven's sake. However, just what causes schism is not always obvious, apocryphal stories of congregations that split over the color of the new fellowship hall carpet notwithstanding. The driving forces behind schism are a complex tangle of historical, relational, theological, and practical concerns. This means that schism is a kind of knot that social science is especially good at unravelling. Toward this end, Courtney Handman offers us a sophisticated look at denominational conflict in a place many of us would not necessarily think to look for it: the Waria Valley in northern Papua New Guinea (PNG).

Despite its remoteness, the Waria Valley is a highly appropriate location for this study because of PNG's position in both missionary and anthropoligical thought. Over the last several decades, PNG has attracted scores of missionaries and anthropologists, thanks primarily to its historic cultural isolation and staggering linguistic diversity—more than 800 languages spoken by a population of fewer than eight million people. The result has been a tremendous amount of ethnography, a great deal of which has explored the consequences of Christian missionization. The most prominent argument to emerge from anthropological treatments of Melanesian Christianity is that conversion requires individualism. Perhaps because this line of analysis has been so central, anthropologists have largely ignored the study of Christian social groups, whether churches or denominations, and it is this lacuna that Handman seeks to address. She argues that schism is a natural part of Christian, and especially Protestant, life: "not the failure of Christianity, but its very practice."

The first Christian missionaries to the Waria Valley were Lutherans, whose greatest challenge was the numerous languages spoken in the region. Their response was to develop a local lingua franca that would enable leaders and laypeople ...