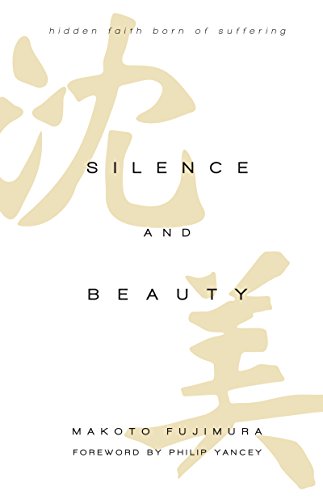 Fumi-e are stepping blocks, often made of bronze, carved with Christ's figure, created for the sole purpose of preventing the spread of Christianity. Every New Year's Day, the fumi-e would be lined up for villagers to walk on to exhibit their rejection of Christ. Fujimura first encountered these fumi-e in the Tokyo National Museum, and he notes how smoothly worn away is the face of Christ on these blocks. In Japan, there is an aesthetic called wabi sabi, which means "wearing away" and refers metaphorically to the idea that "in death and the ephemeral, enduring beauty can be found." While these fumi-e elicit sorrow for the beaten icon and those forced to publicly denounce their Savior, they also show a true portrait of Christ. "Its worn-smooth surface may capture Christ's true visage more than any paintings of Christ done in the West," Fujimura suggests. These trampled images of Christ remind us of the truth—that even Christ's closest disciples rejected him.

At the crucial moment of Endo's novel, Father Rodrigues steps on the fumi-e and publicly renounces Christ. However, Fujimura insists that the conclusion of Silence undermines what appears to be apostasy. Rodrigues' final words affirm his faith: "I am the last priest in this land. But Our Lord was not silent. Even if he had been silent, my life until this day would have spoken of him." By stepping on the fumi-e, Rodrigues forgoes his European colonial vestments of religion for a Japanese faith, a hidden Christianity. This idea of "hidden Christianity" seems oppositional to the Gospels that tell us not to hide our faith; if we are silent, the very rocks will cry out! Yet, Fujimura asks, "How do we remain faithful in a context in which dying for Christ is possible but living for Christ is made impossible?" Which is more valuable, Fujimura seems to wonder, the martyr or the hidden saint?

One of the most moving passages in Silence and Beauty is the story of two young martyrs. In 1597, before the period of Endo's novel, 26 Christians were marched through the streets of Nagasaki. Their ears and noses had been cut off, so blood drenched the snow as they walked. When they arrived at the top of Nishizaka Hill overlooking the city, there stood 26 crosses prepared for their execution. Purportedly, an 11-year-old boy among them responded, "Show me my cross," to which another young boy echoed, "Show me mine." Centuries later, Fujimura stood atop this hill, imagining the tragedy of these martyrs as well as recalling the devastation of Nagasaki in August 1945. For Fujimura, whose home was walking distance from the terrorist attacks on New York in 2001, these places are all "Ground Zero." They are places of sacrifice, suffering, and death.

Yet, Fujimura insists, "In the mystery of silence and beauty God speaks through our broken lives facing our Ground Zero." Somehow, in some unexplainable way, beauty exists in spite of (or even through?) Ground Zero. The Japanese word for "beauty" is composed of two ideograms—"sheep" and "great." In Japanese, then, beauty is a composite of great sacrifice. Fujimura ties the Japanese word for beauty to the prophet Isaiah's description of Christ. In Isaiah 53, the prophet writes, "He had no beauty or majesty to attract us to him, nothing in his appearance that we should desire him." In this same passage, Christ is called a sheep, "a lamb to the slaughter, and as a sheep before its shearers is silent, so he did not open his mouth." The key to understanding Christ's beauty in this passage is the phrase "to attract us." "We all, like sheep, have gone astray," the prophet writes. We cannot see the beauty any more than we can hear the language of silence. With eyes that cannot see and ears that cannot hear, we step on "our own fumi-es." While Silence and Beauty "may focus on Japan," Fujimura writes, "the mystery it solves may generate important conversations to find antidotes to the death and malaise of our souls in this postmodern, pluralistic era."

In the foreword to Silence and Beauty, Philip Yancey writes, "Only Mako Fujimura could have written this book." Truly, the book seems written by a Providence that moved Fujimura through Japan and America at significant moments in history and gifted him with particular talents and insight that allowed him to piece together the tragedy of Nagasaki and 9/11 with the fictional apostasy of Endo's Father Rodrigues and the persecution of a 16th-century tea master. "My writing will seem refractive in nature," Fujimura writes at the start of his book, preparing us for the book's layers of narrative, research, and reflection that remind us of his nihonga paintings. Because of its entangling of multiple pieces—literary and art criticism, sociological and psychological explorations of Japanese culture, and personal narrative—Fujimura's book is best read both forwards and backwards. It should not be read once and put back on the shelf; rather, it should be drunk like a tonic, like the antidote or innoculative drug that he claims Endo's Silence itself is for our culture.

Jessica Hooten Wilson is the Associate Director of Honors at John Brown University and an assistant professor of creative writing.