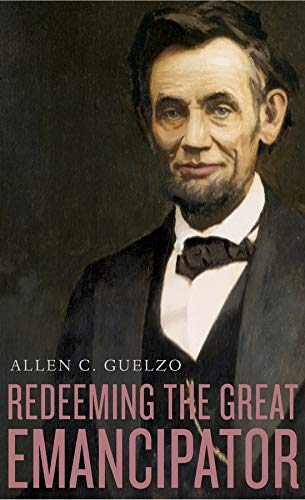 Lincoln and the Emancipation Proclamation.

In a book distilled from the 2012 Nathan I. Huggins Lectures at Harvard, the distinguished Lincoln scholar Allen C. Guelzo not only gives Lincoln's reputation its due; also, he gives the reader an informative vista outward, toward present-day American politics, from the revisionist scaffolding that is like a siege investment around the Lincoln Memorial.

As a middle-class, Midwestern white, educated in the Greek and Latin Classics at Harvard, I think I can address such politics only if I first point forthrightly into the empty chasm where my experience should be—the supreme irony being that in immediately post-apartheid South Africa I got to know black people easily and well. Some relationships were easier than others—they went all the way from mutual avowals of "God sent you to me" and goodwill that lasts to this day, to excited collaboration followed by resentful withdrawal—but they were real relationships.

I grew up in rural Ohio and never saw a black person in the flesh until I was nine—and she was an Aborigine girl walking in a public garden in Australia, at some distance from my vacationing family. I was face to face with an African American (a child my age) for the first time when I was eleven or twelve, at the Toledo Zoo; I marveled, as I shared with her some birdseed from one of those little machines, that her hands were dark only on their backs.

During my teens, when my mother was manager of the Wood County Historical Museum, she compared the numerous (and exuberantly racist) articles about blacks in archived 19th-century local newspapers to the utter blank in the early 20th century; there hadn't in fact been any blacks in the small towns since then either. A couple of dim reports of a Klan presence probably explained the change.

But there were two black kids in my high school, a tennis star and a cheerleader, children of a Bowling Green State University professor. I was far enough away from the popular crowd not to know at the time about ...