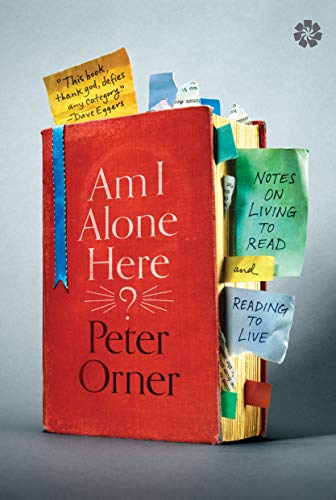 In this engaging and moving volume of what he calls "a book of unlearned criticism that stumbles into memoir," acclaimed fiction writer Peter Orner draws upon stories by various writers in an attempt to make sense of his own life. Orner reluctantly describes Am I Alone Here? as a work of "ekphrasis," in which he tries to "make some (poorer) art of other (greater) art as a means of trying to explain a few things to myself." He continues:

Stories, both my own and those I've taken to heart, make up whoever it is that I've become. I'm a Jewish kid from Chicago, but without Anton Chekhov, without Isaac Babel, without Eudora Welty, without Juan Rulfo, without John Edgar Wideman, without Gina Berriault, without Malamud, Gallant, and Dubus (the list goes on and on), I'm not sure I'd have any clue at all who I am. Yet even with them, some days, who the hell knows?

Am I Alone Here? was written amid the confusion of two particularly trying developments in Orner's life: his 2008 divorce, in the aftermath of which the essays that make up the book began to be written; and his father's 2014 death and the deterioration preceding it. The confusion of this latter development manifests itself strongly when, in his introduction, Orner articulates his sobering realization of the distinction between fiction and reality:

In the year or so after my father died, I found, for the first time in as long as I could remember, I couldn't write fiction. My father and I were never especially close, and not nearly as close as he'd wanted us to be. For years he used to call me. Three, four, five times a day, he'd call and he'd call. I'd never pick up. But somehow this not being close, at least as far as I was concerned, was a form of being close. It helped define my precarious existence. There was always this gap between us. Within the gap: a kind of love. Now there's no gap, nothing … . His sudden nonexistence left me with a blank I had no idea how to fill. Since it is my job to obliterate blankness with words, I felt especially lost. My inability to do my job … may have had to do with the fact that in many ways my father had always been a fictional character in my life. Without him, I lost my own weirdest creation. But my father's funeral in Skokie, Illinois, wasn't fictional.[1]

Orner marvels at the contrast between his former ability to "choreograph a version of my father's death" and his ongoing inability to come to terms with the real event.

Despite recognizing his own fiction's limitations, Orner throughout Am I Alone Here? paradoxically uses fiction as a vehicle by which to articulate that which he might rather conceal. Describing fiction as "something that is supposed to disrupt my life," Orner shares episodes of disruption that manifest themselves amid his deep connection with stories, fictional and otherwise, that evoke memories that often intersect with present struggles.

As might be expected, many of these episodes involve Orner's father. Orner's rereading of Breece D'J Pancake's "First Day of Winter," the story of a small, fragile family, elicits, among other things, thoughts of his weakened father "half asleep in front of the television" and of Orner's failure to visit him the last time he was in Chicago. Orner's meditations on Bernard Malamud's "My Son the Murderer" transport him to a guilt-ridden obligatory Father's Day phone call in which his newly senile father extols the relative merits of Richard Nixon. Orner's thoughts on Mavis Gallant's "In Plain Sight," a story about an unfeeling, aged writer, lead him to ponder first his father's earlier mistreatment of his own father and then his current condition as a helpless, terrified, dying old man. Orner's reflections on Saul Bellow's "The Old System," in which each Yom Kippur a brother seeks mutual forgiveness with his recalcitrant sister, provoke him to contrast Bellow's Isaac and Tina—who whimsically forgive each other at Tina's deathbed—with Orner's father and aunt (whose relationship Orner fictionally depicted in his first book, Esther Stories)—who lie in their respective graves in the family plot still unreconciled.

Coming full circle, Orner eventually discusses his own novel Love and Shame and Love, in which he "kills off" a fictionalized version of his father. Orner marvels at the contrast between his former ability to "choreograph a version of my father's death" and his ongoing inability to come to terms with the real event. "Never has fiction seemed so useless." In his concluding sketch, Orner recalls how he would "justify" ignoring his father's later efforts to reach out to him by remembering his earlier cruelty. Now Orner chastises himself for his "corrupt" attempt to mourn his father by wearily walking about San Francisco, his adopted home. "I've been trying to wander off my father's death," he admits.

Orner's ex-wife, whom he calls M, also haunts his memory, figuring prominently in several sketches. Reading Kafka's diary, Orner remembers how he and the mentally ill M returned to Prague in 2007, hoping to recapture the happiness they shared when they lived there in 1999. Their relocation accomplishes nothing. During their final night together, while she sleeps, he abandons M after one of her many paranoid manic episodes. In another chapter, while reflecting on Henrich Böll's "Parting," Orner recalls visiting M in a hospital several years later. "How's your daughter?" she asks him, referring to the baby recently born to Orner and his current partner. He tries to stop her, but she persists. Their conversation reveals her lingering paranoia, but one senses he has never gotten over her. "I worry about you. All the time," he says. They touch fingers briefly as they clumsily share a brownie before visitation time ends. In his penultimate sketch, Orner discusses the Prague writer Bohumil Hrabal's Too Loud for Solitude, a novel about reading and memory "that so entangles hope with despair that you can't tell one from the other." Pondering Hrabal's book, Orner recalls his 2014 visit to Prague: "I'm not sure what I was looking for, but I went wandering in the neighborhood M and I had lived in fifteen years earlier."

The wanderings Orner describes in his final two sketches suggest a guarded spiritual restlessness and longing that manifest themselves periodically in his memoir. At one point, Orner mentions his perpetual "search for the one book that will save me from myself." While discussing Ahab in Moby-Dick, Orner turns his thoughts to the June 2015 Charleston church shooting. He notes that the killer had attended the church's Bible study on the parable of the sower. Orner quotes from Jesus' words in the parable and writes, "It all depends on how people listen." He also describes his visit to a Trappist abbey where he reads Francois Mauriac's Life of Jesus. He tells a monk, "I seek discipline … And some sort of spiritual enlightenment that isn't, you know, too religious. But I'm open. At least to a degree."

Perhaps most striking is Orner's discussion of William Maxwell's "With Reference to an Incident at a Bridge," a tale of youthful transgression and lingering guilt. It reminds Orner of his junior-high mocking of an overweight classmate and of his childhood rabbi's admonition at Yom Kippur: "You want atonement? For that you must go and ask the forgiveness of those you've sinned against. Start tonight." Orner remarks sadly that "it is probably too late" to begin the "full-time forgiveness operation" he ought to pursue. Notably, he does not ask M's forgiveness when he visits her. One senses that, amid his various stories and recollections, Orner—like, perhaps, his father before him—longs for forgiveness but stays at a distance.

Overall, Am I Alone Here? is effective and praiseworthy on many levels, not the least being its astute and deeply personal interaction with stories of various kinds; its exemplification of the value of stories; and its reminder that stories, properly read, can disrupt us, eliciting stories of our own that would otherwise remain unacknowledged and untold.

1. I discuss Orner's depiction of Phillip, a character based on but distinct from Orner's father who appears in several of Orner's books, in "Compassion for Difficult Fathers" (Books & Culture Online). As I note in that article, Orner spoke at Calvin College's 2014 Festival of Faith & Writing in the immediate aftermath of his father's death.