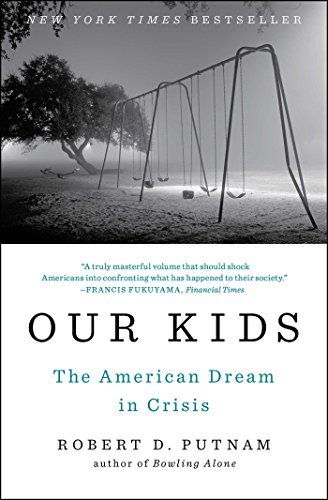 Putnam's focus on socioeconomic status dominates his analysis, so he only occasionally considers the role of race. Here his voice becomes more optimistic as he offers hopeful data that black children face fewer barriers to educational and economic success than their parents and grandparents did. Gaps between racial groups are indeed narrowing on many measures, if slowly. But racial discrepancies remain and deserve further analytical attention. William Julius Wilson commented to Putnam in a panel at the American Enterprise Institute that "if I have one quibble with your book, I don't think you devote sufficient attention to the continuing interracial disparities." The book would be more powerful if it delved deeper into the underlying causes and continued repercussions of racial differences on a wide range of factors that contribute to social mobility.

One thing Putnam makes clear is that although racial gaps are narrowing, class gaps are growing within each racial group. The book's interviews in particular reveal that class is supplanting race when it comes to inequality of opportunity. Housing segregation is increasingly predicated on social class rather than race, creating what Putnam calls a "perception gap": "[F]ewer and fewer successful people (and even fewer of our children) have any idea how the other half lives." Furthermore, he argues that the thickening hedges between the path to success and the path to failure are eliminating cross-traffic between the two.

Liberals and conservatives alike will find much to agree with and much to dispute in Putnam's final analysis. Both outlooks are rooted in important truths and, despite what many want to argue, are not mutually exclusive. Those on the left are correct to highlight structural and institutional barriers impeding social mobility. Safety-net programs are essential, as are efforts to challenge structures and systems stacked against the poor and less educated. But those on the right are also correct when they point to the importance of hard work and individual choices. Factors like marriage and out-of-wedlock births matter; some choices open doors even as others close off opportunities. If one wants to play the blame game, Putnam's account of declining opportunity makes for tough fodder as it highlights the failures of both the rich and the poor.

It's easy to raise a battle cry about wealth inequality and the 99 percent. But it is much harder—and much more crucial—to take a close look at the growing disparity in opportunity between large swaths of the American public. Generations are trapped in vicious cycles that need to be reversed. The factors most likely to perpetuate inequality of opportunity are deeply entrenched and vexing to address.

No single political party or group of actors can effectively reverse these patterns alone. A complex web of economic and cultural shifts has contributed to the problem, and the paths to solutions will be multi-faceted and highly demanding. Any way forward will require sacrifice, a concept all too absent in contemporary culture. Who better to model a way back toward robust community and genuine care for others beyond our immediate circle than the church?

Yet comments Putnam has made in other venues reveal a particular blindness to the depth and scope of work being done by "organized religion." In an interview with the Washington Post's Michelle Boorstein, Putnam said that faith leaders are "missing in action" in the fight against inequality. He went so far as to say that the "fact" that people of faith spend all their funds fighting abortion and homosexuality rather than relieving poverty "is the most obvious point in the world." In saying so, he ignored not only accounts from his own book but also years of philanthropy data that show Christian organizations spending billions of dollars annually on global and domestic poverty relief.

Likewise, careful reading of Our Kids reveals that while systemic solutions to inequality of opportunity are not forthcoming, some positive interventions are taking place in the lives of individual youth and families. When Putnam's interviewees do reference help received from churches, teachers, or others, he tends to treat these occurrences more as strokes of fate than as the result of deliberate actions by people of faith or others seeking to do good.