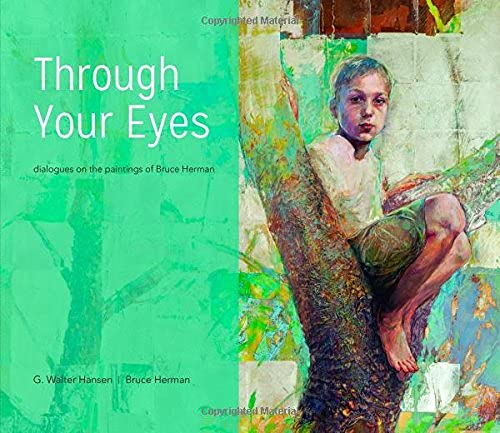 There is a loose genre of images that depict people looking at things together. They are shown sharing a visual experience, and our looking at them can be a kind of visual eavesdropping, as their gaze informs our gaze. There is a special subgroup in this genre where we see people—artists, critics, patrons, and friends—together in a studio. They are usually looking at and discussing someone's work, which may not be visible to us. An example is the French painter Frederic Bazille's painting of his studio from 1870. It shows him standing beside an easel with one of his paintings on it, in discussion with two people. One is known to be Manet, and the other is thought to be Monet. The painter Renoir and the critic Emile Zola are seen conversing a short distance from the easel, and their friend the musician Edmond Maitre is across the room seated at a piano. It is an informal scene of conversation, friendship, and artistic achievement.

What is palpable in such images is the feeling of the special companionship found as people share common visual experiences, savoring them, analyzing them, and perhaps arguing over some point of craft or meaning. The gestures, gazes, and little telltale attitudes expressed through a body's posture are indications that ideas are being exchanged in the presence of things passionately cared for. They create an imagery of visual engagement and pleasure, which is an intriguing subject—at least for artists.

What is not clear from these paintings themselves is the substance and content of the conversations they depict. Really, everything from the identification of the people depicted to the social and philosophical substrate that an image rests upon is not necessarily in a picture. Where do we find that knowledge? Most often we find it in books.

There don't seem to be many literary equivalents to the kind of companionship of seeing I've been describing, where a book's text is given over to friends discussing and savoring through print ...