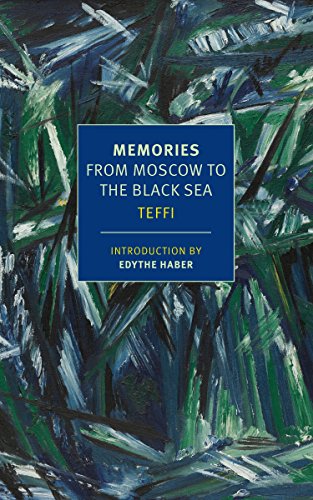 A Satirist in Exile

In the summer of 1917, just months before the Bolsheviks shut down the organs of decadent culture, the magazine Russian Word published an essay entitled "Deserters" by Teffi, one of its most popular writers. In it she exhorts her fellow aristocrats and intelligentsy not to abandon Russia in her hour of revolutionary upheaval. She acknowledges that the newly awakened peasants and workers will no doubt commit outrages after centuries of being "stupefied with vodka, crushed by lack of rights, by illiteracy, poverty, superstition, and hunger," but their victims have a responsibility to see the country through. "May each one of us be able to say: 'My forces were weak and small, but I gave of them totally. And I did not renounce and did not flee. I was not a deserter!' "

Teffi (Nadezhda Alexandrovna Buchinskaya) had plenty of time to contemplate the irony of these words during three decades of exile, for two years after that essay she joined the three million "deserters" who escaped Russia in the wake of its civil war. From Moscow Teffi fled first to Kiev, then to Odessa, and finally to Paris, where most White émigrés of her class ended up. In Russia, she had married young, given birth to three children, and then left her husband and children before she turned thirty, making a success of her career as a writer. In exile, she had a more difficult time building a new life than those whose skills were more adaptable or who could perform the manual labor that France wanted from its immigrants, to make up for the generation of working men it had lost in the trenches. Her only income came from the dozens of short stories she wrote for the Russian-language émigré press. She died in 1952 without seeing Russia again.

But all of this lay in the future when the first installments of Memories were published in 1928. At that point, many émigrés could still think of their flight not as desertion but ...