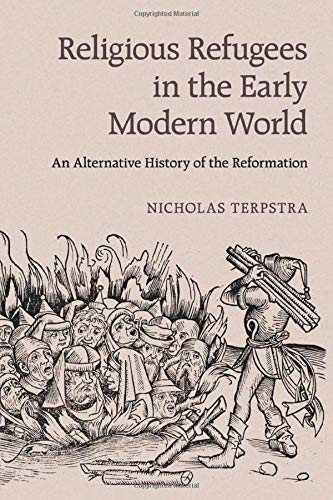 My family history reads like headlines: Thousands of Christians displaced from their homeland by an expansionist Islamic state seeking to set up a worldwide caliphate. That's what happened to my ancestors in the 1460s and '70s. The pressure came not from ISIS/ISIL but from the Ottoman Empire. The land they left was not Syria but Albania. And their destination was not Germany but Sicily. Still, it feels remarkably contemporary.

University of Toronto historian Nicholas Terpstra points to the late 15th century—when the same powers that welcomed my ancestors also purged Iberia of Muslims and Jews—as the beginning of the Reformation. It wasn't Luther's cheeky challenge to Rome, but mass migrations of religious exiles that changed the face of Europe.

For Terpstra, the real drama of the Reformation is not built on theological disputes but on a fear of contagion and the practice of socio-political preventive medicine. The cities of medieval Christian Europe aspired to be unified bodies of virtuous believers whose families and guilds thrived under the Virgin Mary's protection. Civic religion bound the community together by blending what we now consider life's secular aspects with religious festivals and the communal memory of local saints and martyrs. Medieval city-states made little distinction between the body politic and the body of Christ. The health of both bodies demanded a (metaphorically) medical solution: they had to protect the body from any source of contagion.

In the 15th and 16th centuries, a threatening shadow crossed this Christian landscape: the aggressive expansion of Islam, which conquered the seat of the Christian Byzantine Empire in 1453 and unsettled Europe's patchwork of kingdoms and city-states.

Alfonso the Magnanimous—king of Aragon, Sicily, and Naples—supported the Albanian general Skanderbeg, who successfully resisted the Ottoman expansion for 25 years. In return, the Albanians helped Alfonso put down armed rebellion in Naples. Alfonso and his successors prosecuted a war against Islam in their own territory. In 1492, Alfonso's nephew Ferdinand made a generous treaty with the conquered Emirate of Granada, creating a framework for coexistence. But high-handed clergy provoked a Muslim rebellion, and Ferdinand gave the Moors an ultimatum: convert to Christianity or leave.

If Muslims were a political threat, Jews were perceived as a contagion. Jews could infect the new Spain with a spiritual sickness. The right treatment was an emetic: Spain had to vomit up her poisonous Jews. And so, in the year that Ferdinand made a treaty with the Muslims, he expelled all Jews from Iberia.

Terpstra reports that the cities that received religious refugees and found paths to peaceful co-existence (though not toleration in the modern sense) prospered.

Venice treated its Jews better. In 1516, it quarantined them in the first-ever Jewish ghetto. What began as a way to protect Jews from hostile soldiers soon became a means for Venetians to isolate themselves from a source of contamination. By 1621, Venice also created a Storehouse of the Turks, to quarantine merchants arriving from Ottoman lands while also serving as hostel, warehouse, and market. As a city-state devoted to art and commerce, Venice was filled with merchants and artists, printers and writers. To expel foreign élites with their foreign religions would undermine Venetian prosperity. Thus it chose quarantine over amputation.

Terpstra documents the Jewish and Muslim migrations that were triggered by Christian fears. Many Jews went to Salonika in the 1490s. Sultan Bayezid II invited them, and within a couple of decades the city's population had tripled to 30,000, with half the population being Iberian Sephardim. These Jews brought trading connections and capital that transformed Salonika into a wealthy port.

Nearly 10,000 Iberian Muslims went to Algiers in North Africa. These Iberian Moors brought with them strange customs that prevented their mixing with local Berbers and Bedouins. A large number of Muslim converts from Christianity also arrived. The converts' cultural adaptability made it possible for them to integrate and take key posts in government and the military.

These Jewish and Muslim migrations were both religious and ethnic. But the birth of Protestantism created a different reality. Both John Calvin and Martin Luther became religious refugees—victims of the same purifying impulse that had expelled Jews and Muslims. Fortunately, the shifting political realities of their time gave them shelter.

These new religious controversies created a market for polemic and for publishing. The years 1520-1529 saw "a tsunami of popular religious titles," with many of the books and pamphlets coming from the pen of Luther—and the vast majority of those were polemics. It was not so much that the printing press enabled the Reformation, as conventional wisdom has it, but that the Reformation created a market for printers, Terpstra argues.

This worked to the disadvantage of Rome. Although key publishing centers Europe were in Catholic cities—Venice, Paris, Cologne—Catholic authorities were opposed in principle to lay discussion of doctrine. Thus Catholic polemic did not flourish.

After that wave from Luther's pen, publishing continued to be overwhelmingly religious, but the tone shifted from polemical to devotional—volumes of sermons, vernacular Bibles, devotional commentaries, and catechisms. Catechisms and creeds, of course, had been around since the early years of Christianity, but until the Reformation, these were largely aimed at literate clergy. Now catechisms became public documents that allowed each new religious community to spell out its beliefs about how one belonged (baptism or profession of faith), how one experienced the divine presence, and who or what served as a source of religious authority. There came a quick succession of new creeds: the Anabaptist Schleitheim Confession (1527), the Lutheran Augsburg Confession (1530), the Anglican Thirty-Nine Articles (1563), the Calvinist Belgic (1561) and Helvetic (1566) Confessions. Each of these communities produced teaching materials that allowed parents to teach the faith to their children. Catholics, at first, resisted promulgating any new statement of faith, but by 1564, Pius IV issued a new profession of faith to sum up the responses of the Council of Trent to the rapid fracturing of Christendom.

While these new confessions were supposed to be spiritual documents, they everywhere "became standards of citizenship" and instruments of exclusion. Christian Europe, though more fractured than ever, had not yet lost the idea that a society should be religiously homogeneous in order to flourish politically and economically. Thus Geneva welcomed religious refugees whose views were agreeable to its Calvinist confession, but (as the notorious burning of Michael Servetus shows) mere disagreement with Catholic teaching did not create fellow feeling. English proto-Puritans were welcomed, but other religious outcasts were forced to move along.

Activists, such as the volatile preacher Martin Luther, the Anabaptist prophet Jan of Leiden, or the Grand Inquisitor Cardinal Ximenes, "framed the legitimating discourse that preceded and incited violence, or that might even be used to justify or explain violence which had just happened." Their rhetoric seems to presage the divisiveness that has invaded American politics, "as friends are described as purely good and enemies as purely evil. This kind of black and white contrast," writes Terpstra, "was the staple of popular religious rhetoric of the period, and did much to shape popular attitudes to religious others."

The Radicals, after their failed millennial kingdom in Munster, were forced to find new homes—small, rural, voluntary, and self-sufficient communities in Moravia, Poland, Russia, and Ukraine. And as new groups multiplied over the next few centuries, migrations to Europe's more hospitable cities (Amsterdam, for example) were followed by visions of new world cities set upon a hill. But even these used their newly minted confessions as engines of exclusion and created their own religious refugees.

Terpstra reports that the cities that received religious refugees and found paths to peaceful co-existence (though not toleration in the modern sense) prospered. Amsterdam and Salonika are prime examples. (The bitter fate of Salonika in the 20th century lay in the distant future.) One of my favorite tourist sites in Amsterdam is the "secret" Catholic church known as "Our Dear Lord in the Attic." Between 1661 and 1663, when open Catholic worship was still illegal in Amsterdam, the prosperous merchant Jan Hartman joined three adjacent attics to create a narrow nave with two balconies that would seat 150 people. It must have been an open secret. The construction activity itself would have made the project obvious. Amsterdam's Protestant city fathers developed a strategy of "tacit toleration" for Catholics, Jews, and Anabaptists. As long as they didn't practice their religion too publicly, difference was tolerated, and Amsterdam flourished culturally and economically.

Cities that were devoted to purity, like Basel, Munster, Geneva, and the Massachussetts Bay Colony, closed their doors to refugees who were not like them, and thus became monocultural and "were left with smaller populations and economies." Creative misfits were expelled and brought their new energies to other places.

The United States, France, Germany, and England are all struggling with questions of cultural and (to a lesser extent) religious identity as floods of migrants from the world's hot spots knock on their doors. Terpstra's account of early modern Europe suggests a calculated tilt in favor of exploiting the opportunities for economic and cultural vitality these migrant populations offer.

David Neff is the retired editor in chief of Christianity Today magazine.