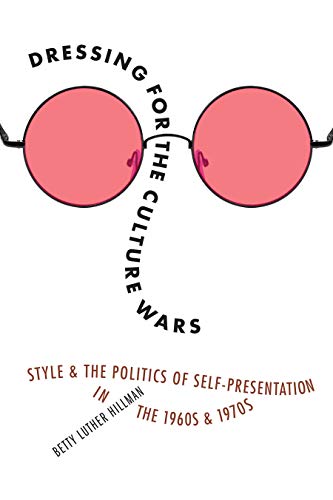 Dressing for the Culture Wars: Style and the Politics of Self-Presentation in the 1960s and 1970s
Betty Luther Hillman
University of Nebraska Press, 2015
278 pp., 40.0

You Are (Not) What You Wear

Clothes and the culture wars.
March/April 2016

In Henry James's Portrait of a Lady, idealistic Isabel Archer gets into an argument with her more worldly companion, Madame Merle, about clothes. Madame Merle is of the opinion that, when you get down to it, people are their clothes. This doesn't sit well with Isabel, who objects: "I don't know whether I succeed in expressing myself, but I know that nothing else expresses me." When Madame Merle points out that Isabel takes some care over her appearance, Isabel says she is living under a standard imposed on her by society. Madame Merle asks Isabel if she'd prefer to walk around naked. So ends the conversation.

Madame Merle turns out to be a conniving backstabber, but her opinion has mostly carried the day: fashion as self-creation sells products on websites from Ask Men to Man Repeller. The last two sweaters I've purchased were called "The Audrey" and "The French Girl." Dress for the waif-like self you want! But though I bought the sweaters, I don't buy the argument. Clothes may hold many meanings, but they signal membership (whether real or aspirational) more than they express or generate a self. In this sense, dress is always political. Your black turtleneck indicates that you consider yourself an intellectual; that suit is a lawyer's; this is the habit of a nun; my long wool skirts told my classmates in college that I was "like, super-religious." Or, if I were a young man in the '60s with long hair, you could reasonably assume that I opposed the Vietnam War.

For dress can be political in the partisan sense too, though it hasn't functioned this way in American politics for some time. Documenting some of its political past is Betty Luther Hillman's task in Dressing for the Culture Wars: Style and the Politics of Self-Representation. As Hillman records, for some, clothes could be a way of embodying opposition to societal norms. But for others, clothes were a way of reassuring political opponents. While some young men were growing their hair long to protest the Vietnam War, an anti-war politician like Eugene McCarthy was making sure his volunteers were getting "clean for Gene" by cutting their hair and keeping clean-shaven.

Not every fashion trend in the '60s and '70s was meant to overthrow some corrupt social value, but even apolitical fashions could become loaded with political significance. The miniskirt became a symbol of sexual liberation. Unisex pantsuits and Nehru jackets seemed to herald the arrival of an androgynous age. So (in some eyes) did the Beatles: "Now come the Beatles," Hillman quotes one reporter as saying, "the bushy-haired boys whose sex is not immediately apparent."

Meanwhile, various movements argued over whether it was better to push the envelope through one's clothes or use clothes to signal a desire for respectability. Black civil rights organizations divided over natural hair. For some gay rights groups, drag was a tool to undermine gender norms; for others, it was holding the movement back. "Each of us has to decide just what kind of image we will present to the photographers during the Gay Day parade," Harvey Milk warned in an editorial. Though he "did not explicitly single out drag queens," Hillman notes, "his message was implicitly understood."

Feminists, too, were split. Certainly, no use of clothing for political protest is more famous than the protest of the Miss America Pageant of 1968, where bras (along with high heels and copies of Playboy) were tossed in the trash (and, in legend if not in reality, burned). But it was a problem if feminism seemed to be more concerned with clothes than with achieving legal gains for women. It was also a problem, however, if feminism led some women to reject beauty norms completely: Betty Friedan worried in 1969 that some young feminists "were trying to push [the message] … that to be a liberated woman you had to make yourself ugly."

For some women, though, the argument that you did have to make yourself ugly was persuasive. Hillman includes a photo spread from Lesbian Tide, showing two women, before feminism and after. Before feminism: sexy clothes and makeup. After feminism: sensible pants and loose jackets. Before: individuality is repressed; after: individuality restored.

Even as some of the arguments documented by Hillman induce a cringe—"long hair is our black skin," says one hippie—there's something undeniably winning about this whole scene and the seriousness of these arguments. But the image that really ends up summing up these debates isn't drag queens, getting clean for Gene, or the comfortable women of Lesbian Tide. And it's not, much as I regret it, the bra-trashers.

Instead, the really representative picture is of a protest led by FADD (Fight Against Dictating Designers). A woman has just cut off the bottom of a below-the-knee skirt to create a miniskirt. This was a protest not about any of these political questions, but about consumer choice: designers wanted the miniskirt out, and women still wanted it in. (If the slogan "Dictating Designers" seems a bit overstated, remember that before the miniskirt there was the sack dress.)

While I was reading Dressing for the Culture Wars, I was also reading Women in Clothes, a collection of interviews and essays spearheaded by the Canadian novelist Sheila Heti. (Some of the answers to the survey are collected in the book, while others are hosted on the book's website.) To read these accounts from disparate women is to be reminded, if anyone was in doubt, that our relationship with clothes remains fraught—but not quite in the same way that Hillman documents. One of the survey questions is "do you address anything political in the way you dress?"; looking through the answers, it becomes rapidly clear that the answer, for many, is no. Or, to quote one answer: "Not since the 60s." (But issues involving clothes for Muslim women, where political and religious concerns are intertwined, are increasingly prominent in North America as well as in Europe.)

Though Hillman focuses on tensions between respectability and radicalism, there's another tension at work in these arguments about clothes, and it has to do with that idea of clothes as a form of self-expression. The fashions themselves became political actions, creating selves directed toward better ends. But anyone can wear pants, give up makeup, grow out their hair or cut it short. And anyone did.

Whether the fashions Hillman discusses were political intentionally (like long hair) or accidentally (like the miniskirt), all ended up becoming simply one choice among many. Young men who went to court for the right to wear their hair long would see long-haired men allowed into the kind of high-end hotel that had once kicked them out the door. The look had become fashionable. Its meaning, accordingly, changed. For unless clothing is tied to the kind of membership that can be granted or revoked—such as (for instance) that nun's habit, mentioned above—its meaning is ultimately in the hands of other people, not in yours. That is the limit of any self-expression undertaken through fashion, whether you're trying to harness it for political ends or just to impress others.

In the end, long hair on men could not express a coherent position. It became fashionable and then went out of fashion again. Unisex fashion, too, has mostly fallen by the wayside. And, as it turns out, Betty Friedan need not have worried that women would embrace ugliness in the name of feminism: the miniskirt endureth forever. There's something inevitable about the way that everything eventually became a question of choice and self-fulfillment. Clothes simply don't have that kind of political or moral power. But there's something a little sad, too.

Clothes, like food and furniture, represent a compromise all of us must make with the world. Since you have a body (prone to chill, hunger, and weariness), you will need to care for it (with a coat, a little soup, and a mattress). This will end up involving some degree of taste and the more-than-purely necessary. Taste ends up involving morality; other people end up involving politics. That's even before you get into the material side of clothes—where they come from, who made them, how much those people were paid and under what conditions.

The more they are contemplated, in fact, the more political and moral problems clothes generate. All the same, you have to wear something. Unless you supervise every part of your clothes from planting the cotton to sewing the seams, you can't opt out. That's clothes.

Even if the activists in these movements were mistaken about the self-fashioning power of their clothes, at least they were trying to fashion a self that was directed toward a kind of virtue. And there's always something a little tragic about watching any idealistic cause—no matter how mistaken—become simply another way to sell you something. Clothes can't mean anything, it's true. But wouldn't it be nice if they did?

B. D. McClay is associate editor at The Hedgehog Review.