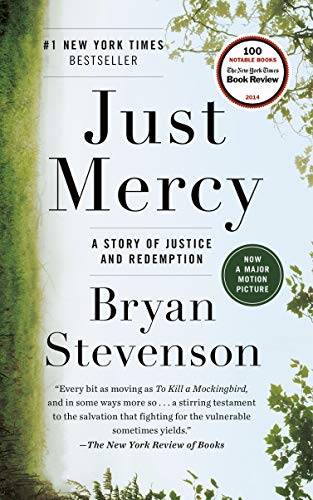 Just Mercy: A Story of Justice and Redemption
Bryan Stevenson
One World, 2015
368 pp.,

When I was an undergraduate, I had a conversion experience that turned my life around and shifted my career goal away from bioengineering to pastoral ministry and, later, teaching literature. One influence that precipitated the conversion came from a cassette tape someone had suggested I listen to. It was a message by Tony Campolo, delivered at a conference for children's pastors, about the way postmodernism was changing our approach to Christian education. His last point emphasized relying less on technique and technology and more on the power of the Holy Spirit to release visions and dreams in young people, and he told a story to drive it home. One of his students, Campolo recalled, went on from what was then called Eastern College in Pennsylvania to graduate from Harvard Law School near the top of his class. But rather than take a high-paying position after graduation, he lived off donations in Montgomery, Alabama while defending people on death row. That example, along with an English course I took on prison autobiographies, helped to make mass incarceration a subject close to my work in the ministry and at the university.

Over the years, while preaching sermons and teaching courses on the topic, I occasionally wondered what happened to that student—whether he continued to defend the poor. Fifteen years went by, and then I came across his name on a TED video about mass incarceration: "Bryan Stevenson: We need to talk about an injustice." It was a moving speech that managed to avoid the debilitating effect such a topic can sometimes have on audiences. In fact, Stevenson's talk was so empowering that it garnered "one of the longest and loudest standing ovations in TED's history" and in the days after raised over $1 million toward ending excessive punishment of minors in adult prisons.[1] In 2015, Stevenson argued successfully before the US Supreme Court that mandatory life sentences without parole for minors qualify as cruel and unusual punishment.

A recipient of the MacArthur "Genius" Award and the Olaf Palme Prize for his work as founder and Executive Director of Equal Justice Initiative, Stevenson followed his TED talk with the publication of his first book, Just Mercy. It begins in 1983 recounting his experience as a law student and ends with the death in 2013 of his most famous client, Walter McMillian, whose case provides the narrative thread throughout the book. Whereas Michelle Alexander's The New Jim Crow, another bestseller on the same subject, puts forward a provocative thesis focusing on the history and structure of mass incarceration, Stevenson's book is a deeply personal account. If Alexander's stated purpose is to equip her readers with the necessary facts to make a case against mass incarceration, Stevenson's aim is to tell us how he's made such a case in the last 30 years. It's not difficult to take issue with this or that part of Alexander's argument, which many critics have done. But it's hard to imagine anyone not being moved to compassion by the stories of wrongful convictions, the plight of the mentally ill, and the vulnerability of women and children in parts of our criminal justice system. Prison reform in recent decades has been on the progressive political agenda. But as Eli Lehrer has recently written in National Review and for The Heritage Foundation, it seems some conservatives are prepared to reconsider the issue too. If they are, I haven't found any citing Just Mercy to support their argument just yet. But I don't think it's entirely inconceivable that advocates on both the right and left might find useful material from the book, since Stevenson stakes his claims on moral rather than partisan grounds.

Just Mercy takes its epigraph from Reinhold Niebuhr: "Love is the motive, but justice is the instrument." And though Stevenson does not cite every biblical allusion, it is unmistakable that he is driven by the prophetic call to act justly and to love mercy and to walk humbly before God. When he writes about what he's learned from his experience, he says, "mercy is just when it is rooted in hopefulness and freely given. Mercy is most empowering, liberating, and transformative when it is directed at the undeserving. The people who haven't earned it, who haven't even sought it, are the most meaningful recipients of our compassion." In contrast, "fear and anger are a threat to justice; they can infect a community, a state, or a nation and make us blind, irrational, and dangerous." The strength of these conclusions comes not from some groundbreaking new moral lesson, but rather from the credibility and persuasiveness Stevenson and McMillian earn through their shared story. Here is a book with a clear flesh-and-bones testimony about what it means to persist in the struggle for hope and justice.

Walter McMillian spent six years on Alabama's death row before his conviction was overturned in 1993. The details of the case make it hard to understand how far officials were willing to go to maintain his guilt. But it's the way Stevenson shapes the story that makes the narrative compelling. A mixture of Harper Lee's To Kill a Mockingbird and W. E. B. Du Bois's The Souls of Black Folk, from both of which he draws frequently, Stevenson relies upon memory instead of legal argumentation, and he turns to dialogue and flashbacks to heighten the dramatic arc of the story. Key dates are given, but more often he prefers vague references to "one evening" or "months earlier," a strategy that makes all the events seem like they happened recently. The result is that even when McMillian is finally freed, the reader is left with the sense there are others like him still in prison—the task is far from being completed. At the end of this book there is hope, but there is no room for a triumphant standing ovation.

As McMillian's case unfolds across eight or nine chapters, Stevenson intertwines stories of other cases, so that all the odd-numbered chapters are devoted to McMillian while the even-numbered chapters include stories about the women, children, and the mentally ill or disabled whom Stevenson has represented over the years. Of course, not all of Stevenson's clients are as innocent or sympathetic as McMillian. Herbert Richardson, for example, was a Vietnam War veteran who unintentionally killed a ten-year-old girl when his attempt to win back his girlfriend by saving her from a bomb—of his own making—exploded in the girl's hands. Despite "compelling mitigating evidence," I can imagine some readers thinking it is justified when Richardson is executed. But reading Richardson's story in between chapters about McMillian can have its own mitigating effect, so that when Stevenson writes the following passage at the end of Richardson's story, we really have to think about the differences between McMillian and Richardson and about whether those differences justify capital punishment:

The next day there were articles in the press about the execution. Some state officials expressed happiness and excitement that an execution had taken place, but I knew that none of them had actually dealt with the details of killing Herbert. In debates about the death penalty, I had started arguing that we would never think it was humane to pay someone to rape people convicted of rape or assault and abuse someone guilty of assault or abuse. Yet we were comfortable killing people who kill, in part because we think we can do it in a manner that doesn't implicate our own humanity, the way that raping or abusing someone would. I couldn't stop thinking that we don't spend much time contemplating the details of what killing someone actually involves.

For those of us unfamiliar with what that actually involves, Stevenson includes those stories too, of last moments and the people involved after judges and juries make their decisions and go home. In the end, Stevenson tells us, "the death penalty is not about whether people deserve to die for the crimes they commit. The real question of capital punishment in this country is, Do we deserve to kill?"

Even if Stevenson were to succeed in convincing people that the answer to the last question should be no, he wouldn't revel in winning the argument. No reader will think Mr. and Mrs. Jennings, a white Methodist couple in their seventies, took the easy way out when they all but adopted Charlie, a 14-year-old African American boy who was sexually abused while detained in adult prison for shooting his mother's violently alcoholic boyfriend. When Stevenson tried to warn the Jennings that helping Charlie might be exceedingly difficult, Mrs. Jennings replies, "We've all been through a lot, Bryan, all of us. I know that some have been through more than others. But if we don't expect more from each other, hope better for one another, and recover from the hurt we experience, we are surely doomed." Again and again, Stevenson shows how doom can be avoided when compassion and mercy are the driving forces of justice. When that happens, even a prison guard with a Confederate flag tattoo is able to find some common ground with a disabled black inmate through their shared experience in the foster care system.

Reading Just Mercy reminded me why this subject has been such a deep source of conviction ever since my conversion. On the surface, my life story couldn't be more different from those told in this book. But something resonates deeply with me and takes me back to my encounter with the Gospel when Stevenson writes, "We are all broken by something. We have all hurt someone and have been hurt. We all share the condition of brokenness even if our brokenness is not equivalent" (emphasis mine). What Stevenson calls "our shared brokenness" is what ultimately connects all of us despite our differences. When that becomes our common ground, no one can be immune to the cry for just mercy:

We have a choice. We can embrace our humanness, which means embracing our broken natures and the compassion that remains our best hope for healing. Or we can deny our brokenness, forswear compassion, and, as a result, deny our own humanity.

Tae Sung is assistant professor of English in the Online and Professional Studies Division at California Baptist University.