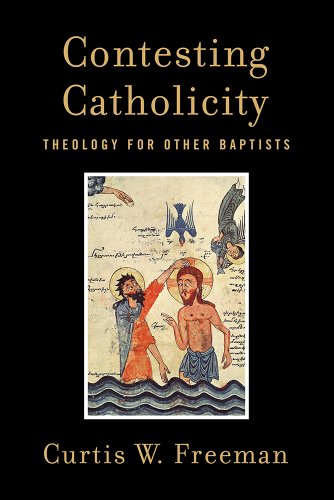 In the mid-20th century, there was perhaps no more prophetic figure within Baptist ecclesial life in America than Winthrop S. Hudson. Hudson, who served as James B. Colgate Professor of the History of Christianity at Colgate Rochester Divinity School, sensed an unease among Baptists in the 1950s that pointed toward an uncertain future. Noting that Baptists were not heirs of a uniform ecclesial tradition but a variegated one, Hudson argued that it was important to "reduce the confusion that frequently results from an indiscriminate appeal to what is considered to be historic Baptist doctrine and practice."[1] Arguments over "the" Baptist tradition, he saw, would be ultimately inconclusive, but he also foresaw the increasing fragmentation of Baptists in light of a growing emphasis on the individual believer as an autonomous interpreter of Scripture. Such fragmentation was in no small part due to a deep tension between Baptist commitments to Scriptural authority on one hand and freedom of conscience on the other. While Hudson wrote with an eye upon Baptist trends in the American North, his words fittingly described the American South as well, for while the division between fundamentalists and modernists had been playing out in the North during his day, those northern battles would be a harbinger of other things to come, and a distinctive but nonetheless eerily similar conflict would divide Baptists of the South a few decades later.

These battles did little to edify Baptist life but rather, in both North and South, led to a hardening of positions that left little room for theological nuance or ecclesial compromise, the edges pushing out the center. On one side stood the conservatives, those who stressed the inerrancy of Scripture and stood for a timeless orthodoxy. On the other side stood the progressives, those who sought to communicate the Gospel with relevance to the modern world, though in the later southern battle, such were more concerned with protecting individual conscience against heavy-handed conformity than with accommodation to modern culture. While the former conservatism moved ever towards a staid and bellicose fundamentalism, the latter tilted ever more toward liberalism that eviscerated any remaining confessionalism, certainly in the North, though in a more moderated form in the South. In Contesting Catholicity, Curtis W. Freeman sets this history within the larger context of the peculiarly American phenomenon of theological and ecclesial polarization between such fundamentalism and liberalism. His well-told narrative of Baptist trajectories as a microcosm of a larger American Protestant story deserves to be read widely not only within but also outside Baptist circles.

Dissension was never entirely absent from Baptist life, of course, and predated its appearance on American soil. Even in the beginning, Hudson noted, there was a division between those Separatist Baptists for whom the Church of England was a false church that required absolute rejection, and those non-Separatist Baptists who, while insisting on a different form of worship and practice over against the established church, nevertheless did not renounce the latter as no church at all. Freeman stands firmly in this latter camp and seeks to enlarge it by sketching a theology for those he designates as "Other Baptists," a term not so much theological as diagnostic and therapeutic. "Other Baptists" are those who reject both sides of the modern divide, and Freeman's proposal seeks to set itself over against the seemingly exclusive alternatives of later Baptist battles with a call for, in the words of Hans Frei, a "generous orthodoxy."

Against what he takes to be the theologically barren and ahistorical positions of both fundamentalism and liberalism, each ironically resting upon a similar philosophical foundationalism, Freeman proposes a "contesting catholicity." This vision for Baptist theology and ecclesial life upholds Baptist distinctives but at the same time sets them within the framework of the universal church and emphasizes shared ecumenical convictions as much as those that mark Baptists' unique church identity. Well aware of Baptist multigenesis, and thus of the reality that past sources can always provide available stones for the grinding of different contemporary theological axes, Freeman nevertheless makes a strong case for the early English Baptists' commitment to seeing themselves as part of the church universal, though he contends that what is finally at stake in his project "is not a quest to determine who the real Baptists are or were, but rather an attempt to imagine how Baptists might understand themselves in continuity with historic Christianity." The Baptist story is that of "a community of contested convictions within the church catholic."

Freeman is insightful in his diagnosis of the problems plaguing much of contemporary Baptist life, particularly its penchant to undercut communal values and sacrifice a shared confessional heritage in an effort to uphold individual autonomy or, as its alternative, narrow authoritarianism, each based upon simplistic shibboleths. He also argues persuasively that neither of the two dominant models of much of Baptist life can provide a rich enough ecclesial and theological existence for the future. What binds fundamentalists and moderates together is a deep distrust of the larger church's past and a penchant for the privatization of religion, as well as a proclivity toward the theologically trite and barren. For Freeman, as noted above, what also binds both these bitter rivals is their deep indebtedness to the individualism, voluntarism, and foundationalism of modernity, such that, despite their apparently irreconcilable differences, they are not only deeply alienated spouses but also kissing cousins.

Freeman admirably refuses to treat fundamentalism and liberalism simply as stereotypes, instead examining their real historic trajectories in Baptist theology and history. The research behind the book is staggering, drawing upon sources deeply buried in the Baptist past and upon others more recent that appear on the surface as trivial episodes of church life but which Freeman mines with skill and intensity to bring out rich dividends not only for historical recovery but theological reflection and argumentation. He possesses a rare gift for taking events of apparently insignificant and parochial consequence in the lives of particular persons and local communities and in turn working them up into expositions of and commentary upon much more wide-ranging and expansive ecclesial trends and significant theological questions in Baptist life. This gift for the biographical has evidently been sharpened by Freeman's own autobiographical narrative of disaffection and disillusionment with larger Baptist existence and its at times schizophrenic identity. In both his gift and his discontent, he therefore stands as a successor to James William McClendon, Jr., one of the heroes of Freeman's narrative, a Baptist who rejected and transcended the familiar Baptist battles. Reading this book, I could not help but think that Freeman's project marks a new day for a Baptist theological program of ressourcement and aggiornamento in America. Such terms are doubly appropriate because of Freeman's ecumenical convictions, which compel him to balance unique Baptist gifts with a serious acknowledgement and appreciation for a shared Christian inheritance.

Yet if Freeman's diagnosis of the disease is compelling, his proposed cure is not entirely satisfactory. Freeman follows the current trend for letting ecclesiology do all of the heavy theological lifting, and indeed, to swallow up other doctrinal concerns, a trait of the evangelical catholic and postliberal theologies which serve as his models. In short, Freeman sees the problems plaguing Baptists almost entirely on the horizontal level, so that the choice for communal versus individual forms of Christian existence becomes the central issue, with Freeman firmly advocating for a communal conception against the individualism of the faulty alternatives. All of that is well and good, but it is not fundamental, and the positions themselves require a dialectical tension. What is really needed is a delineation of the relationship between Christ and the church, and how Baptist theology is to understand that relation, which is more determinative than the prior one.

And this leads to a second problematic element of Freeman's proposal: the slippery manner in which the word "catholicity" operates in his work. On one level, it simply seems to be an appeal to draw upon the universal church's past. As such, while there may be many on the Baptist right and left who would have little interest in this, it is a call that most of the early Baptists could have embraced. For them, the church did not begin with the baptism of John Smyth, and their confessions could at times draw quite profligately from other traditions present and past. But at times in Freeman's book, "catholic" seems to slip over more firmly to those things that are parochial to Roman Catholicism, and here matters become more complicated. For it is not, pace Freeman, simply anti-Catholicism (i.e., anti-Roman Catholicism) that drives a push against proposals like his, though that is also often true. It is, rather, the lack of precision to specify what exactly is being propounded, and what is to be embraced, and what criterion governs the acceptance and rejection. Freeman's appeal to creeds as resources for biblical interpretation is such an example. While a worthy challenge to Baptist life, Freeman's juxtaposition of Scripture and creeds as "mutually reciprocal" rather than as asymmetrical, distinguished, and carefully ordered would be problematic for Baptists past and present to accept, even those sympathetic to his diagnosis. While Freeman calls for a rich appropriation of the catholic (Catholic?) heritage, he does little to address how and why Baptists are part of the Reformation tradition; he never really faces up to the fact that Baptists were after all Protestant.

None of this should call into question the importance of Freeman's book. But as excellent books are better engaged than extolled, such questions must be put forward in order to take the project itself with the seriousness it merits. It would be a gross mischaracterization to see Freeman's book as only for Baptists, though every Baptist would do well to read it. Whether there is enough of a Protestant principle remaining in his proposal to preserve a Baptist identity that is not swallowed up in an amorphous catholic substance is a question to be pondered—so also, whether ressourcement is a sufficient cure for the disease.