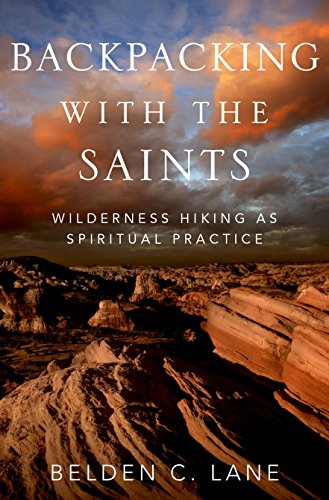 On the Hammock, Reading About Wilderness Wanderings

Hiking as a spiritual practice.
March/April 2016

A decade ago, I was writing about the spiritual values served by the Wilderness Act, which Congress passed in 1964 to preserve lands "where man is a visitor who does not remain." The legal prohibition on cars and roads in wilderness areas had its intended effect, for I had never actually visited one. I needed to remedy that omission, both to boost my credibility in writing about wilderness areas and to share in the profound spiritual experiences that so many writers have recorded in the pages of the Bible and across the centuries. So I arranged to fly to Oregon a half day early, and I immediately set out for the Gifford Pinchot National Wilderness Area across the Columbia River in Washington. I parked at the trailhead in the national forest; a three-mile hike would allow me to cross the official wilderness border and, so I thought, immediately experience all that I had read about.

It didn't turn out that way. It was a beautiful day in late May, which meant that there was hardly any snow on the trail as I set off on my hike. Soon I encountered a bit more snow as the trail slowly gained elevation, and after about an hour I arrived at a beautiful mountain lake. I rested and enjoyed the solitude and the spectacular views before setting out once again for the nearby wilderness border. Ten minutes later I was still struggling to find the trail in snow that was now at least a foot deep. The lake was still just behind me, so I glanced at my vintage digital camera to review the photos that I had taken minutes before, hoping that I could identify the trail from the perspective shown in the pictures. No luck. And then it hit me. I was alone in the forest, my cell phone didn't get a signal, it was late afternoon, and I was absolutely unequipped for anything more than a short, leisurely hike. As I imagined what my family would think back in Indiana as they heard the national news of a lost hiker in Washington, I realized three things that could facilitate my escape. I knew that the first part of my hike was all uphill, so I needed to head back downhill. I knew that I been hiking straight north, so I could watch the setting sun to the west to ensure that I hiked south. And I prayed. An hour later, I returned to the state highway where I had begun my hike, albeit a mile away from my car and limping after I had wrenched what I had previously affectionately described as my "good" knee. I never actually reached the "wilderness," but that was my wilderness experience.

Belden Lane would have laughed at me. My hapless three hours in the forest unfolded precisely as he predicted in Backpacking with the Saints. "Imagine a typical scenario," he writes. "Plunging deeper into the woods, you notice the trail becoming harder to follow. You have not been paying attention to where you've been walking … . You decide to double back for a hundred yards, but still nothing looks right." Then it hits you, and "your heart rate increases, shallow breathing begins, your palms start to sweat. 'RUN, don't think,' the brain shouts. 'For God's sake, you don't want to be lost out there.' "

What happens when you read an explosive text in a comfortable place?

That is where the similarities between my pathetically short experience and Lane's years of wilderness wanderings end. I don't backpack, and although I've taught at a Catholic university for seventeen years, I remain seriously deficient in my reading of the saints who came before me. Lane schools us on both. He takes us to wilderness areas, state parks, and other obscure Missouri landscapes near his home in St. Louis, while also venturing to several places in western states that better fit our stereotype of the wilderness. Even the names of the places suggest that something unexpected is at hand. The Irish Wilderness celebrates the 19th-century Catholic immigrants who settled in southern Missouri. The Medicine Bow Wilderness in eastern Wyoming is where Native Americans would gather to collect the mountain mahogany that provided the best wood for making bows. "Gunstock Hollow," Lane notes, "fits the hard-core romanticized image that people have of rural Missouri—a place where moonshine distillers have been replaced by meth cookers, where desperados like Jesse James have morphed into the criminal mania of backwoods communities steeped in the drug culture."

At each stop, Lane introduces us to a saint. They include, by Lane's counting, "an early Celtic saint, five Catholics, four Protestants, a Buddhist, a Hindu, and a Sufi Muslim," along with a sprinkling of the Desert Fathers and Mothers. Some were familiar to me: Søren Kierkegaard, Martin Luther, Mohandas Gandhi, and Thomas Merton. Others were new: Thomas Traherne, a 17th-century English poet who "is one of the grandest celebrants of desire in the history of spirituality"; Thich Nhat Hanh, a Vietnamese Buddhist monk "heralded by Thomas Merton as a man uniquely able to join the teachings of Jesus and Buddha"; and Jelaluddin Rumi, a 13th-century Muslim poet whom Lane extols as a "down-to-earth, exuberant, God-intoxicated hiking partner." I was most surprised by Dag Hammarskjold, whom I knew as the UN Secretary General who died in a tragic plane crash, but whom I did not know as an inveterate climber of his native Swedish mountains.

Lane organizes his experiences around the four legs of a wilderness journey: departure, discipline, descent, and delight. Those legs are further divided into chapters on such topics as disillusionment, desire, mindfulness, failure, and community. Think of it as going for a hike with Richard Foster as you celebrate his disciplines. Mix it all together, as Lane explains, and each chapter "offers an account of a backpacking trip to a particular place, along with the writings of a saint and a theme from the Desert Fathers associated with the experience of the journey."

The combination of backpacking and saints is central to the book. Lane claims that "[t]he place where you encounter a book indelibly affects the way you receive it." Even more: "Potentially revolutionary changes occur when people read explosive texts in unsettling places." Fair enough. I read Backpacking with the Saints in airplanes, on the hammock in my back yard, and in the overstuffed easy chair next to the window looking out on my suburban front yard. No backpacks, and no saints, were in sight. Perhaps I was putting Lane's book to the ultimate test: what happens when you read an explosive text in a comfortable place?

Lane's prediction of my failed trip appears in his chapter on fear. There Lane takes us to the Maze District of Canyonlands National Park in southern Utah. Canyonlands is the wildest of Utah's five national parks, and the Maze is the wildest of the park's three distinct districts. Lane quotes Backpacker magazine's description of the Maze as "the most difficult/dangerous trail in America." We are accompanied by John of the Cross, a 16th-century Spanish Jesuit who suffered for much of his life under the Spanish Inquisition. Lane reports that John lived "secluded in mountain monasteries, writing commentaries on his poetry and taking his brother monks up into the foothills of the Sierra Nevada for days of solitude and prayer." One of John's books, The Dark Night, helped Lane to address his own fears. In the prosaic setting of a Marriage Encounter weekend, Lane struggled to engage the anger that he still carried from his father's suicide years before. "To my amazement," Lane writes, "my outpouring of rage was accompanied by a sudden and overwhelming sense of my father's love … for the first time. Love arrived in the moment I allowed anger to vanquish fear."

Another chapter addresses justice, a topic nearer to my legal career. Times Beach is the destination here, a place that sounded vaguely familiar to me, though I couldn't remember why. Lane soon explains: Times Beach began in the 1920s as a summer resort just south of St. Louis, but it did not gain national attention until the 1970s, when the town hired a local hauler to spread oil on the dusty dirt streets. The "oil" proved to be mixed with waste from a nearby chemical factory that had manufactured Agent Orange during the Vietnam War. Eventually, the EPA spent $150 million to relocate the town's 2,000 residents, eliminate any trace of the town, and replace it with the Route 66 State Park. As Lane quips, "A town that was once a town and a road that was once a road have both known better days."

The justice aspects of the Times Beach story are as confusing as anything that one could encounter in the Maze of the Canyonlands. I spent several years as an attorney representing the EPA in similar cases involving disputes about who should pay to clean up wastes that were disposed years ago. Who should bear the cost of what happened at Times Beach? The company that made the Agent Orange under the strict direction of the military? The waste hauler who sprayed the chemicals around Times Beach, not knowing the danger involved? The people of the town who sought to save money by spraying oil instead of simply paving the streets? Or all of us, as we collectively authorized the military to employ Agent Orange during an increasingly unpopular and unsuccessful war? The final irony, as Lane notes, is that the $150 million cleanup may have been unnecessary. The threat posed by the dioxin—the active ingredient in Agent Orange—"might not have been as severe as first thought."

Lane's previous book, Ravished by Beauty, tells the story of how the Reformed faith is deeply connected to natural beauty. I had not anticipated a sequel this much since the release of High School Musical 2. Backpacking with the Saints is different from Ravished by Beauty (and, for that matter, from High School Musical). It is more personal, more instructive, as befits the sharing of a lifetime of journeys and a lifetime of devotional reading. Lane describes himself as "a recovering scholar" with "an ugly habit of reading and writing to impress others." In other words, he is just like nearly everyone who reads or writes for Books & Culture, not to mention thousands of other academic journals and scholarly monographs. He knows his audience.

Lane is now retired from Saint Louis University after an illustrious career. I'll look for him if I have the opportunity to visit his beloved Missouri wilderness lands, or if I overcome my fear and journey into the Maze. And I hope he'll look for me if he ever finds himself wandering along a snowy trail in Washington.

John Copeland Nagle is John N. Matthews Professor at the Law School of the University of Notre Dame. He is writing books about the scenic value of national parks and about the relationship between humility, Christian teaching, and environmental law.