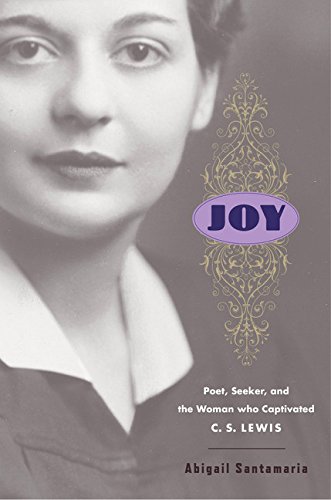 The first full life of Joy Davidman in a generation.
March/April 2016

A bigail Santamaria's Joy is the first comprehensive biography of Helen Joy Davidman in a generation—Lyle Dorsett's still reliable And God Came In: The Extraordinary Story of Joy Davidman appeared in 1983. As such, Joy benefits from 30 years of critical reflection. In her introduction, Santamaria sets the overall tone of her biography, arguing that "most [previous] accounts of [Davidman's] life seemed glazed with a kind of hero worship." Perhaps Santamaria has in mind the 1993 film Shadowlands, starring Anthony Hopkins and Deborah Winger. However, that film claimed only to be based upon a true story—at best it is a docudrama. Dorsett's earlier biography of Davidman is respectful but clear-eyed; he certainly does not suggest she was a saint. Moreover, C. S. Lewis's most able biographers, George Sayer and Alister McGrath, have little good to say about Davidman. Regardless, Santamaria adopts a critical lens through which to view the details of Davidman's life.

Santamaria deserves much praise for her careful research and her success in gaining access to heretofore little known or closed primary sources; in doing so, she advances in great detail matters of Davidman's life that up until now were only outlined. For instance, Dorsett pointed out that Davidman's early home life was shaped by her domineering and perfectionist father, Joe. Santamaria fleshes out the background of Joe's personality, noting that in his role as a junior high school principal "he was such a tyrannical bully that in a single year, twenty-two members of his staff requested transfers, including his own former seventh grade teacher." At home with Joy and her younger brother, Howard, a similar iron discipline was applied. If Joy brought home a less than perfect grade, her father would slap her. When Joy's second semester grades at Hunter College were a mixture of B's, C's, and D's, Joe slapped her face. This time, however, "Joy flung herself forward and scratched his face with her nails. Joe never touched her again." Given the tension of her relationship with an overbearing, demanding, and controlling father, it is little wonder that she rebelled against Joe and everything he stood for.

Other aspects of Davidman's life that Santamaria plumbs in depth include her years as a devoted member of the Communist Party of the United States of America (CPUSA), her six-month tenure as screenwriter in Hollywood, her work as an editor for New Masses (the semi-official magazine of the CPUSA), her involvement in the leftist writers organization, the League of American Writers, the early life of her first husband, William Lindsay Gresham (Bill), their marriage and subsequent fascination with L. Ron Hubbard and Dianetics, and eventually her gradual disaffection for Gresham and the breakup of their marriage. Readers interested in discovering more about these elements of her life have much for which to thank Santamaria.

Once Santamaria begins to concentrate on Davidman's desire for a relationship with Lewis, the tone of the biography takes on a noticeably critical perspective. Santamaria suggests Davidman pursued Lewis with pathological intensity. Determined to seduce him, Davidman was rendered "beyond self-control and reason." In her obsession, Davidman sailed for England with "urgency," abandoned her motherly responsibilities, knew that in her absence an sexual affair would occur between Bill and her cousin, Renée, spent money recklessly (thus unfairly burdening Bill), threw herself at Lewis, fantasized about a future with him, played the innocent victim, consistently engaged in self-deception, and fabricated the details of how her marriage to Bill fell apart—it was "a myth made of half truths, exaggerations, omissions, and self-pity—facts and fictions cast into a land of shadows."

In part, Santamaria's account of this sequence of events is based on her reading of the sequence of 45 love sonnets Davidman wrote to Lewis.[1] I believe it is fair to read these sonnets at least in some ways as biographical; in fact, I think the sonnets served Davidman much as a journal would for other writers. Although each sonnet is complete in itself—telling its own little story—it is easy to discern a larger story or narrative as we read through the sequence. Accordingly within the sequence many of the sonnets are "conversational"; that is, sometimes Davidman is speaking to herself, sometimes to Lewis directly or indirectly, sometimes to God, sometimes to former lovers, sometimes to no one in particular, and sometimes to several of these at the same time. Throughout the sequence, Joy's narrative tone or mood vacillates between despair and hope, anger and resignation, desire and shame, longing and self-denial, scheming and confessing, plotting and humiliation, eros and agape, passion and reason, the flesh and the spirit, a fierce desire to possess and a frustrated acquiesce to give up, and desperation and resolution.

Santamaria's tone softens after there is an established relationship between Davidman and Lewis. She points out that Davidman became something of a literary confidante, particularly via her work on his autobiography, Surprised by Joy (she typed out the complete typescript): "Jack now trusted Joy implicitly with his manuscripts. As Surprised by Joy proceeded through production, he directed his editor to discuss the proofs with her directly." Santamaria traces the way Lewis became more and more comfortable with Joy's integration into his life, and she charts effectively how Lewis's feelings of friendship for Davidman moved him to marry her in a civil ceremony on April 26, 1956. Once Davidman's bone cancer was discovered, Santamaria chronicles to great effect the way in which Lewis came to realize how much he loved Davidman. At one point he wrote a friend: "You could hardly believe what happiness, even gaiety, there is between us." Phileo moved on to eros, and eventually to a second, bedside ecclesiastical marriage. Joy concludes poignantly by covering the three years of happiness Lewis and Davidman shared before the cancer returned and took her life.

Readers may quibble with some of Santamaria's interpretations of events in Davidman's life. For example, she argues that the breach in Davidman's relationship with Bill can be traced to her conviction that he had been sexually unfaithful with Phyl Haring, a lesbian friend of the couple. Yet when Davidman sailed to England in 1952, she stayed in Haring's London flat. It seems inconceivable that Davidman would have stayed with the woman she believed Bill had slept with. Another instance is Santamaria's contention that Davidman knew Bill and Renée would have an affair while she was in England. Yet if that was the case, why was Davidman apparently so heartbroken when she learned of the affair?

Such quibbles aside, Joy is an earnest, well-researched portrayal of the woman who captivated the heart of C. S. Lewis. Perhaps it is best to give Davidman the last word. Her poem "A Sword Named Joy," written on February 23, 1953, intimates how deeply she longed for his love:

If you love me as I love you,
No knife can cut our love in two!
On Christmas Day I gave my lord
An old and wicked Persian sword
To cut his finger on; and he
Did cut it most obligingly,
But would not let me kiss it well.
On Christmas morning it befell,
And all the bells of Oxford then
Were crying goodwill unto men!
O it was very bad indeed
To bring a gift that made him bleed,
It was unchristian and inhuman;
But still, the creature's name is woman—
A knife is a true lover's gift,
Old poets say; and so with thrift
She saved her pennies, had no rest,
Till she had found of knives the best,
Curved as sweetly as her breast.
And he has hung it on his wall,
And yet, he loves her not at all.
If you loved me as I love you,
No sword could separate us two!

Don W. King edited the letters and the poems of Joy Davidman. His most recent book is Yet One More Spring: A Critical Study of Joy Davidman (Eerdmans).