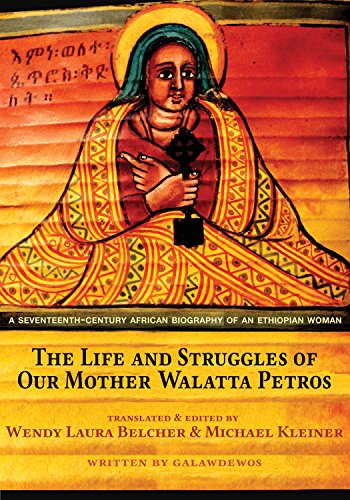 The Life and Struggles of Our Mother Walatta Petros: A Seventeenth-Century African Biography of an Ethiopian Woman
Galawdewos
Princeton University Press, 2015
544 pp., 39.95

The life of Walatta Petros.
March/April 2016

I am contemplating writing a wild historical romance. Here is the premise. European travelers stumble into a lost valley where the world of the later Roman Empire survives intact, a thousand years out of its time. The kings bear such exquisitely Byzantine names as Sisinnios and Basilides, while the church still reads ancient Scriptures lost to the rest of the Christian world.

Far-fetched it may sound, but what I am describing, without exaggeration, is the kingdom of Ethiopia that Latin Catholics encountered during the 16th and 17th centuries. Across Africa and Asia, Western Christians in this era discovered many ancient Christian churches, which they tried to persuade or cajole into recognizing Papal supremacy and Catholic orthodoxy. In some cases, they succeeded at least in part—witness the Chaldean church of the Middle East, the Maronites of Lebanon, or elements of India's Thomas Christians. One immediate consequence of the new globalization was an intense warfare against manifestations of Christian diversity.

Nowhere, though, did these attempts to gather in the lost sheep of the new Israel encounter such ferocious resistance as they did in Ethiopia, where the historic church followed many practices that westerners found bizarre or upsetting. Most fundamentally, the church was Miaphysite, rejecting the Council of Chalcedon and aligning with the Egyptian Copts. (It remains today the Tewahedo, "Oneness," Church). Many church customs—the Saturday Sabbath and the prohibition of pork—retained the imprint of ancient close dealings with Jews and Judaism. Moreover, the Ethiopian Bible canon included such once-influential Jewish scriptures as 1 Enoch and the Book of Jubilees. It was rather like opening a time capsule and discovering the world of primitive Jewish Christianity, still fully functioning. Catholics dreamed of restoring the Ethiopians to the fold, before purging their church of all those unacceptable texts and habits, much as their European counterparts were currently doing in India and Mesopotamia.

The problem, though, was that the Ethiopian church was intimately allied to a mighty Christian state, which had the power to regulate or suppress European intruders if it so chose. Jesuits in particular sought to evangelize the Christian empire in the Papal cause, and for a while, it looked as if they might succeed. From 1555 through 1663, there was notionally a Latin Patriarchate of Ethiopia. The mission entered a new phase with the arrival of missionary Pedro Páez, who in 1612 won over the emperor Sisinnios (Susenyos) to the Catholic cause. Spiritual arguments apart, the Roman alliance enhanced the likelihood that Ethiopia would be able to draw on European allies in their endemic struggles against Muslim neighbors. Surely, thought the Jesuits, Susenyos was a new Constantine, who would bring the true church to political power! True enough, in 1621, the emperor publicly affirmed his new Catholic, and actively prohibited the teaching of the church's traditional doctrines.

Yet early missionary optimism proved ill founded. The new ruler, Basilides (Fasiladas), restored the old ways, and rebuilt ties to Coptic Alexandria. The Jesuits were expelled in 1634, and thereafter, any pro-Roman intruder faced a gruesome martyrdom. In 1638, the martyrs included an archbishop with his two Jesuit companions. By 1665, Basilides had ordered the burning of all the "Books of the Franks"—that is, the Latin Catholics. The story closely recalls the Jesuit disaster in Japan in these very same years, the saga recounted in Shusaku Endo's novel Silence. Basilides in turn went on to become one of the empire's greatest rulers, whose capital at Gondar remains one of Africa's historic glories.

We can view the Ethiopian story through any number of lenses. We might for instance see it in terms of aggressive and intolerant European imperialism, or as an early example of the conflicts that inevitably stem from cultural globalization. And just how startlingly global that world was must be stressed. The Jesuit martyr Abraham de Georgiis was born in Aleppo, Syria, and he subsequently worked in Portugal and southern India before meeting his end (at Muslim hands) in Ethiopia in 1595. The number of opportunities for intercultural conflict was nearly limitless.

Or else, we can apply a perspective that sounds remarkably modern, as a struggle for distinctive African Christianity, against European incursions. How much more relevant such an account might sound if told though the eyes of an African woman. And that, in short, is what we have in The Life and Struggles of Our Mother Walatta Petros, a nearly unbelievable historical survival from a tumultuous age. Written in 1672 by an Ethiopian monk named Galawdewos (Claudius), it appears here in readable and sumptuously illustrated form, translated, edited, and interpreted (with the assistance of Michael Kleiner) by historian Wendy Belcher, who has previously edited the letters of the Jesuits in Ethiopia.

Walatta Petros was born of aristocratic stock in 1592, and she was literate. Her name, "Spiritual Daughter of Peter," closely echoes the common Irish form "Servant of" (Gilla), as in Gilchrist (Servant of Christ). In this, as in so many weightier matters, the more familiar one is with the historic Celtic churches, the easier it is to understand the particular traditions of Ethiopian Christianity.

When Susenyos made his historic shift to Catholicism, Walatta Petros' husband was tasked with suppressing the rebellion that inevitably erupted. She, though, remained faithful to the old church, and was staunch in her public defense of its teachings, even at the risk of her life. As Belcher shows, Ethiopia was well used to powerful queens and women leaders: how could they not be, when the dynasty claimed descent from the Queen of Sheba? Noble women in general produced some of the Jesuits' most active foes. Not surprisingly, the same women who feature in native accounts as courageous saints are depicted in European records as (literally) devil women.

In 1617, Walatta Petros abandoned her family commitments to become a nun, establishing several new religious communities as refuges for traditional believers. Drawing as it did from ancient Coptic and Syriac origins, monasticism was prominent in the Ethiopian church, but it lacked the disciplinary forms that we know from Benedictine Europe. In fact, reading the Life and Struggles, we often have to remind ourselves that the actions are taking place in 17th-century Ethiopia, rather than in the Syrian desert (say) in the 4th century.

Walatta Petros lived to see the church's orthodoxy restored, while she herself experienced the new burdens and tribulations of supervising her monasteries and nunneries. As a heroine of the faith, she was widely credited with miracles and holy deeds on very familiar lines. Obviously, she warred constantly with the Devil and his earthly agents. She raised a monk from the dead, she "stopped the sun, rain, and ale," she healed a monk of paralysis, she saved another from drowning in a lake. She regularly received visions from angels and the Virgin. Winningly, on most such occasions, the author stresses how well attested such incidents were, suggesting that he was dealing with an audience somewhat inoculated to claims about spurious miracles.

Chiefly for her leading role in ensuring her church's survival, Walatta Petros is regarded as a saint. She had been a key warrior for orthodoxy at the time "when the Roman faith happened in our country, and the Christian faith was lost." When Galawdewos wrote her gädl, her spiritual biography, his work was rooted firmly in the recollections of monastics who recalled her directly. In fact, suggests Belcher, we should see it not so much as a vita sancti, on European lines, but rather an exercise in collective oral history.

Although this is by definition hagiography, there is no reason to challenge the general accuracy of the Life and Struggles of a tough, canny, and genuinely heroic woman. As Belcher remarks, the book was written "in an African language by Africans for Africans about Africans—in particular, about a revered African religious leader who led a successful non-violent movement against European proto-colonialism in Ethiopia." (She does justify the "proto-colonial" label, which we might at first be tempted to dismiss as anachronistic.) Few indeed are the Western historians—and fewer still the church historians—who might have expected such a thing from this era, written as it was during the lifetime of John Bunyan, Increase Mather, and William Penn.

Unfortunately, some sexual themes in the Life and Struggles have spawned controversy, not least among Ethiopian readers who accuse Belcher of introducing Western sexual obsessions into the African context. In one scene, Walatta Petros describes observing some young nuns "behaving lustfully" with each other, and it is suggested that perhaps she herself felt temptation. The translation seems beyond argument, although it is scarcely scandalous to suggest that particular monastics might behave badly, or might feel the need to wrestle with sinful impulses. Incidentally, that story probably represents the earliest literary depiction of lesbianism in Africa.

Still more contentious is the 25-year relationship that the book describes between the saint and her (woman) ally and associate Eheta Kristos. The two "lived together in mutual love, like soul and body. From that day onward the two did not separate, neither in times of tribulation and persecution, nor in those of tranquility, but only in death." Some readers and media outlets have read that in terms of a same-sex union. Belcher resists extravagant claims, but rather asserts that "the text represents [these] women's relationship with each other as a love story [between] a holy and celibate couple who struggled with being chaste." I would quibble with the "love story" term, because this language of love was common to so many early saints' lives, without the slightest hint of romance or sublimated sexual desire. Still, every nun who ever passed through a Western convent would assuredly recognize here a "particular friendship" of the sort that religious houses always strove to discourage.

Belcher makes an excellent case for the importance of Walatta Petros as a person, but more generally, she urges us not to see this single story in isolation. As she says, Walatta Petros might have been exemplary, but she was not unique. Any account of Christian history has to pay due attention to Ethiopia, and to this literate African society that was so integral to the faith's development in the Middle East. In the later Middle Ages, savage wars with Islamic neighbors all but destroyed much of Ethiopia's visual and literary heritage, leaving us to speculate about the origins of many sacred sites and buildings. Even so, more than enough evidence remains to suggest the scale of that nation's contribution to Christian culture. Just dipping into Belcher's commentary indicates the very substantial scale of the surviving literary corpus with all its varied genres and currents. Virtually all these works remain inaccessible to those without the knowledge of local languages. In that sense, reading this book can be a humbling experience.

By 2050, Africans will constitute around a third of the world's Christian population, roughly a billion people, and over a hundred million of those will live in Ethiopia. As we confront that new reality, the need to rediscover those African cultural and spiritual roots becomes imperative. The story of Walatta Petros is a wonderful contribution to this task.

Philip Jenkins is Distinguished Professor of History at Baylor University's Institute for Studies of Religion. He is the author most recently of The Many Faces of Christ: The Thousand-Year Story of the Survival and Influence of the Lost Gospels (Basic Books).