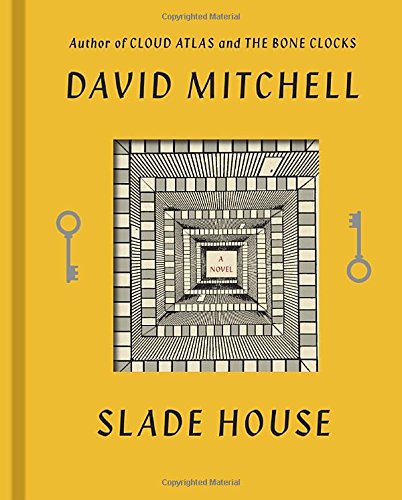 "Tonight feels like a board game co-designed by M.C. Escher on a bender and Stephen King in a fever." So says Sally Timms, the third narrator in David Mitchell's latest novel, and the critics have fallen in line behind her, trying to come up with other hypothetical collaborators who might, between them, approximate the textured surrealism of Slade House. Joe Hill, for instance (himself a gifted author of weird tales, among other things, and the son of Stephen King), remarks that, "in some ways, this book reads as if Wes Craven hired Umberto Eco to reinvent A Nightmare on Elm Street. Yet," Hill continues, "that doesn't quite do [it] justice." I cannot figure out how to do Slade House justice either except to say that it feels as if David Mitchell happened upon a false bookshelf in his previous novel, The Bone Clocks, and that it reads as if he inched just the right tome forward and found, when the fixture swung to, another plot, intricately folded—and then he wrote the hell out of it. Or, more accurately, into it.

That plot is as follows. Every nine years, down an alley in London, a sturdy iron door materializes for a single day, interrupting an otherwise innocuous stone wall. Those behind the door—Slade House's villains—call the occasion "Open Day," and they leave the entrance unlocked.

Thus, over the years, Mitchell's narrators gain easy access to Slade House. The first to arrive, in 1979, is an intuitive and unhappy adolescent, Nathan Bishop. Next—but not soon—the slick and unlikable detective Gordon Edmonds ducks through the low portal. Then, almost a decade later, an attentive but unattractive college student named Sally Timms follows the police officer through the aperture. And as surely as the slow parade continues, right up to 2015, no one who marches (or shambles) in can dodge the evil, avid leeches who possess Slade House.

Slade House, it turns out, is an "orison"—and here, for those who have not read The Bone Clocks, is a working definition: an orison is a mirage projected as a "live, 3D stage set"; it is a virtual reality protected by an almost tamper-proof "reality bubble"; it is a spell, a trap, a "scripted vision."

More to the point, an orison is a vivid fiction that has the potential to swallow one whole. Which means that if Slade House is an orison, Slade House is, too. Admittedly, the novel's quarry have less to lose than those tricked onto the property from which it takes its name. Slade House's readers risk the creeps. Its characters risk themselves.

That said, both its readers and characters will fret over half-familiar echoes. Some of these echoes' sources lie almost in earshot, among them the sure voices of the Slade House's ghosts and the incongruous heralds of its periodic incarnation (a jogger, an ambulance). Some of the novel's resonances, however, have far more distant sources. Indeed, via interesting distortions, Mitchell's prose pays or incurs debts to earlier writers and time-honored genres. This narrative's echoes also, however, ricochet from Mitchell's earlier fictions. Slade House, in other words, borrows from its author's prior ventriloquists: the cast, yes, of The Bone Clocks, but also characters from the foregoing novels.

As to Slade House's sampling Mitchell's repertoire, I'm not sure what to make of it. For, were this book not haunted by those prior novels, I would think both more and less of it.

I would think less of it for the obvious reason: because it is a formidable thing—a dazzling thing—to watch a writer go about assembling a fictional world. By way of analogy, let me say that my wonderment at David Mitchell's fiction behaves a lot like my wonderment at Dmitri Mendeleev's periodic table. That is, I cannot look at either man's work without imagining him in the thick of half-seeing the system he began by construing from thin air. I imagine both Mitchell and Mendeleev populating, by trial and error, a catalogue of the known and the possible. I imagine both spotting unmistakable, episodic patterns and sizing up the gaps in their schemata. I imagine both cribbing from the certain in order to corner the unguessed-at. Of course, with Mitchell there's less call for me to practice imagination than there is with Mendeleev. I get, albeit from the cheap seats, to watch him work—mid-invention, mid-deduction, book by book—and it dumbfounds me.

Then again, were it not for Mitchell's other fictions (Ghostwritten and The Thousand Autumns of Jacob de Zoet, Black Swan Green and Cloud Atlas, and so on), I would hold Slade House to a more reasonable standard—and thus make more of it. In particular, I would tout its smart plotting. I would explain that its five parts employ five different narrators and that, although each requires readers to assent to another detour, Mitchell never overtaxes his audience. He is ingenious in exploiting misdirection but also liberal in dropping hints, and he compensates the reader's disorientation with distinctly, convincingly drawn characters.

Which would lead me to characterization—because Slade House does conjure eminently believable characters. Each of them strikes me as vaguely familiar, but only vaguely. Put otherwise: no one in this book is a perfect embodiment of his or her "type." For example, although this novel's self-conscious adolescent throws stones into a pond to avoid eye contact, like hordes of adolescent boys before him, on watching the pebble go, he, like no one before him (save David Mitchell), thinks this gorgeous sentence: "Its arc is maths." By the same token, although Slade House's police detective is a bigoted divorcé going through the motions of hedonism, the writer refuses to surrender him entirely to stereotype. Instead, he gives Gordon Edmonds a vision of his soul, and the man's response is sufficient proof that he's a fed-up cop, sure, but he's more than his own "flesh-and-skin suit." "It's almost see-through," the detective says of his soul, "like gel, or egg white, and filled with shiny grains of dust, or galaxies, or … " and then he blurts out these two sentences, nearer prayer than blasphemy: "God, it's beautiful. Jesus, it shimmers." (It occurs to me that maybe what keeps Mitchell's characters from deteriorating into stock characters is that he lets each share his instinct for metaphor.)

Anyway. Were this the first novel from David Mitchell that I'd read, my amazement would stand in better proportion to its achievements. But, knowing what this novelist can do by way of characterization—take his novel Black Swan Green, which doesn't merely sketch its 13-year-old protagonist so as to prevent his fitting the available pigeonhole but renders for the young Jason Taylor an inimitable, believable self—or by way of design—take Cloud Atlas, which not only traverses genres and centuries but also tells a handful of stories compellingly enough that the author can interrupt them at their approximate middles, making the audience wait for the book's second half, in which each remembered tale concludes: well, such foreknowledge dulls my regard for Slade House, which seems unfair.

I do think it fair, though, to observe that Slade House owes significant debts to The Bone Clocks. Most pragmatically, readers of Mitchell's previous novel will come to this uncanny story with some helpful if not quite indispensable context. Still, what I would miss most acutely in this new novel, had I not read The Bone Clocks, I can't help but call by an old-fashioned name. I'd miss its moral compass. I'd miss it because Slade House, like its predecessor, plots a Manichaean war. Yet The Bone Clocks, unlike its diagonal sequel, ends by insisting that whatever happens when immortal principalities spar, we mortals will, in the end, be left to reckon with ourselves, with each other—which is as desperate a struggle if not as dramatic a prospect. Slade House, for its part, ends with an eerie thread left cleverly unknotted.

All told, inside Slade House, David Mitchell designs an ingenious hell smaller than a city block. Inside it waits a hungry, malign thing, snide in its ruthlessness—the kind of thing that sneeringly notes the irony when one of its intended victims drops "the 'deliver us from evil' bit" from his recitation of the Lord's Prayer. So, to be clear, it's not that Slade House is without a moral compass; on the contrary, readers could hardly mistake the book's directive to side with even the despicable mortals, given its monsters. And I would go a step further. I would argue that this novel underscores the value of human souls, all of them, and by extension, of all us bone clocks who play host to them.

But Slade House does not give us the means to read the magnetism of vice and the magnetism of grace, both of which sway us, and Ghostwritten does. The Thousand Autumns of Jacob de Zoet does. Cloud Atlas does. What Slade House gives us is a superb but static Rose of the Winds. My misgiving about this excellent novel, then, comes down to this: having received truer instruments from David Mitchell, I hoped for one this crossing, too.