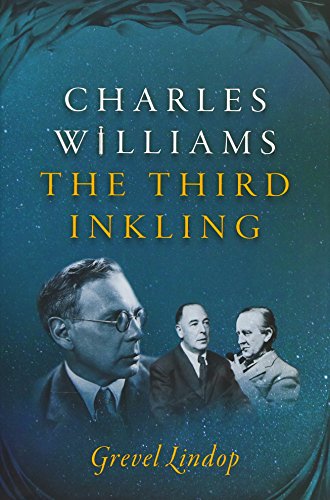 For the last decade, fans and scholars have been waiting for Grevel Lindop's biography of "The Third Inkling," Charles Williams (1886-1945): poet, editor, novelist, biographer, Anglican Christian, occult master, friend of C. S. Lewis, J. R. R. Tolkien, and T. S. Eliot. Due to many factors, his writing has not been as well known and widely read as his friends'. External factors include film adaptations of works by Lewis and Tolkien, better management of their writings by their literary estates, and the tireless and brilliant efforts of Douglas Gresham and Christopher Tolkien. Internal hindrances to Williams' fame include the lack of any children's books, his labyrinthine syntax, and the obscurity caused by the layers of occult symbolism. He has been not only the oddest Inkling, but an overlooked Inkling.

Yet Williams was a highly skilled and very distinctive writer, and there are many readers who would adore his books if once they found them. He was rather famous in his time, hobnobbing with Kingsley Amis, T. S. Eliot, Christopher Fry, Philip Larkin, and Dorothy Sayers, and being published by Faber and Oxford. He was a highly influential editor at Oxford University Press, doing much to shape the taste of the times via anthologies, introductions, and editions—including the first English translations of Søren Kierkegaard. He was a passionate, powerful teacher at evening literary institutes and later, despite not having a college degree, at Oxford University, where students clamored to have him as their tutor. He was a significant literary force in the 1930s and '40s; perhaps the time has come for a renaissance of his reputation.

Indeed, his name has been much in the presses recently. I recently published an early play of his (The Chapel of the Thorn) and am editing an essay collection entitled The Inklings and King Arthur; David Llewellyn Dodds is working on publishing Williams' Arthurian Commonplace Book; Lindop is talking about producing an affordable e-book of the Arthurian poetry; and the seven novels have been released as e-books by Open Road Media. Moreover, in 2016 Williams' works come out of copyright in the UK, so many of his writings will be readily available soon. Also, ITV aired a two-part episode of the detective show Inspector Lewis in October entitled "Magnum Opus": it was all about (a fictionalized version of) Williams' impact on Oxford and about the doctrines and rituals of his Christian, magical order "The Companions of the Co-inherence."

Thus, 2016 is the perfect year to read Charles Williams: The Third Inkling as well as some of his poetry, fiction, theology, and literary criticism. There is much to learn from and admire in both. There is also much to critique in Williams' private life—more of that anon.

Charles Williams: The Third Inkling begins with a dynamic portrait of Williams at his best: a dramatic, novelistic description of his lecture on Milton's Comus on February 5, 1940. This event solidified his reputation as one of the most exciting lecturers at Oxford during his prolific final years. It includes a speculative reconstruction of his initiation into the Salvator Mundi Temple of the Fellowship of the Rosy Cross, A. E. Waite's hermetic order, on Sept 21, 1917. This kind of imaginative reconstruction is not without precedent, especially in Inklings studies; Humphrey Carpenter includes a composite typical day in the life of J. R. R. Tolkien in his 1977 biography, and an imaginary Inklings Thursday meeting, complete with conversations culled from their letters and published works, in his 1978 work The Inklings.

The biographer, Grevel Lindop, studied at Oxford, taught at the University of Manchester, and is a practicing and published poet. His skills in research, prose, and poetry make this biography thorough, accurate, and readable—three qualities not often found in the same book. Biographical prose tends to be very strained, often forcing multiple, unrelated facts into the same sentence. Lindop's poetic ear forbids instances of ugly syntax. His sentences are smooth, precise, intelligent, and aesthetically pleasing, making the reading of this long book a pleasure.

He has clearly read all of Williams' writing thoughtfully—including the unpublished and less accessible archived works—and he weaves literary criticism into his biographical presentation. He achieves that most difficult of biographical tasks: shaping the facts into a narrative arc, telling a story without falsifying the randomness of actual human existence.

This is the tale of a life cut short. Williams died unexpectedly, at fifty-nine, just when he was beginning to gain the respect he believed he deserved. He was teaching at Oxford, and there was talk of making that position permanent. He was scheduled to preach at the campus church, St. Mary's. He was asked to speak on Shakespeare at Stratford-upon-Avon. He was planning his next novel and volume of poetry. He was growing into a mature style of verse. His friendships with Lewis and Eliot were deepening. He was making an impression on younger poets. He was talking about healing his marriage.

And then he died, a week after World War II ended in Europe. This is a tale about a man with huge potential: who he was, what he did, what he could have done, and what he did not do. He was haunted by poverty all his life, which drove him to accept any hack-work that came his way—reviewing mysteries, compiling pot-boiler biographies, editing anthologies, writing plays on commission—all in the hope of earning enough money to buy a new coat or get some dental work done. The result was that poetry always got pushed off, and the novels were always rushed, in the small hours of the night or odd corners of moments on the subway or during office hours.

It is difficult to review a biography without reviewing the character of its human subject. This is especially true when that subject is as strange, fascinating, creepy, and contradictory as Charles Williams. In such a case, it is easy to critique the man rather than the book. Indeed, Williams set himself up for harsh criticism by posing as a spiritual leader, living a double life of magical-sexual abuse of his disciples, and justifying his aberrations via theological convolutions. On one page, we may read of Williams' fine poems in praise of married love. On another, of his famous Oxford lecture on chastity. On yet another, we encounter a letter from the coworker with whom he was having some kind of S&M affair, suggesting that they buy "1 small cane, 1 delicate whip" and spend six hours "very pleasantly with dinner, a warm room, and the … purchases." It's easy to shout "Hypocrite!" at such a juxtaposition.

Alas, The Third Inkling confirmed all of my worst suspicions. Williams' affair with Phyllis Jones (a secretary at Oxford University Press) was longer-lasting and more sordid than previous materials revealed. Their relationship has always been called "platonic," and perhaps it was not fully consummated. However, she called it a "sex affair." She sat on his lap. They kissed. The volume and passion of their love letters is extensive. He once threatened to renounce Christianity if she left him. He used many women in rituals designed to heighten his creativity, and the biography makes clear the sophisticated reasoning by which he persuaded himself that his abusive actions were not only innocent, but actually virtuous and necessary for progress toward union with God.

His involvement with the occult was also more extensive than we have previously known; his magical experimentation (as opposed to the purely mystical) was probably considerable. Indeed, Lindop presents evidence that Williams may actually have been a member of the Order of the Golden Dawn, after all: he spent twenty years meeting with men who possessed and probably practiced high-level Golden Dawn rituals, and some of his habits and regalia do not match up with F.R.C. tradition. He hid all of this from his wife and from the Inklings, even while he brought it—along with his ceremonies of sexual transference—into his novels and poetry.

Lindop's biography does not wallow in Williams' sexual "addiction," his "compulsive pattern of dependency" upon magical rituals with young women, but it does present the facts. It is a valuable work of serious biographical research and analysis. It certainly helps its reader to understand Williams much better. And that is what a biography is for: to understand its human subject fully as a person. Charles Williams: The Third Inkling may not be perfect—it is not always in the clearest chronological order; it is sometimes a little difficult to match facts with sources; and internal organization is not as flawless as it could be, with section breaks often serving instead of smooth transitions. But as a work of biographical scholarship, The Third Inkling leaves little to be desired. I will reread it and recommend it to anyone else interested in the Inklings. Consider yourself warned, however: the tale it tells is a sad, wintry story of a troubled soul who gave much to others and kept little for himself.

Sørina Higgins is a English teacher, writer, editor, and Inklings scholar. Her blog, The Oddest Inkling, focuses on Charles Williams.