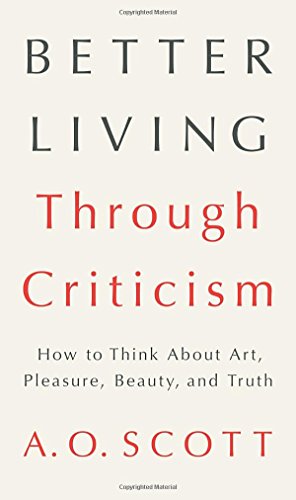 The Critic's Job and Why It Matters

Appreciating an art in its own right.

Better Living Through Criticism is not a how-to manual for aspiring critics, but something much better: an intelligent, lively defense of criticism itself and, thereby, a backdoor argument for bringing both one's intellect and gut to bear on one's experience of art. Which is simply to say that Scott wants us to act like humans—not merely brains on sticks, not only bundles of emotions—when we encounter the things that other people create.

That idea, that our brains are as important a part of the art-experience equation as our less rational feelings, reactions, preferences, and tastes, flies in the face of an oft-leveled criticism against, well, criticism: that it "intellectualizes" art and so takes the fun out of it. Doesn't interpreting art ruin the experience? Can't we just appreciate it for what it is? "This is an old and powerful—in some ways an unanswerable—argument against criticism, rooted in the idea that creative work should be taken on its own terms and that thought is the enemy of experience," Scott writes. "And it is indeed precisely the job of the critic to disagree, to refuse to look at anything simply as what it is, to insist on subjecting it to intellectual scrutiny."

That is because—to come back to the first point—criticism itself is an art form, the form that contends against and makes space for other forms. It's "for their own benefit," he writes, "and also to further its own aesthetic ends, to make its articulate noise in the world." Not one to understate the case, he continues: "[T]his means that criticism, far from being a minor, petty, secondary art, is in fact larger than the others. There is more of it, its scope is wider, its methods more protean than any of its rivals." In a sense, criticism is the ur-art. But criticism is also about art.

Ah, the old chicken-and-egg dilemma. So does art come first, or does criticism? Well, Scott points out, every work of art since the day after creation has been in some degree a response to what's come before—in fact, "[a] work of art is itself a piece of criticism," a struggle against and answer to its predecessors, to the "aesthetic norms and cultural purposes" around it. So all works of art exist, in some capacity, as works of criticism.

Or to put it another way: An artist's job is to pay extraordinarily close attention to the world around her—to nature, to beauty, to love, to politics, to the zeitgeist—and then articulate her experience to others through painting, dance, song, story, or visual narrative. Art starts when someone attends and then responds to life, as he experiences it. Some write pastoral poetry; others dance about love; still others make movies about power and oppression. An individual artist responds to whatever attracts and holds his attention; a great artist does so with an honesty that can come at great cost.

What attracts the critic's interest is art itself. We might say that criticism is always ekphrastic—it is art about art, and also art about the critic, just as art always has something to say about its creator. "The contradictory heart of the matter is that criticism is an art produced in reference to, and therefore in conflict with, other arts," Scott writes. He hypothesizes that "[f]rom the moment the primal human activities of making pictures, telling stories, dancing, and producing organized patterns of sound separated themselves from magic or religious ritual, it became necessary to judge, to compare, and to interpret the results." Who were the critics? The ones who "appeared to have paid close enough attention to have something to say about how such things had been done and should be done."

And so, the critic's job is to closely attend to works of art and then articulate their experience in the form of a carefully-constructed, skillfully-written argument. "Argument is as essential to criticism as volume is to sculpture and pigment to painting, or gesture and stance to stage performance," he writes. "But just as sculpture and painting are arts of the hand and acting is an art of the body, criticism is, above all, an art of the voice [… .] Criticism is not a matter of technique or form so much as it is a matter of personality, of whom you imagine is doing the talking."